Return to THE BLESSED MOTHER

Titles of Our Lady on GLORIES OF MARY 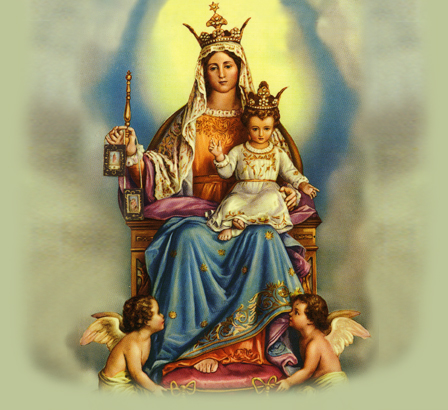 Titles of Our Lady on GLORIES OF MARY

A preeminent and altogether singular member of the Church

Above all the angels, immaculate, pure, at the right of the King thou shalt sit evermore. .

Adorned with all the gifts of the Holy Ghost.

After her Son, exalted by divine grace above all the angels and men.

After the completion of her earthly life, Mary was assumed body and soul into the glory of heaven.

All chaste and serene..

All of the glory of the King’s daughter is within, in golden borders, clothed round about with varieties.

Already in the first moment of her conception, filled with such an abundance of graces as to surpass the graces of all the saints.

Among the saints, she is the most holy.

Beautiful as the sun.

Beloved spouse of the Spirit of God.

Blessed art thou amongst women and blessed is the fruit of thy womb.

Blessed art thou who believed.

Blessed Mary ever a virgin.

Bride of the blessed Trinity.

Bride of the Holy Ghost.

Bride of the Spirit with his sevenfold gifts.

Bright as the sun.

Brightest glory of the human race.

Called blessed by all generations.

Cherished spouse of the Holy Ghost.

Chief support of the primitive Church.

Chosen from the ages.

Chosen spouse of the Holy Spirit.

Coadjutrix in the work of human redemption.

Compared with thee, the Powers are weakness.

Daughter of God the Father.

Daughter of the Eternal Father.

Delight of the Holy Trinity.

Descendant of kings, patriarchs and prophets.

Desired of all nations.

Elect and predestined from all eternity.

Endowed with all perfections and the whole range of infused virtues.

Ever glorious and blessed Mary.

Every manner of honor, of grace, of merit and of glory is found in Mary.

Exalted above all the choirs of angels and orders of saints.

Exalted above all things save only God himself.

Exalted by divine grace above all angels and men.

Exalted by God above all the choirs of angels.

Exalted in heaven above every living creature.

Expected by the patriarchs.

Fair spouse of Jehovah, whose Son is thy child.

Fairest amongst all the daughters of Jerusalem.

Fairest thou where all are fair.

Faithful to grace in the highest degree.

Favorite daughter of the Father.

First of all God’s creatures in heaven.

Flower of God’s choosing, that shall never fade.

Full of the Holy Ghost.

Gentlest of the gentle..

Glory of our race.

Glory of the Christian people.

Glory of the priesthood.

Glory of the works of the Almighty.

God has chosen and pre-elected her, and has made her to dwell in his tabernacle.

Great lady at the right hand of her Divine Son. reigning through all the ages of eternity. .

Greatest and most sublime of all creatures.

Greatest work of the Divine Majesty.

Handmaid of the Lord.

Heir of a royal line which goes back to Joachim, to Solomon, to David, to Jesse, to Abraham, to Adam.

Higher than the angels.

His companion for all eternity, possessing such a likeness to Him, that none greater can be possible between a God-man and a creature.

Honor, glory and firmament of our Church.

Honored with the glory of maternity.

Humble because she was all for God.

In Mary all created perfections, but in a most excellent manner and degree.

In thy conception, 0 virgin Mary, thou wast immaculate.

Incomparably greater than all other creatures.

Jesus is omnipotent of himself; Mary is all powerful through her Son.

Joy of the blest.

Joy of the universal Church.

Light of the faithful.

Loveliest whom in heaven they see.

More beautiful than the sun.

More glorious than the Cherubim.

More glorious than the supernal spirits.

More honorable than the Seraphim.

Most pure and holy of all creatures.

Mother and spouse of God.

Mother of the Eternal Son.

Mother of the only begotten Son of the Eternal Father.

Noble daughter, most beloved of our common Lord.

0 wonder, who, after all wonders, art still the most wonderful.

Powerful vanquisher of all heresies.

Prepared for himself by the Most High..

Preserved from the inherited guilt of original sin.

Rose of all roses.

Seat of all divine graces.

Servant of the Spirit.

She by herself is more like to her Son than all the saints together.

She obtains a splendor and eminence surpassing the excellence of all created things. .

So lowly in thine own eyes, but so great in the eyes of the Lord.

Splendor of all heaven.

Spouse and temple of the Holy Ghost.

Spouse of the Blessed Trinity.

Spouse of the Canticle of Canticles. .

Spouse of the divine Spirit..

Spouse of the Holy Ghost.

Spouse of the Most High..

The chosen one, who is to be acceptable above all creatures..

The crown and joy of all of the saints.

The daughters of Sion beheld her and declared her most blessed and queens have praised her. .

The desired of nations. .

The exaltation of humanity.

The fairest of all creatures.

The fruit of benediction.

The glories of Mary for the sake of her Son.

The glory of Jerusalem.

The glory of paradise.

The great honor of our people.

The greatest of women and none can compare.

The Holy One who will be born of thee shall be called the Son of God.

The honor of our race.

The honor of the martyrs.

The honor of us all.

The immaculate virgin mother of God, after completing her earthly course, was assumed body and soul into heavenly glory.

The joy of Israel.

The joy of our country.

The most illustrious glory and ornament, and most firm guardian of the Holy Church. .

The one blessed beyond all others.

The one without the slightest stain.

The praise of the prophets and apostles.

The true and only spouse of the Holy Spirit.

The victor in all the battles of God..

The virgin Mary is taken up to the heavenly chamber, in which the King of Kings sits upon his starry throne.

There is an infinite difference between God’s servants and His mother.

Thou art blessed and venerable.

Thou hast begotten life and glory for all generations of men.

Thou has far excelled every other work of God.

Thou hast found grace with the Lord. .

Thou lookest down on the lofty seats of the Thrones.

Thou wast far purer than any other creature.

Through grace perfectly free from every stain of sin.

Thy rank taketh precedence before the rank of the Principalities.

Veiled glory in this lampless universe.

Victor over the serpent.

Victress in all God’s battles.

Virgin Mary, Mother of the Church.

Whom all generations shall call blessed.

Without equal among things created.

Woman clothed with the sun.

Worthy throne for the Divinity.

Permanent link to this article: https://luisapiccarreta.com/the-blessed-mother/titles-of-our-lady-on-glories-of-mary/