How did the Bishop of Myra become “Saint in Bari”?

12/4 And more on St. Nicholas, co-patron of Bari, Italy along with San Sabino 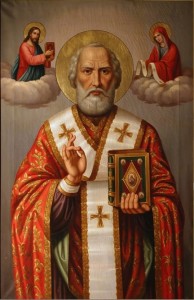 The charm of Nicholas is fueled by the mystery about his origins, since very little or nothing is known of his family or childhood. He was probably born in Patara in Lycia (today’s Turkey), between 261 and 280, from Epiphanius and Joanna who were affluent Christians. He grew in an environment of Christian faith, but lost his parents prematurely because of the plague, and became therefore a wealthy man. About that period is dated the so-called Miracle of the three girls, masterfully represented by a painting of Sebastian Dayg (1525), as well as by Beato Angelico.

At this point however history fades into legend: a nobleman of Patara had become poor and decided to start his three daughters of marriageable age into prostitution because he could not marry them decently; Nicola learned of that situation and on three consecutive nights threw into the man’s house three cloth bundles full of gold coins, so that the three girls could have a dowry. On the third night the father stayed awake to discover who the benefactor was, but Nicholas asked him not to reveal what had happened. Also for this episode he is revered as a protector of children.

Later on, Nicholas left his hometown and moved to Myra (now Demre, Turkey) where he was ordained as a priest. On the death of the metropolitan bishop of Myra, he was hailed by the people as the new bishop. Imprisoned and exiled in 305 during the persecution by Diocletian, he was later freed by Constantine in 313 and continued his apostolic activity. It is not certain that he was one of the 318 participants at the Council of Nicea in 325: according to the tradition, however, during the Council he condemned Arianism defending the Catholic faith, and in a rush of rage he is said to have slapped Arius. The writings of Andrew of Crete, and Johannes Damascene confirm his faith was rooted in the principles of Catholic orthodoxy.

A famous episode in the life of Nicholas took place when Roman troops commanded by General Nepotianus, Ursus and Erpilion stopped at Myra during an expedition to quell a rebellion in Phrygia. The presence of soldiers in the city created riots, and in the ensuing chaos, the corrupt governor Eustathius agreed to condemn to death the three innocent generals. The execution was stopped by the bishop personally. However, upon their return to Constantinople, the three generals who had quelled the uprising were hailed as winners and this aroused the jealousy of the prefect Ablabius who organized a conspiracy, took them prisoners and sentenced them to death without trial. The three remembered the Bishop of Myra and implored his help: at night Nicholas appeared in a dream to both the prefect and the emperor threatening them of dire punishments if they had harmed the three innocent men. Once released, the three generals went to Myra to say thanks to their savior.

St. Nicholas died at Myra on December 6, presumably in the year 343.

Permanent link to this article: https://luisapiccarreta.com/more-on-st-nicholas-co-patron-of-bari-italy-along-withsan-sabino/