How did the Bishop of Myra become “Saint in Bari”?

It’s a long way from Lycia to the eastern coast of Italy. 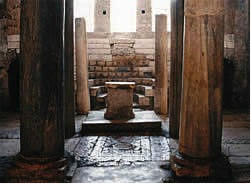 St. Nicholas’ tomb in Myra was a popular place of pilgrimage. As Myra was a seaport, sailors heard the stories of the saint’s shrine and carried them to many distant places. If a town were fortunate enough to host such a significant religious site, it enjoyed considerable commercial benefit because pilgrims needed to be housed, fed, and otherwise provided for. After Myra fell under the control of the Seljuks, who were not sympathetic to Christian faith, Italian merchants in both Venice and Bari, saw an opportunity to bring such advantage to their cities. Their motives were opportunistic, but also spiritual, as there was real fear that pilgrimage could become difficult and dangerous or that the shrine might even be desecrated.

Early in 1087, three ships with sailors and merchants from Bari stopped in Myra on their way home from Antioch. When they visited Nicholas’ tomb, the monks showed them where the manna was extracted. The sailors then asked where the saint’s body lay. The monks, perhaps naively, showed them. But the monks became suspicious and questioned the visitors about their intentions, “Surely you do not intend to take the saint’s remains to your own region? If so, we won’t allow it.” However, in the end the Barians prevailed and broke open the tomb with an iron bar. The sailors spirited the bones away to the ship, escaping just ahead of the townspeople coming in hot pursuit.

The men of Bari sailed away on the long voyage back to the southeast coast of Italy. Before getting there, they stopped at a nearby port to make a beautiful box (casket) to hold the saint’s relics. When they arrived in Bari, May 9, 1087, the townspeople thronged to the harbor to welcome the saint’s remains. The returning men made a solemn vow to build a magnificent church to honor St. Nicholas. The crypt was completed by October 1089 and Pope Urban II laid the relics of St. Nicholas beneath the crypt’s altar, consecrating a shrine that became one of medieval Europe’s great pilgrimage centers. The main church was built in ten years, but it wasn’t until the middle of the 12th century that the imposing and majestic Basilica di San Nicola was complete.

From the earliest time St. Nicholas devotees have asked for protection and health in mind and body through the use of the manna. It was diluted and made available in bottles decorated with images of the saint. Over the centuries a unique art of painting these glass bottles developed in Apulia. Every year the translation of the Nicholas relics to Bari is celebrated with a great festival which culminates in the extraction of the manna by the rector of the Basilica.

The “manna of Saint Nicholas”, which was once commonly called ‘oil’, is actually transparent pure water that is formed in the tomb of the Saint in the crypt of the Basilica in Bari. This phenomenon is not easily explainable. It is absolutely excluded that there is some kind of infiltration of water from the outside for it has been proven that the casket containing the bones of the Saint is impermeable. Notwithstanding the various solutions that are arrived at from numerous hypothesis forwarded, whether supernatural or natural explanations of the phenomenon, the manna is an authentic relic, because it is a liquid that remained in contact with the bones of the Saint, and therefore explains the very reason why there is such a great devotion springing up from this relic. The manna also exuded in the tomb of the Basilica of Myra immediately after the death of Saint Nicholas, as attested to by numerous biographies and eulogies, all are in accord of the exemplary virtue of the miracle worker.

The Legends of the translation likewise affirm that the urn containing the remains of Saint Nicholas of Myra was full of “manna”. After the translation to Bari the phenomenon continued uninterruptedly. It is also fully proven that the pilgrims coming to Bari, are attracted to the tomb of the Saint in view of the fact that the “manna” is famous because of the miracles St. Nicholas accomplishes through it. Between 1954 and 1957, the authenticity that this liquid truly came from the bones of the Saint, as was commonly held, was put into question. In 1954, because of the renovation being done in the crypt, the tomb was opened and the bones were exhumed. Then they were placed inside an urn, where it remained exposed to the public to see and venerate for three years in the hall of the treasures (of the Saint in the Basilica). Sometimes it was observed that the bones “perspired” a certain kind of fluid; one time the linen sheet which held the relics was found to be soaking wet when the mortal remains of St. Nicholas were re-interred in the tomb. This linen cloth has been preserved up to this day.

Translated from the Italian by Fr. Winston Fernandez-Cabading, OP
—from the Centro Studi Nicolaiani di Bari

Permanent link to this article: https://luisapiccarreta.com/how-did-the-bishop-of-myra-become-saint-in-bari/