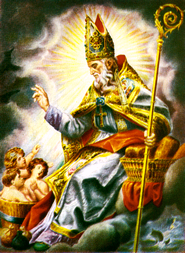 Saint Nicholas, the patron Saint of Russia, has won the warmest of praises from other Saints such as Saint John Chrysostom and Saint Peter Damian, who called him the glory of young men, the honor of the elderly, the splendor of priests and the light of Pontiffs. All the world was filled with his praises, Saint Peter added. The universal Church, in the Collect of his office, claims that God made known his nobility by an infinite number of miracles.

He was born during the third century, nephew of the Archbishop of Myra. He had lost his parents while still very young, and he desired not to conserve his rich heritage. Gradually he gave away everything of which he could dispose, establishing dowries for poor maidens and seeking out the needy wherever they could be found. The Archbishop, his uncle, already aware of his vocation to sanctity, ordained Saint Nicholas priest and appointed him Abbot of the monastery of Holy Sion near Myra. He undertook a pilgrimage to the Holy Land, resurrecting a sailor who fell from a mast during the voyage; he prayed for the frightened passengers in a near-fatal tempest and calmed it. He visited Saint Anthony of the Desert and healed many sick persons in Alexandria during a stopover in Egypt.

On the death of the Archbishop of Myra, he was elected to the vacant see. Immediately after the pontifical Mass, he resurrected an infant who had fallen into a fire.

A persecution broke out under the emperor Licinius; Saint Nicholas was banished and kept in chains. He suffered from severe mistreatment but returned to his church when Constantine the Great defeated Licinius, and in 313 then put a definitive end to the persecutions. Saint Nicholas labored in his domains to stop the worship of false gods, still practiced there as elsewhere. With his own hands he cut down a huge tree, site of a sacrilegious cult of the goddess Diana. During a famine his prayers multiplied the provisions of wheat which he had ordered for the port of Myra, to such an extent that what would have sufficed for his people for only a few days, was found to be sufficient for more than two years. He rescued from death, just before they were hanged, three innocents condemned by a judge who had been corrupted by money, reprehended the latter for his crime and sent these liberated ones home, entirely exonerated.

Throughout his life he retained the bright and simple manners of his early years; no one could converse with him without finding himself spiritually renewed. Saint Nicholas was the special protector of the innocent and the wronged. He is usually represented at the side of a container in which a cruel butcher had concealed the bodies of three young persons, whom he had killed and was intending to use in his commerce, but who were restored to life by the Saint. This miracle was reported by Saint Bonaventure in a sermon.

Saint Nicholas rejoiced when God made known to him that the end of his pilgrimage was near. He retired to his Monastery of Holy Sion, and after a short but intense episode of fever, died in the year 342. He is the patron of schoolchildren, sailors, travelers and pilgrims, prisoners and many others. His relics were translated in 1087 to Bari, Italy, where a church was built in their honor. And there, after fifteen centuries, the manna of Saint Nicholasstill flows from his bones and heals all kinds of illnesses.

Reflection: Those who would enter heaven must become like little children, whose greatest glory is their innocence. Two duties impose themselves on Christians: first, either to preserve our innocence by sage precautions or regain it by penance; secondly, to love and shield it in others.

Permanent link to this article: https://luisapiccarreta.com/st-nicholas-archbishop-of-myra-in-lycia/