OUR LADY OF AMERICA 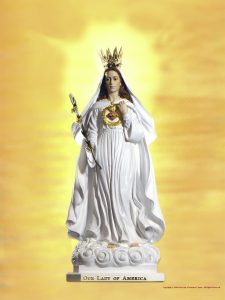 The chapel is in a huge building that once served as both a convent and healing center and it is here, in America’s heartland, in a sprawling complex, amid cornfields that are still farmed by Amish, that the apparitions now known as “Our Lady of America” first allegedly occurred [see previous stories].

This is Sylvan Springs, Indiana (right outside Rome City, about an hour northwest of Fort Wayne), and to visit it, to tour this place that had once been run by nuns known as the Order of the Precious Blood — but later fell into the hands of a cult —  is to feel a century of spiritual turbulence.

It was on September 25, 1956, as she was making her Holy Hour between 7 and 8 p.m., that a Precious Blood nun named Sister Mildred Mary Ephrem Neuzil felt a presence by her side as she was praying in the chapel and caught a glance of a white gown and blue sash. “I was under the impression that she came as Our Lady of Lourdes, and she herself confirmed this,” Sister Mildred later wrote of the Virgin (who promised that miracles even greater than those granted at Lourdes and Fatima were possible here in America and in particular the United States if it did as she desired, if it came back to purity, if it cherished its young, and if it met a special request to establish a statue of the apparition in the National Shrine of the Immaculate Conception in Washington).

Although that first announcement was more a locution than a full-scale apparition, the next day, in this same chapel — just after Mass, on the feast of the North American Martyrs — the Virgin again allegedly appeared before the end of the community’s prayers of thanksgiving. She was all in white with a lily and enveloped in a “soft glow.”

It was not the first time Sister Mildred had seen the Virgin Mary; indeed, her visions went back 18 years, and she was only here at Sylvan Springs for three months. Most of her mysticism occurred in Ohio.

But it was in this chapel that Mary announced herself as “Our Lady of America” in an apparition that received the assistance and preliminary approval of a man who would become archbishop of Cincinnati.

No one is exactly sure where the apparitions occurred. The greatest likelihood seems to be a small west wing of the chapel. All we know is that Sister Mildred was sitting in one of the standard high-backed wood pews that are still stored at the site and that in the years since the devil has done everything in his power to quash this apparition. In the 1970s the land was sold by the order to a cult called The Way. They stripped the chapel of its statues, covered the stained glass with boards, and used the domed tabernacle, now damaged, for storage.

Their ghosts still haunt the place; there is a raging spiritual war. It’s a microcosm of the world. It’s a microcosm of the U.S. Of late Larry Young, a devout and courageous Catholic businessman from Chicago, has purchased the 196-acre plot, seeking to restore the chapel, turn the rest of the 175-room building into a retreat center, as well as develop the land into a center for baseball tournaments. He has spent $300,000 of his own money on renovations so far. He hopes to draw youth and expose them to the grace of the Virgin — helped in this endeavor by an equally courageous 85-year-old priest named Father Robert J. Hoevel and small groups of rosary-praying pilgrims who pray 15 decades at the site in beautiful candlelit ceremonies. Last December 8, Mass was held here for the first time in a quarter century.

They are trying to reclaim the land and I also stood there, prayed, and threw Holy Water. I also tried to discern. Could it be possible? Is this where the United States’ first preliminarily approved apparition occurred? Would its request of instituting a statue in Washington, D.C. — turning the national shrine into a place of pilgrimage — one day occur?

And would the demons that haunt America be chased away as they are now chasing away the spirits that have afflicted this place in Indiana?

I wondered at the small arches, the nine smaller stained glass windows that are in the west wing, and at how in the midst of the apparition Sister Mildred became aware that the other sisters were leaving the chapel and that in obedience she also had to. “I said to Our Lady, `Please forgive me, Mother, but I do have to go now or my work will not be finished.’ “

The Virgin understood but when Sister Mildred returned to her room upstairs, Mary was waiting for her.

I retraced this. I took the 16 or so steps from the chapel to a back stairway that led up to what are now long lonely corridors where cell after cell served as home to sisters of the Precious Blood and where in one — no one knows exactly which — Sister Mildred again saw the Virgin with a lily as Mary watched the nun dutifully perform her chores.

On the afternoon of the same day during the last half of another Holy Hour Mary had reportedly spoken again. “My child. I entrust you with this message that you must make known to my children in America. I wish it to be the country dedicated to my purity. The wonders I will work will be the wonders of the soul. They must have faith and believe firmly in my love for them. I desire that they be the children of my Pure Heart. Let them come to me with confidence and simplicity, and I, their Mother, will teach them to become pure like to my Heart that their own hearts may be more pleasing to the Heart of my Son.”

There were other apparitions. There were other times she appeared here to Sister Mildred. At least two others occurred on October 5 and October 13. Now, they claim phenomena is occurring again. I don’t know how to discern this. I urge caution. Nothing should be done without great spiritual protection. I heard accounts of the sun spinning, of a mysterious blue butterfly, of a light that seemed to descend one night we were there and according to a teenaged woman formed into a blue light with the Virgin in it — then left like a red comet.

These reports are likely to continue. Once more, great caution must be used.

But this we know for sure: a spiritual battle rages and when that happens it’s a call to arms. We’re asked by God to take back what has been sullied by Satan. We’re asked to reclaim our chapels and churches and youth from the clutches of the evil one.

“I desire to make the whole of America my shrine by making every heart accessible to the love of my Son,” Our Lady of America had said, adding this prayer right around the time she was in Rome City: “By thy Holy and Immaculate Conception, O Mary, deliver us from evil”!

If we say that enough, the darkness will not only leave this place but the rest of our nation as well.

Permanent link to this article: https://luisapiccarreta.com/our-lady-of-america/