NATIVITY OF JOHN THE BAPTIST 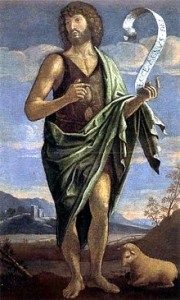 The Queen of Heaven in the Kingdom of the Divine Will

…After many days of travel, finally I arrived in Judea , and I hastened to the house of Elisabeth. She came toward Me in feast. At the greeting I gave her, marvelous phenomena occurred. My little Jesus exulted in my womb, and fixing little John in the womb of his mother with the rays of His Divinity, He sanctified him, gave him the use of reason, and made known to him that He was the Son of God. And John leaped so vigorously with love and with joy that Elisabeth was shaken. Touched by the light of the Divinity of my Son, she too recognized that I had become the Mother of God; and in the emphasis of her love, trembling with gratitude, she exclaimed: “Whence comes to me so much honor, that the Mother of my Lord would come to me?”

I did not deny the highest mystery; rather, I humbly confirmed it. Praising God with the song of the Magnificat – sublime canticle, through which the Church continuously honors Me – I announced that the Lord had done great things in Me, His servant, and that because of this, all peoples would call Me blessed….

His name is John

Jesus called John the greatest of all those who had preceded him: “I tell you, among those born of women, no one is greater than John….” But John would have agreed completely with what Jesus added: “[Y]et the least in the kingdom of God is greater than he” (Luke 7:28).

John spent his time in the desert, an ascetic. He began to announce the coming of the Kingdom, and to call everyone to a fundamental reformation of life.  His purpose was to prepare the way for Jesus. His Baptism, he said, was for repentance. But One would come who would baptize with the Holy Spirit and fire. John is not worthy even to carry his sandals. His attitude toward Jesus was: “He must increase; I must decrease” (John 3:30).

John was humbled to find among the crowd of sinners who came to be baptized the one whom he already knew to be the Messiah. “I need to be baptized by you” (Matthew 3:14b). But Jesus insisted, “Allow it now, for thus it is fitting for us to fulfill all righteousness” (Matthew 3:15b). Jesus, true and humble human as well as eternal God, was eager to do what was required of any good Jew. John thus publicly entered the community of those awaiting the Messiah. But making himself part of that community, he made it truly messianic.

The greatness of John, his pivotal place in the history of salvation, is seen in the great emphasis Luke gives to the announcement of his birth and the event itself—both made prominently parallel to the same occurrences in the life of Jesus. John attracted countless people (“all Judea”) to the banks of the Jordan , and it occurred to some people that he might be the Messiah. But he constantly deferred to Jesus, even to sending away some of his followers to become the first disciples of Jesus. He sent his disciples (when he was in prison) to ask Jesus if he was the Messiah. Jesus’ answer showed that the Messiah was to be a figure like that of the Suffering Servant in Isaiah (chapters 49 through 53). John himself would share in the pattern of messianic suffering, losing his life to the revenge of Herodias.

Permanent link to this article: https://luisapiccarreta.com/nativity-of-john-the-baptist/