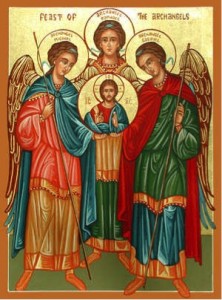 The Sacred Scriptures have revealed the proper names of only three Angels, all of whom belong to the Choir of the Archangels. The names are well known to all, namely: Michael, Gabriel, Raphael. Ancient apocryphal literature of the Old Testament contains several other names of Archangels in addition to the three just mentioned. Like the sources themselves, these other names are spurious. Names like Uriel, Raguel, Sariel, and Jeremiel are not found in the canonical books of Sacred Scripture, but in the apocryphal book of Enoch, fourth book of Esdras, and in rabbinical literature. The Church does not permit proper names of Angels that are not found in the canonical books of the Bible. All such names that were taken from apocryphal writings were rejected under Pope Zachary, in 745. There must have been danger of serious abuses in this regard during that century.

The Church honors the archangels, invokes their intercession and relies on their assistance in the spiritual warfare we daily face. In Hebrew, “Michael” means “Who is like God?” Saint Michael is mentioned four times in Scripture: Daniel 10 and 12, in Jude and in Revelation. Scripture reveals to us that Saint Michael is known as the “Prince of the Heavenly Host,” hence, the leader of all angels. It is to the Prince of the Heavenly that we owe a debt of gratitude for casting down to Hell Lucifer and the evil spirits; he is invoked for protection against Satan and all evil.

Sacred Tradition teaches that there are four offices connected to Saint Michael:

Permanent link to this article: https://luisapiccarreta.com/feast-of-the-archangels-st-michael-st-raphael-and-st-gabriel/