Feast of St. Luke The Evangelist

Feast of St. Luke the Evangelist 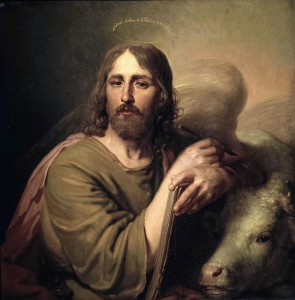 Today is the feast of St. Luke the Evangelist. It is believed that St. Luke was born a Greek and a gentile. A physician at Antioch, and a painter, St. Luke became a convert of Saint Paul and afterwards his fellow-laborer. Luke was the writer of the Gospel and its “companion volume,” the Acts of the Apostles and has been identified with St. Paul’s “Luke, the beloved physician” (Colossians 4:14). Saint Luke shared the shipwreck and perils of Saint Paul’s voyage to Rome, and was with him in his last days. He later died a martyr’s death in Achaia. After St. John, St. Luke’s writings (both his Gospel and Acts of the Apostles) are my favorite part of the New Testament. Although Luke was not an eye witness, he was a historian who carefully researched his material and obtained details from eye witnesses. As a physician, Luke emphasizes the miracles and the merciful love of Jesus, which heals his children and welcomes all into his arms — especially the sinner, the outcast, the gentile. Luke shows us the compassion of Jesus, especially toward women and children. He gives prominence not only to the group of women who follow him from the beginning of his ministry, but he also  to Mary, from the Incarnation and the infancy narratives to his mention of her being present with the Apostles at Pentecost. His is the only Gospel to give an account of the parables of the Good Samaritan and the Prodigal Son. Luke’s gospel is noted for its praise and thanksgiving and is a very poetic book. For example, Mary’s song, 1:46-55. Song of Zacharias, 1:68-79, and The Song of the Angels, 2:8-14. Finally, Luke’s is the gospel of Jesus praying, and his parables concerning prayer. 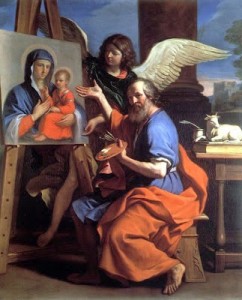 As a physician, St. Luke is the patron saint of the medical profession. He is also the patron of artists and painters, as tradition holds that he painted an icon of the Blessed Virgin Mary. St. Luke is symbolized by the ox, The ox, recognized as the animal of sacrifice, was applied to St. Luke because his Gospel emphasizes the atonement made by Christ’s sacrifice of himself on the Cross. (Fr. John Hardon’s Modern Catholic Dictionary)

PASSAGES ON THE DIVINE WILL AND THE GOSPELS

How the Virgin is isolated in Her glory, and how She awaits the cortege of the other queens, so as to have Her retinue. How the works of God hold hands among themselves.  How the manifestations on the Divine Will will be the Gospel of His Kingdom.  The issue about the writings.  Necessity of the first Priests of the Kingdom of the Fiat.

I was continuing the acts in the Divine Will, and I said to myself: “Oh! how I would like to enclose myself in the Prime Act of God, in order to do everything with one single act, so as to be able to give to my Creator all the love, all the glory, His very Beatitudes and infinite Joys, to be able to love Him and glorify Him as He glorifies and loves Himself.  What would I not give Him if I were present in that Prime Act of the Divine Fiat?  I would lack nothing to make my Creator happy with His own Happiness.”

And seeing myself impotent, I was praying my Sovereign Mama to come to my help and to enclose me with Her maternal hands in that Prime Act in which She had had Her perennial dwelling, because, since She lived in the Divine Will, the Prime Act of God was hers, and therefore She could give Him whatever She wanted. But while I was thinking about this, I said to myself: “How much nonsense I am speaking.”

But my lovable Jesus, moving in my interior, told me: “My daughter, the Queen of Heaven, in Her glory and greatness, is as though isolated.  In fact, She alone having lived in the Prime Act of God—that is, in the fullness and totality of the Divine Volition—She is the isolated Queen; She does not have the cortege of other queens who surround Her and match Her in the glory and greatness that She possesses.  She finds Herself in the conditions of a queen who is surrounded by damsels, by pageboys, by faithful friends who give Her honor and keep Her company; however, no other queen, equal to Her, gives Her the great honor of surrounding Her and of keeping Her company.

“Now, the Celestial Mama wants, desires—awaits the Kingdom of the Divine Will upon earth, in which there will be the souls who, by living in It, will form their life in the Prime Act of God, and will acquire the royalty and the right of queens. All will see, impressed in them, an indelible character that they are the daughters of the Divine King, and, as daughters, to them is due the title and the right of queens.  These souls will have their dwelling in the Divine Royal Palace, therefore they will acquire nobility of manners, of works, of steps, of words; they will possess such science, that no one will be able to equal them; they will be invested with such light, that the light itself will announce to all that here is a queen who has lived in the Royal Palace of My Will.

“And so, the Sovereign Queen will no longer be alone on Her royal throne; She will have the other queens who will surround Her; Her beauty will be reflected in them; Her glory and greatness will find the ones in whom it can pour itself. Oh! how honored and glorified She will feel.  Therefore, She desires those who want to live in the Divine Fiat, in order to Herself form the queens in the Prime Act of It, so as to be able to have, in the Celestial Fatherland, the retinue of the other queens who will surround Her and will give Her the honors due to Her.”

After this, I was thinking:  “What will be the utility of these writings on the Divine Will?”

And my highest and only Good, Jesus, moving in my interior, told me: “My daughter, all of My works hold hands, and this is the sign that they are My works—that one does not oppose the other; on the contrary, they are so bound among themselves, that they sustain one another.  This is so true that, having to form My chosen people, from which and within which the future Messiah was to be born, from that same people I formed the Priesthood, that instructed the people and prepared them for the great good of Redemption.  I gave them laws, manifestations and inspirations, upon which the Sacred Scriptures were formed, called the Bible; and all were intent on the study of It.

“Then, with My coming upon earth, I did not destroy Sacred Scriptures; on the contrary, I supported them; and My Gospel, that I announced, opposed them in nothing; on the contrary, they sustained each other in a admirable way. And in forming the new nascent Church, I formed the new Priesthood, that does not detach itself either from Sacred Scriptures or from the Gospel.  All are intent upon them in order to instruct the peoples; and it can be said that anyone who did not want to draw from this salutary fount does not belong to Me, because these are the basis of My Church and the very life with which the peoples are formed.

“Now, what I manifest on My Divine Will, and that you write, can be called ‘The Gospel of the Kingdom of the Divine Will.’ In nothing does It oppose either Sacred Scriptures or the Gospel that I announced while being on earth; on the contrary, It can be called the support of one and of the other.  And this is why I allow and I call Priests to come—to read the Gospel, all of Heaven, of the Kingdom of My Divine Fiat, so as to say, as I said to the Apostles:  ‘Preach It throughout the whole world.’  In fact, in My works I make use of the Priesthood; and just as I had the Priesthood before My coming in order to prepare the people, and the Priesthood of My Church in order to confirm My coming and everything I did and said, so will I have the Priesthood of the Kingdom of My Will.

“Here is the utility of the many things I have manifested to you, the many surprising truths, the promises of the so many goods that I must give to the children of the Fiat Voluntas Tua:  they will be the Gospel, the basis, the inexhaustible fount from which all will draw the Celestial life, the terrestrial happiness and the restoration of their Creation.  Oh! how happy they will feel—those who, with yearning, will drink in large gulps from these founts of My knowledges; because they contain the virtue of bringing the life of Heaven, and of banishing any unhappiness.”

Then, in hearing this, I was thinking to myself about the big issue concerning the writings on the Divine Will, that are in Messina, brought there by the blessed memory of venerable Father Di Francia: how myself and my other superiors absolutely want them here, while the superiors in Messina, rigorously recommended by the venerable Father before dying, want to keep them over there, for their publication when God pleases.  So, we do nothing but [send] letters of fire, back and forth—them, to keep them, and us, to get them back.

And I was feeling all worried, bored and tired, and was saying to myself: “How could Good Jesus allow all this?  Who knows whether He too feels disappointed?”

And He, moving in my interior, told me: “My daughter, you are worried, but I am not disappointed at all; on the contrary I enjoy in seeing the interest that Priests take in these Writings that will form the Kingdom of My Will.  This means that they appreciate the great good of them, and each one would want to keep such a great treasure with himself, to be the first to communicate it to others.  And while the issue of who is going to win lasts, one approaches the other in order to consult one another on what to do.  And I enjoy that more of My Ministers get to know that there is this treasure so great, of making known the Kingdom of My Divine Will; and I use this to form the first Priests of My coming Kingdom of My Fiat.

“My daughter, it is a great necessity to form the first Priests; they will serve Me like the Apostles served Me to form My Church; and the ones who will occupy themselves with these Writings in order to publish them, putting them out to print them—to make them known, will be the new evangelists of the Kingdom of My Supreme Will. And just as the ones who are most mentioned in My Gospel are the four Evangelists who wrote It, to their highest honor and My Glory, so it will be for those who will occupy themselves with writing the knowledges on My Will in order to publish them.  Like new evangelists, there will be greater mention of them in the Kingdom of My Will, to their highest honor and My great Glory in seeing the order of the creature, the life of Heaven on earth—the only purpose of Creation—return into My bosom.

“Therefore, in these circumstances I expand the circle, and, like a fisherman, I catch those who must serve Me for a Kingdom so holy. Therefore, let Me do, and do not be worried.”

Permanent link to this article: https://luisapiccarreta.com/feast-of-st-luke-the-evangelist-2/