9/8 FEAST OF THE BIRTH OF THE BLESSED VIRGIN MARY 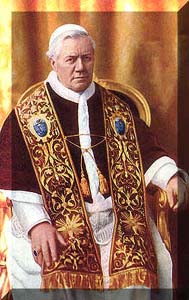 Motto “renew all things in Christ”

An 11 year period where Luisa “The Divine Mirror” completed the very important book “The Hours of the Passion”, which was soon followed by WWI.

“Several witnesses relate that one day Father Annibale came to the house of Luisa more content than ever, and said that he had brought this book to the Holy Father, Saint Pious X, who had received him several times in private audience.

Father Annibale was reading him one of the Hours (that of the Crucifixion), when the Pope interrupted, saying:

“Not this way, Father, but kneeling one must read. It is Jesus Christ that is speaking.”

Finally, Father Annibale, as Censor of the writings, obtained the Imprimatur from His Excellency the Archbishop of Trani for the volumes written by Luisa (at that time there were already nineteen)

Book of Heaven – Volume 7 – October 13 A.D. 1906 Detachment. Necessity of these writings, which are a Divine Mirror.

As I was in my usual state, my good Jesus made Himself seen for a little while, and He told me: “My daughter, in order to know whether a soul is stripped of everything, it is enough to see this: if holy or even indifferent desires arise within her and she is ready to sacrifice them to the Divine Volition with holy peace, it means that she is stripped; but if she becomes disturbed and upset, it means that she is keeping something for herself.”

Hearing the word “desire”, I said: ‘My highest Good, my desire is that I would rather not write any more. How it weighs on me – if it wasn’t for fear of going out of your Will and of displeasing You, I would not do it.’ And He, breaking my words off, added: “You do not want it, and I want it. That which I say to you, and which you write out of obedience, for now, serves as a mirror for you and for those who take part in directing you; but the time will come when it will serve as a mirror for others. So, that which you write, spoken by Me, can be called ‘Divine Mirror’. And you would want to take this Divine Mirror away from my creatures? Watch it, seriously, my daughter, and do not want to restrict this Mirror of Grace by not writing everything.” On hearing this, I remained confused and humiliated, with a great repugnance to write these last words of His, but obedience absolutely imposed it on me, and only to obey, I wrote. Deo Gratias.

Permanent link to this article: https://luisapiccarreta.com/feast-of-saint-pope-pius-x/