9/19 TODAY IS THE START OF THE NOVENA TO ST. MICHAEL

9/23 TODAY IS THE FEAST DAY OF ST. PADRE PIO OF PIETRELCINA 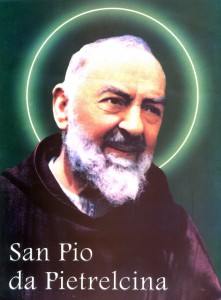 Pio (Francesco Forgione) was born to Mamma Peppa and Grazio Forgione in the little town called Pietrelcina, in Southern Italy, during the month of flowers, May 25th 1887. He was fifth of eight children. His Mamma Peppa confided he was different from other boys: “he was never impolite or misbehaved”. He had celestial visions and diabolical oppressions from the age of five years and he saw and spoke with Jesus and Our Lady and with his Guardian Angel, but unfortunately this heavenly life was interwoven with hell and with the devil.

In 1903, Discipline and ill health had been woven together to crown the youth of Pio. Doctors diagnosed him as consumptive and were sure he would die. Strong in spirit Pio received the Capuchin Franciscan garb initialling religious life and therefore; Noviciate with its intense study, prayer, austerity, penance and finally vows of Poverty, Chastity and Obedience.

In 1909, we find him at Pietrelcina because of his illness, at his mother’s side. Now another intense chapter of extraordinary life opens with mystical afflictions an invisible stigmata and terrible battles with devils that wanted to destroy him began. Yet, “It all happened here”, he said, his whole future was prepared here. On August 10, 1910, he was ordained a Priest in the Cathedral of Benevento.

In 1916, we find him in the church of San Giovanni Rotondo, soon to become his Jerusalem, with the mystical and historical calvary of Gargano, where he was soon recognised as the “saintly friar” by the locals. Here he became a “victim of love”, by the reparation for sin, propitiator and regenerator of the many crowds who flocked to him, to venerate his bleeding wounds of his hands and feet. This very important event occurred in Father Pio’s life on September 20, 1918, while he was praying in front of a Crucifix located in the choir in the little old church, when a strange personage like an angel, gave him the stigmata. Those stigmata have been remained opened and bleeding for fifty years. This was one of the reasons for which doctors, scientists, journalists and common people have gone to San Giovanni Rotondo for years, in order to meet the “Saintly friar “.

In a letter dated October 22, 1918, Padre Pio told his experience of crucifixion: “… What I can tell you about my crucifixion? My God! What a confusion and what humiliation I feel when I try to show somebody else what you have done in me your scanty creature! It was the morning of the 20th. (September) and I was in choir, after the celebration of the Holy Mass, when a rest, similar to a sweet sleep surprised me. All the inside and external senses, as well as the same faculties of the soul were in an indescribable quiet. There was a depth silence around me and inside me; a peace overcame me and then it all happened in a flash I felt abandonment with the complete deprivation of everything. While all this was taking place, I saw before me a mysterious appearance, similar to the one I had seen on August 5th, differing only because His hands, feet and side were dripping blood. The sight of Him frightened me: what I felt at that moment is indescribable. I thought I would die, and would have died if the Lord hadn’t intervened and strengthened my heart, which was about to burst out of my chest!     The appearance disappeared and I became aware that my hands, feet and side were pierced and were dripping with blood”. You can imagine the torment that I experienced then and that I am almost experiencing every day. The wound of the heart assiduously bleeds, particularly from the evening of Thursday until Saturday. My God, I die of pain, torment and confusion that I feel in the intimate of the soul. I am afraid I’ll bleed to death!     I hope that God listens to my moans and withdrawals this operation from me… “

He usually woke up in the early morning (we could say at night) in order to get himself ready for the Holy Mass. In fact, every morning, at 4 a.m. there were always hundreds and sometimes even a thousand people waiting for the door of the church to open. After the Mass he used to spend most time of his day in prayer and confessions. After fifty years of stigmata he died September 23, 1968, thus he closed his mission of the Heart’s desire, with the real cross and the real crucifixion of his body.

Then, for years, from every part of the world, the believers went to this stigmatised priest, to get his powerful intercession from God. Fifty years lived in the prayer, in the humility, in the suffering and in the sacrifice, whether to effect his love, Padre Pio had two initiatives in two directions: the vertical one toward God, with the constitution of the “Groups of prayer”, the horizontal one toward his suffering community, with the construction of a modern hospital: “House Relief of the Suffering.”

In September 1968, thousands of devotees and Padre Pio’s spiritual children were assembled in conference at St. Giovanni Rotondo to commemorate together the 50 anniversary of the stigmata and to celebrate the fourth international conference of the Prayer Groups. Nobody would have imagined that at 2:30 a.m., September 23, 1968 we the earthly life of Father Pio of Pietrelcina would end.

an excerpt from the book

LUISA PICCARRETA  collection of memories of the Servant of God

Luisa Piccarreta and Blessed Padre Pio of Pietrelcina knew one another for some time without ever having met, for Luisa was always confined to the bed where she sat, while Padre Pio was enclosed in the friary of the Capuchin Fathers of San Giovanni Rotondo.5

One question naturally arises, how did they come to know one another?

This is difficult to discover, yet one thing is certain, that the two did know and esteem one another.

My aunt recounts how Luisa would speak with respect and veneration of the blessed father, describing him as a “true man of God“, who still had great suffering to face for the good of souls.

In about 1930, a well-known figure arrived at Luisa’s house, sent personally by Padre Pio. He was Federico Abresch, a convert of Padre Pio. Federico spoke at length with Luisa. What they said we are not given to know; but one thing is certain. Federico Abresch became an apostle of the Divine Will and regularly visited Luisa, with whom he always had long conversations.

When his little son received his first communion from Padre Pio’s hands, he was also immediately taken to see Luisa who, according to the story, foretold that he would become a priest.

The small boy of that time is now a priest and works at the Congregation for Bishops in Rome; he is known by the name of Mgr. Pio Abresch.

When Luisa was condemned by the Holy Office and her works put on the Index, Padre Pio sent her this message though Federico Abresch: “Dear Luisa, saints serve for the good of souls, but their suffering knows no bounds“. At that time Padre Pio was also in very great difficulties.

Blessed Padre Pio sent many people to Luisa Piccarreta and would say to the people of Corato who went to San Giovanni Rotondo: “What have you come here for? You have Luisa, go to her“.

Padre Pio recommended to certain of his faithful (including Federico Abresch) that they open a spirituality center at San Giovanni Rotondo, inspired by the Servant of God Luisa Piccarreta.

Miss Adriana Pallotti (a spiritual daughter of Padre Pio) is currently an heir to Padre Pio’s wishes. She has opened a House of the Divine Will at San Giovanni Rotondo, keeping alive the torch lit by Padre Pio with Federico Abresch. Miss Adriana Pallotti says that it was Blessed Padre Pio who encouraged her to spread Luisa Piccarreta’s spirituality in San Giovanni Rotondo and to help disseminate the Divine Will throughout the world, as Padre Pio desired.

Aunt Rosaria went regularly to San Giovanni Rotondo, especially after Luisa’s death. Padre Pio knew her very well, and when Luisa was still alive he would ask Aunt Rosaria when he saw her: “Rosa’, how is Luisa?“.

Aunt Rosaria would answer him: “She is well!“.

After Luisa’s death, Aunt Rosaria increased her visits to San Giovanni Rotondo, in order to receive enlightenment and advice from Padre Pio.

Aunt Rosaria was the one lamp that stayed alight to resolve Luisa Piccarreta’s case regarding the sentence of the Holy Office, visiting various ecclesiastical figures and, in addition, confronting the Congregation of the Holy Office. Once she managed – it is not known how – to enter the office of the Cardinal Prefect, Ottaviani, who heard her kindly and promised to take up the case.

Indeed, a few days later, Aunt Rosaria was summoned by Archbishop Addazi of Trani, who said to her: “Miss Rosaria, I do not know whether to reprimand you or to admire you for your courage. You have faced the guard dog of the Church, the great defender of the faith, without being bitten“.

The conclusion was that permission was obtained to move Luisa’s body from the cemetery to the Church of Santa Maria Greca.

Luisa said to my aunt: “You will be my witness” and one day Padre Pio told her point-blank in his Benevento dialect: “Rosa’, va nanz, va nanz ca Luisa iè gran e u munn sarà chin di Luisa” (Rosaria, go ahead, go ahead for Luisa is great and the world will be full of Luisa). My aunt often recounted this episode, but things were not going well: everything indicated that Luisa would soon be forgotten.

After the venerated Padre Pio’s death, my aunt said one day: “Padre Pio prophesied that Luisa would be known throughout the world“. And she repeated the phrase Padre Pio had said in his dialect.

I answered that there would be no easy solution to the case of Luisa Piccarreta Indeed nothing further was said of it in Corato either, and Padre Pio’s words could have been considered merely a comforting remark. But Aunt Rosaria retorted: “No! During my confession Padre Pio told me that Luisa is not a human factor, she is a work of God and he himself will make her emerge. The world will be astounded at her greatness; not many years will pass before this happens. The new millennium will see Luisa’s light“.

I was silent at this assertion and my aunt asked me: “But do you believe in Luisa?“.

I answered her that I did.

Then she said to me: “Come to my house in a few days’ time, because I have something very important to tell you“.

It was during the 70s and Padre Pio had been dead for a several years.

Permanent link to this article: https://luisapiccarreta.com/923-today-is-the-feast-day-of-st-padre-pio-of-pietrelcina/