9/8 TODAY, SEPTEMBER 8, IS THE FEAST OF THE NATIVITY OF THE BLESSED VIRGIN MARY

9/12 FEAST OF THE MOST HOLY NAME OF MARY 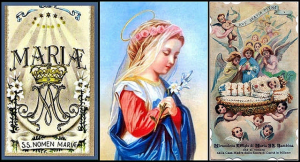 The feast of the Most Holy Name of the Blessed Virgin Mary originated in Spain and was approved in 1513. In 1683, Pope Innocent XI extended the celebration of the feast day to the universal Church, to be celebrated on September 12th, four days after the Feast of the Birth of the Blessed Mother. With the revisions of the Roman Missal in 1970 following the Vatican Council II, the feast day was removed from the universal calendar, although the Votive Mass remained. However, Pope John Paul II in the third edition of the Roman Missal, issued in 2003, reinstituted the feast day, technically as an “optional memorial.”

The name Mary is rooted in various ancient languages: in Hebrew Myriam; in Aramaic Maryam; in the Greek Old Testament, Mariam; and in Greek and Latin New Testament, Maria. Modern philological studies of ancient Egyptian suggest that Mary means “lady, beautiful one, or wellbeloved.”

Some scholars of Ugaritic texts (ancient Syrian) suggest the name mrym derives from the verb rwn, thereby rendering the meaning of “high, lofy, exalted, or august.” These root meanings fit well with the message of the Archangel Gabriel: “Hail, Mary, full of grace [or Rejoice, O highly favored daughter]! The Lord is with you. Blessed are you among women” (Luke 1:28).

Of course, the name “Mary,” being the name of the Blessed Mother, deserves special respect and devotion, and is thereby celebrated in four ways: First, Mary is a name of honor, since the faithful praise Mary as the Mother of our Divine Savior; she is rightfully called “Mother of God,” for Jesus true God, second person of the Holy Trinity entered this world becoming also true man through Mary who had conceived by the power of the Holy Spirit. Second, Mary is a most holy name, because the very mention of her name reminds us she is full of grace, has found favor with God, and is blessed among all women. Third, Mary is a maternal name, because she is our Mother, whom our Lord gave to us a He was dying on the cross (cf. John19:26-27). Finally, Mary is a name of the mother who responds to all of our needs, protects us from evil, and prays “for us sinners now and at the hour of our death.”

The holy name of Mary has been revered in many ways. St. Louis de Montfort (d. 1716) said, “The whole world is filled with her glory, and this is especially true of Christian peoples, who have chosen her as guardian and protectress of kingdoms, provinces, dioceses, and towns. Many cathedrals are consecrated to God in her name. There is no church without an altar dedicated to her, no country or region without at least one of her miraculous images where all kinds of afflictions are cured and all sorts of benefits received. Many are the confraternities and associations honoring her as patron; many are the orders under her name and protection; many are the members of sodalities and religious of all congregations who voice her praises and make known her compassion. There is not a child who does not praise her by lisping a ‘Hail Mary.’ There is scarcely a sinner, however hardened, who does not possess some spark of confidence in her. The very devils in hell, while fearing her, show her respect.”

Finally, the feast date of September 12th also has special significance. In 1683, the Moslem Turks, under the leadership of Sultan Mohammed IV, once again began their aggression against Christian Europe. Just a few years earlier, they had been stopped at Poland. A huge army of Muslim Turks, estimated at around 300,000, marched through Hungary (parts of which had been under their control for 150 years) towards Austria. They ravaged Hungary, and were partly successful because of a Calvinist named Thokoly who incited rebellion against the Catholic rulers; for his traitorous dealings, Mohammed IV named Thokoly “King of Hungary and Croatia,” but with the understanding that he was simply a vassal to his Moslem overlord.

The Moslem aggression continued on to Austria. Emperor Leopold fled from Vienna. By July, 1683, the Grand Vizier Kara Mustapha laid siege to Vienna, defended by an army of only 15,000 Christians. The papal nuncio as well as Emperor Leopold begged King Jan Sobieski, who had defeated the Moslem Turks at the Polish borders and had earned the title “Unvanquished Northern Lion,” to come to their aid. Sobieski did not hesitate.

In August, Sobieski began his campaign. As he and his troops passed the Shrine to Our Lady of Czestochowa, they begged the Blessed Mother’s blessing and intercession. At the beginning of September, they crossed the Danube and met with the German armies. On September 11, Sobieski was outside of Vienna with an army of about 76,000 men. The hussars lured the Moslem Turks into thinking they were on retreat, and then with reinforcements attacked. The Moslem Turks retreated, but were followed by Sobieski’s calvary. The  vanquished Moslem Turks fled Austria (but only after slaughtering hundreds of hostages). Vienna and Christian Europe were saved. The Moslem standard proclaiming “Death to the Infidel” was taken by Sobieski and delivered to the Pope.

Worshiping at a Holy Mass of Thanksgiving, Sobieski fell prostrate and with outstretched arms declared it was God’s cause and praised Him for the victory saying, “Veni, vidi, Deus vicit.” meaning “I came, I saw, God conquered,” which he also wrote in a letter to Pope Innocent XI. On September 12th, Sobieski triumphantly entered Vienna. Pope Innocent XI thereupon declared September 12th as a date to honor Mary, whose maternal intercession had saved Christendom just has it had over 100 years earlier at the Battle of Lepanto. As for Kara Mustapha, Mohammed IV had him strangled for being defeated by the Christians. Pause for a moment: Only the ignorant would not see the connection between September 11, 1683 and the terrorist attacks of September 11, 2001.

As we celebrate this feast day, let us remember the opening prayer for the Mass: “Lord, our God, when your Son was dying on the altar of the cross, He gave us as our mother the one He had chosen to be His own mother, the Blessed Virgin Mary; grant that we who call upon the holy name of Mary, our mother, with confidence in her protection may receive strength and comfort in all our needs.” May our Blessed Mother continue to protect us, especially those Christians suffering under Islamic persecution this very day.

Permanent link to this article: https://luisapiccarreta.com/9-12-feast-of-the-most-holy-name-of-mary/