4/5 – A Very Blessed and Holy Easter in the Most Holy Divine Will!

4/6 Monday within the Octave of Easter

4/6 Monday within the Octave of Easter

The Octave of Easter, during which formerly no servile work was done, was one continual Feast.  Each day the neophytes (those novices in the Catholic Faith who were fully accepted into the Church during the Easter Service) attended Mass at a Station (a specifically designated Church), at which they received Holy Communion.  In the evening they went to St. John Lateran for the office of Vespers (Evening Prayer of the Church). 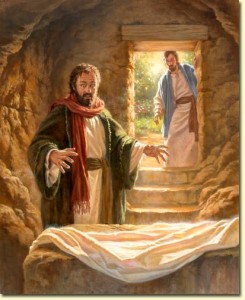 Sts. Peter (foreground) and John
at the Empty Tomb of Our Lord Jesus Christ

On the first day of the week the Station was at St. Peter’s, which contains the tomb of the head of the Church.  We hear St. Peter’s voice in the first reading (Acts 2:14-14,22-32).  He proclaims to the world the Resurrection of Christ, of which he was witness.

Now, listen to Me, daughter of My Sorrows: as My Dear Son Breathed His last, He descended into Limbo, as Triumpher and Bearer of Glory and Happiness to that prison in which were all the Patriarchs and Prophets, the first father Adam, dear Saint Joseph, My holy parents, and all those who had been saved by virtue of the foreseen Merits of the future Redeemer. I was Inseparable from My Son, and not even death could take Him away from Me. So, in the Ardor of My Sorrows I followed Him into Limbo and was Spectator of the Feast, of the Thanksgivings, which that whole great crowd of people gave to My Son, who had suffered so much, and whose first step had been toward them, to Beatify them and to bring them with Himself to Celestial Glory. So, as He died, Conquests and Glory began for Jesus and for all those who loved Him. This, dear daughter, is symbol of how, as the creature makes her will die through Union with the Divine Will, Conquests of Divine Order, Glory and Joy begin, even in the midst of the greatest sorrows. Even though the eyes of My Soul followed My Son and I never lost sight of Him, at the same time, during those three days in which He was buried, I felt such Yearnings to see Him Risen, that in My Ardor of Love I kept repeating: “Rise, My Glory! Rise, My Life!” My Desires were Ardent, My Sighs, of Fire—to the point of feeling consumed.

Now, in these yearnings, I saw that My Dear Son, accompanied by that great crowd of people, went out of Limbo in Act of Triumph, and brought Himself to the sepulcher. It was the dawn of the third day, and just as all nature had cried over Him, now it rejoiced; so much so, that the sun anticipated its course to be present at the Act in which My Son was Rising Again. But—O marvel—before Rising Again, He showed that crowd of people His Most Holy Humanity— Bleeding, Wounded, Disfigured; the way it had been reduced for Love of them and of all. All were moved, and admired the Excesses of Love and the Great Portent of Redemption.

Now, My daughter, O, how I wish you to be present in the Act in which My Son Rose Again. He was all Majesty; His Divinity, United to His Soul, unleashed Seas of Light and of Enchanting Beauty, such as to Fill Heaven and earth; and, as Triumpher, making use of His Power, He Commanded His dead Humanity to receive His Soul again, and to Rise, Triumphant and Glorious, to Immortal Life. What a Solemn Act! My Dear Jesus Triumphed over death, saying: “Death, you will no longer be death—but Life.”

With this Act of Triumph, He placed the Seal that He was Man and God; and with His Resurrection, He confirmed His Doctrine, His Miracles, the Life of the Sacraments, and the whole Life of the Church. Not only this, but He obtained Triumph over the human wills, weakened and almost extinguished to True Good, to make Triumph over them the Life of that Divine Will which was to bring to creatures the Fullness of Sanctity and of all Goods. And at the same time, by virtue of His Resurrection, He cast into the bodies the Seed of Resurrection to Everlasting Glory. My daughter, the Resurrection of My Son encloses everything, says everything, confirms everything, and is the Most Solemn Act that He did for Love of creatures.

Permanent link to this article: https://luisapiccarreta.com/46-monday-within-the-octave-of-easter/