manifestation of an absent God or complete revelation of His love. 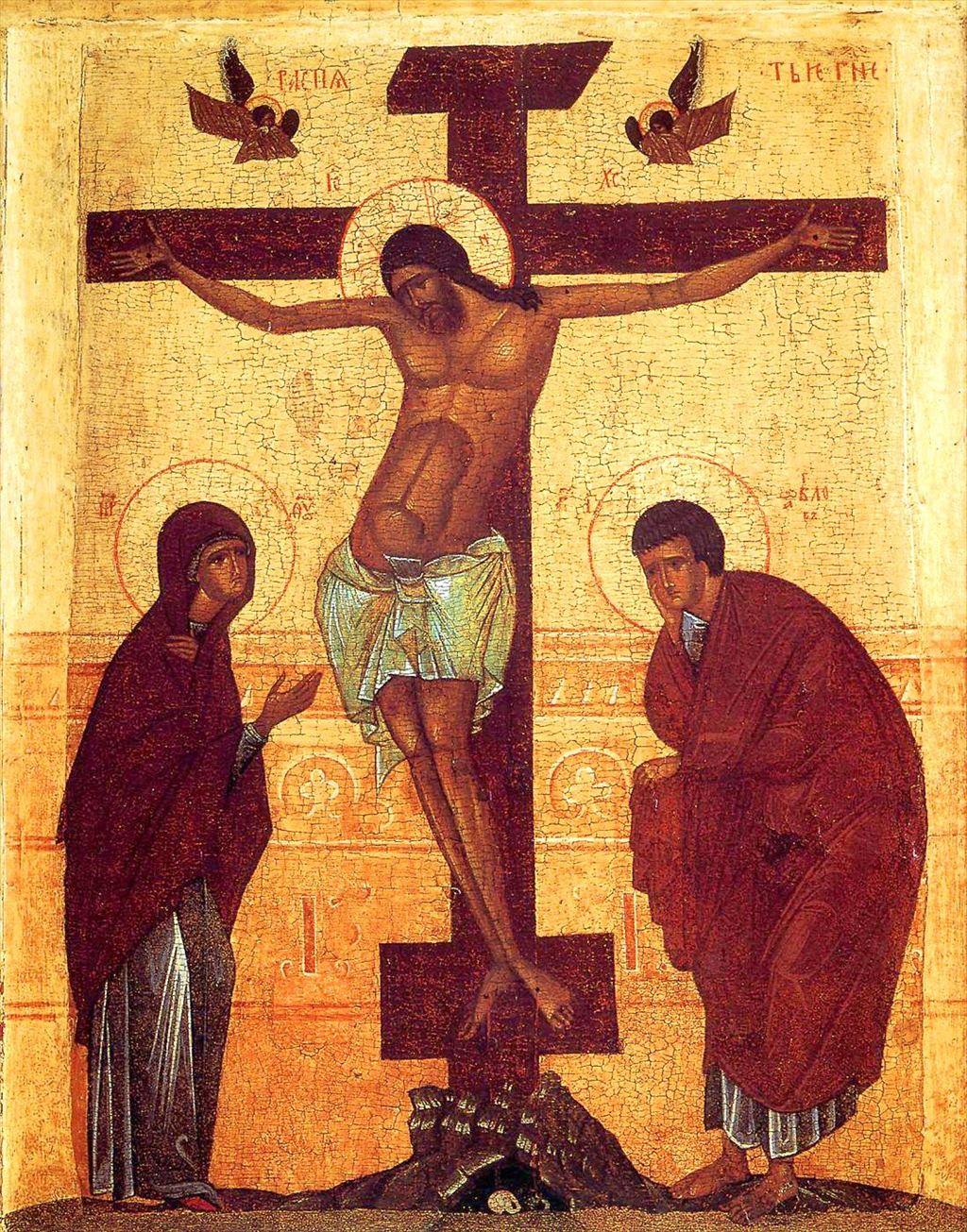 It’s Easter time,  a time of complete joy for the triumph of the Risen Christ. In Him each of us has risen to a new life and is committed to keep the values of Faith and Peace alive. This is a time of continuous celebration and will receive its completion, its fullness at Pentecost.

But once again we want to focus our attention on the moment preceding this time, the most delicate and touching of the whole Passion of Jesus: His death on the cross. This moment is solemn: either Christ’s death or the death of all creatures must be decided. There, on the Cross, where He defeated sin and divinized death.

“For God so loved the world, that he gave his only Son, that whoever believes in him should not perish but have eternal life” (John 3:16).

This statement would be enough to understand God’s love for his creatures and the purpose towards which He directs them: salvation!

For an excess of love God created the world and in it He wanted free creatures with whom to exchange the same love that circulates in the Holy Trinity.

It’s this freedom that creates the distance between God and the creature, because this one chooses to move away, and believes that she is capable of managing her life and often also that of others.

In all this, the love of God/Father toward his creatures/children doesn’t waver, but it is simply shown through a new and deeper aspect: mercy.

Now his love is a suffering love because it is unrequited, but it never stops. It is continuous and constant even when God seems to be silent, when He seems to be completely absent and indifferent to the sufferings of the world and of innocents in particular. It seems that He did so also with His beloved Son who on the cross cried out: “My God, my God, why have you forsaken me?”.

It is here, in regard to the theme absence of God, that the great philosophers and thinkers turn on: Aristotle’s concept of the unmoved mover/indifferent God; Nietzsche’s announcement of the death of God; Schopenhauer who sees too much evil in the world and, for this reason, it is impossible that there might be a Being, full of Love as described in revelations; and then there are the common people always ready to ask themselves what is to be done or no with God: if God is good, but not omnipotent, as He doesn’t intervene in favor of the honest person or if He is omnipotent, but not good, as He allows the wicked and unrighteous to act freely.

The truth is that men have still  a “distorted image of God….. He is seen as the Supreme Being, as an entity who asserts himself over an individual from the outside… God is the one who intervenes with divine punishment to reestablish the moral order” ( Father Raniero Cantalamessa, March 25, 2016)  but He is indifferent to the joys and pains of the creatures.

It is also true that man doesn’t  know and doesn’t try to know God.  Sacred Scripture in the Old Testament tells us that God is a merciful God who feels compassion for human misery (Exodus, 34.6), He lets himself be moved by suffering and participates in the joy of man. Jesus Himself, in His humanity, lived with man his feelings: joy, but also anger, sadness, anxiety and fear, and He divinized them. The cry of Jesus on the cross is a demonstration that He took upon himself the human condition into which He entered to become a sinner and be in solidarity with him. The novelty is that with Him everything is mixed with love, an exaggerated and immeasurable love.

In the face of evil Jesus loves!  On the contrary, in the face of evil man seeks revenge, and not justice, much less divine justice and mercy, which instead are revealed precisely on the Cross. Therefore it remains inconceivable to the human mind to see reflected in the cruel Passion and Crucifixion of Jesus, God’s justice and love, his mercy in favor of all his creatures.

Yet one wonders: how else could God bring his lost sheep to the fold except through a good shepherd who is ready to take care of each one up to the sacrifice of Himself?

And who could have carried out this delicate and difficult mission, but the One who is in close communion with God? If not a Son who knows the Father’s intentions and works with His own Will?

In his homily on Good Friday, Don Sergio focused on this aspect, that is certainly not easy to understand: the passion and crucifixion of Christ are the extreme manifestation of God’s love for all creatures. He sacrificed his innocent Son to save all of us, incorrigible sinners.  It’s his own Will that wants to sacrifice on the Cross the lamb without blemish, and without spot, who is loaded with all our sins. And this is the meeting of two wills: that of the Father and of the Son who wants to give Himself as a voluntary victim to save the world!

God is love and mercy to such an extent that He took the place of the sinner in His Son Jesus, He died in his place so that he might live: “… unless a grain of wheat fall into the ground and die, it abideth alone; but if it die, it bringeth forth much fruit.. .”(John. 12:24).

This is the law of love: give yourself to others and this is the law of Christ: bear one another’s burdens (Gal 6:2). To suffer for love, to save the neighbor from an imminent danger: from certain death.

Luisa, by God’s will, was called to insert herself in this context in order to continue, in Jesus’ Humanity, to make reparation for sinners and lead them to safety.

Luisa didn’t refuse, but  she accepted  and offered herself  because she loved, she loved Christ and in Him all creatures.

Therefore love will save the world, because “Love bears all things, believes all things, hopes all things, endures all things.” (I Cor 13:7). Christ’s death on the cross on Good Friday is the worst thing that has ever happened, but life did not stop on the cross, rather from there it has started again with a new beginning.

Pope Francis exhorts us to not lose hope: the one who loves hopes and knows that  our merciful God is always there, waiting for each of us. His love chases and reaches us, right there on our cross.

Permanent link to this article: https://luisapiccarreta.com/413-the-cross/