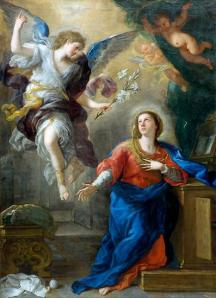 Luisa Piccarreta the Little Daughter of the Divine Will:

“With a Novena of Holy Christmas, at the age of about seventeen, I prepared myself for the Feast of Holy Christmas, by practicing various acts of virtue and mortification; and, especially, by honoring the nine months which Jesus spent in the maternal womb with nine hours of meditation each day, always concerning the mystery of the Incarnation.”

Some Jewish scholars had calculated that the date of Creation was March 25, and it made sense to believe that, since a new creation began upon the Incarnation, Jesus was conceived on the same day as the first creation.

St. John the Baptist’s Beheading was March 25th, precisely one year prior to Jesus’ Death

Herod’s Birthday was also March 25th, and St. John the Baptist was beheaded during his party

The opinion that the Incarnation also took place on March 25th is found in the pseudo-Cyprianic work “De Pascha Computus”, c. 240.

The ancient martyrologies assign to the 25th of March to the fall of Lucifer like lightning, and…

… the passing of Israel through the Red Sea  and also…

…and the immolation/ sacrifice of Isaac by his father Abraham.

St Patrick arrived in Ireland on March 25, 433, at Slane. One legend says that he met a chieftain of one of the tribes, who tried to kill Patrick. Patrick converted Dichu (the chieftain) after he was unable to move his arm until he became friendly to Patrick.

Under charter granted to Lord Baltimore and led by his brother Leonard Calvert the first settlers to the new world found the Catholic colony of Maryland on March 25th 1634 ~!

March 25th was made a legal holiday in Maryland

The Annunciation to Mary by the angel Gabriel that she was to be the Mother of God (Luke, 1), the Word being made fiesh through the power of the Holy Spirit. The feast of the Annunciation, called also in old calendars the feast of the Incarnation, is celebrated 25 March. It probably originated about the time of the Council of Ephesus, c.431, and is first mentioned in the Sacramentary of Pope Gelasius (died 496).

“Astonishingly, the starting point for dating the birth of Christ was March 25. As far as I know, the most ancient reference to it is in the writings of the African ecclesiastical author Tertullian (c. 150-c. 207), who evidently assumes as a well-known tradition that Christ suffered death on March 25. In Gaul, right up to the sixth century, this was kept as the immovable date of Easter. In a work on the calculation of the date of Easter, written in A.D. 243, and also emanating from Africa, we find March 25 interpreted as the day of the world’s creation, and, in connection with that, we find a very peculiar dating for the birth of Christ. According to the account of creation in Genesis 1, the sun was created on the fourth day, that is, on March 28. This day should, therefore, be regarded as the day of Christ’s birth, as the rising of the true sun of history. This idea was altered during the third century, so that the day of Christ’s Passion and the day of his conception were regarded as identical. On March 25 the Church honored both the Annunciation by the angel and the Lord’s conception by the Holy Spirit in the womb of the Virgin. The feast of Christ’s birth on December 25—nine months after March 25—developed in the West in the course of the third century, while the East—probably because of a difference of calendar—at first celebrated January 6 as the birthday of Christ. It may also have been the response to a feast of the birth of the mythical gods observed on this day in Alexandria. The claim used to be made that December 25 developed in opposition to the Mithras myth, or as a Christian response to the cult of the unconquered sun promoted by Roman emperors in the third century in their efforts to establish a new imperial religion. However, these old theories can no longer be sustained. The decisive factor was the connection of creation and Cross, of creation and Christ’s conception.” -Ratzinger, Joseph Cardinal; Pope Emeritus Benedict XVI; The Spirit of the Liturgy (pp. 105-107)

Permanent link to this article: https://luisapiccarreta.com/325-nine-months-until-christmas/