3/14 Fifty-third Anniversary of the Ordination of Fr. Bernardino Bucci

3/15 Genesis 3:15 “I will put enmities between thee and the woman, and thy seed and her seed: she shall crush thy head, and thou shalt lie in wait for her heel.” 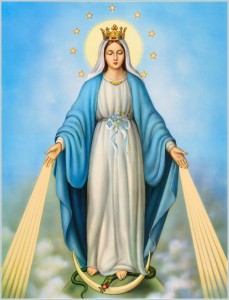 I was continuing my acts in the Divine Volition, and uniting myself to the acts that It did in Creation, in order to give It the homage, the love, the adoration for each thing created for love of creatures.  My poor mind brought itself into Eden, in the act of the fall of man, as the infernal serpent, with his cunning and lie, induced Eve to withdraw from the Will of her Creator; and Eve, with her enticing manners, induced Adam to fall into the same sin.

Now, while I was thinking about this, my beloved Jesus told me:  “My daughter, My Love was not extinguished because of the fall of man, but became more ignited; and even though My Justice justly punished him and condemned him, My Love, kissing My Justice, without delay promised the future Redeemer, and said to the deceitful serpent, with the empire of My Power:  ‘You have made use of a woman to snatch man from My Divine Will, and I, by means of another woman, who will have in Her power the Power of My Fiat, will knock down your pride, and with Her immaculate foot, She will crush your head.’  These words burned the infernal serpent more than hell itself, and he stored so much rage in his heart, that he could no longer stay still—he would do nothing but go round and round the earth, to discover She who was to crush his head—not in order to let it be crushed, but so as to be able, with his infernal arts, with his diabolical tricks, to make fall She who was to defeat him, debilitate him, and bind him in the dark abysses.  So, for four thousand years he kept always wandering; and when he would see women who were more virtuous and good, he would arm his battle, he would tempt them in every way, and only then would he leave them, when he would be assured, by means of some weakness or defects, that they were not She through whom he was to be defeated.  And he would continue his wandering.

“Then came, indeed, the Celestial Creature who crushed his head, and the enemy felt such power in Her, that knocked him down, and he did not have the strength to go near Her.  This consumed him with rage, and he employed all his infernal weapons to fight Her.  But—no!  He would try to go near Her, he would feel himself being worn down, his legs being broken, and would be forced to draw back; and from afar he would spy on Her admirable virtues, Her power and sanctity.  And I, in order to confound him and make him doubtful, would let him see the Celestial Sovereign, Her human things, like taking food, crying, sleeping and other things; and he would persuade himself that it was not She, because, being so powerful and holy, She was not to be subject to the natural needs of life.  But then he would go back to doubts, and wanted to return to assault—but in vain.  My Will is Power that debilitates all evils and all the infernal powers; It is Light that makes Itself known by all, and wherever It reigns, It makes Its Power felt, that not even the very demons can get themselves to deny.  Therefore, the Queen of Heaven was, and is, the terror of all hell. 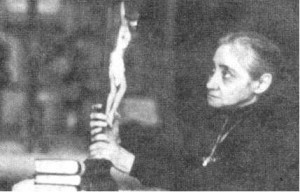 April 28, 1923
Luisa must crush the head of the infernal serpent. The living in the Divine Will is the complete triumph of the Creator over the creature. The primary purpose of the coming of Jesus upon earth was that the Divine Will would triumph over the human will.

I felt as though immersed in the endless light of the Eternal Will, and my sweet Jesus told me: “My daughter, My Divinity does not need to operate in order to make Its works come out – It only needs to want them. So, I want and I do; the greatest works, the most beautiful, come out upon My mere wanting them. On the other hand, even if the creature wanted them, if she does not work, she does not move, she does nothing. Now, to one who makes My Will her own and lives in It as in her own royal palace, the same power is communicated, as much as it is possible for a creature.”

Now, while He was saying this, I felt myself being drawn outside of myself, and I found an ugly monster under my feet, which was biting itself out of rage. And Jesus, being near me, added: “Just as My Virgin Mother crushed the head of the infernal serpent, so do I want another virgin, who must be the first possessor of the Supreme Will, to press that infernal head again, so as to crush it and debilitate it, in such a way as to confine it into hell, that she may have full dominion over it, and it may not dare to approach those who must live in My Will. Therefore, place your foot on its head, and crush it.” Made brave, I did it, and it would bite itself more, and so as not to feel my touch, it shut itself up in the darkest abysses. Then Jesus resumed His speaking: “My daughter, do you think that the living in My Will is nothing? No, no – on the contrary, it is the all, it is the fulfillment of all sanctities, it is the absolute dominion of oneself, of one’s passions, and of one’s capital enemies; it is the complete triumph of the Creator over the creature. So, if she adheres, and I come to having her live in My Will, and she does not want to know her own ever again, I have nothing left to want from the creature, and she has nothing left to give Me. All My yearnings are fulfilled, My designs realized – there is nothing left but to delight in each other. It is true that I came upon earth to redeem man, but My primary purpose was that the Divine Will would triumph over the human will by according these two wills together and making them one, taking the human will into that Will from which it had gone out. This was the main offense that My Celestial Father received from man, and I was to compensate Him for it, otherwise I would not have given Him full satisfaction. But in order to obtain the first purpose, first I had to issue the second – that is, to save him, to extend My hand to him, since he had fallen; to wash him of the mud in which he was lying. How could I say: ‘Come to live in My Will’, if he was horrid to look at, and was under the slavery of the infernal enemy?

Therefore, after having obtained the second purpose, I want to secure the first one – that My Will be done on earth as It is in Heaven, and that man, who had gone out of My Will, enter into Mine once again. And in order to obtain this, I give to this first creature all My merits, all My works and steps, My palpitating Heart, My wounds, My Blood – the whole of My Humanity, to dispose her, to prepare her, to let her enter into My Will. In fact, first she must take the complete fruit of My Redemption, and then, as though in triumph, enter the possession of the immense sea of My Supreme Will. I do not want her to enter as a stranger, but as a daughter; not as poor, but as rich; not as ugly, but as beautiful, as if she were another Me. Therefore, I want to centralize the whole of My life in you (Luisa).” And while He was saying this, it was as if many seas were coming out of Him, which poured upon me, and I remained inside of them, sunken; and at the same time, a Sun, beating down with Its light, receiving the complete fruit of Redemption in order to be able to give the complete fruit of Its Will to the creature. It was the Sun of the Eternal Volition, which celebrated the entrance of the human will into Its own. And Jesus: “This Divine Will of Mine grew within My Humanity like a flower, which I transplanted from Heaven into the true Eden of My terrestrial Humanity. It germinated in My Blood, it bloomed from My wounds, to make of it the greatest gift to the creature. Don’t you want to receive it?”

Permanent link to this article: https://luisapiccarreta.com/315-genesis-315-i-will-put-enmities-between-thee-and-the-woman-and-thy-seed-and-her-seed-she-shall-crush-thy-head-and-thou-shall-lie-in-wait-for-her-heel/