1/30 Photographs Pertaining to the Servant of God, Luisa Piccarreta

2/1 THE DAY OF JESUS IN THE EUCHARIST 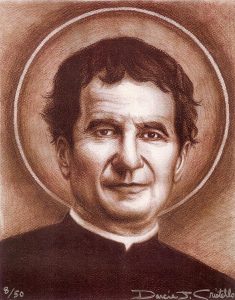 Saint of the Day for January 31

John Bosco’s theory of education could well be used in today’s schools. It was a preventive system, rejecting corporal punishment and placing students in surroundings removed from the likelihood of committing sin. He advocated frequent reception of the sacraments of Penance and Holy Communion. He combined catechetical training and fatherly guidance, seeking to unite the spiritual life with one’s work, study and play.

Encouraged during his youth to become a priest so he could work with young boys, John was ordained in 1841. His service to young people started when he met a poor orphan and instructed him in preparation for receiving Holy Communion. He then gathered young apprentices and taught them catechism.

After serving as chaplain in a hospice for working girls, John opened the Oratory of St. Francis de Sales for boys. Several wealthy and powerful patrons contributed money, enabling him to provide two workshops for the boys, shoemaking and tailoring.

By 1856, the institution had grown to 150 boys and had added a printing press for publication of religious and catechetical pamphlets. His interest in vocational education and publishing justify him as patron of young apprentices and Catholic publishers.

John’s preaching fame spread and by 1850 he had trained his own helpers because of difficulties in retaining young priests. In 1854, he and his followers informally banded together, inspired by Saint Francis de Sales.

With Pope Pius IX’s encouragement, John gathered 17 men and founded the Salesians in 1859. Their activity concentrated on education and mission work. Later, he organized a group of Salesian Sisters to assist girls.

Permanent link to this article: https://luisapiccarreta.com/131-feast-of-st-john-bosco/