10/10 EXCHANGE OF WILLS BETWEEN THE CELESTIAL FATHER AND THE MOST HOLY VIRGIN, AND LUISA

10/9 MIRACULOUS CURE OF ST. JOHN DAMASCENE BY OUR LADY 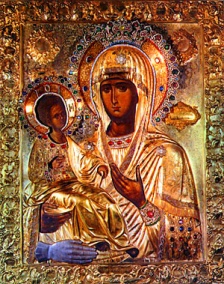 The Abbot Orsini wrote: “In the year 723, in the night following the day when the prince of the Saracens had unjustly ordered the hand of Saint John Damascen to be cut off, Our Lady reunited it miraculously to his wrist, after this faithful servant had prayed to her for it with the design of continuing to write in defense of holy images.”

According to tradition, a Muslim caliph unjustly ordered that Saint John’s right hand should be cut off and hung up for public display. Some days after this despicable act took place, Saint John prayed for the restoration of his hand. Saint John had an icon of the Blessed Virgin before which he fervently prayed, and soon his hand is said to have been miraculously restored. To recognize the miracle, and in appreciation for the return of his right hand, Saint John had a replica of his restored hand produced in silver, which he then placed at the bottom of the icon. Those who came after him, and saw the third hand on the icon, subsequently named it “Three-handed,” or Tricheirousa.

The Bogorodica Trojerucica is considered the most important icon of the Serbian Orthodox Church. It is currently located in a monastery of Hilandar on Mount Athos, Greece. The portrait is of the Blessed Virgin Mary with the Divine Child in her right arm. It is thought to have possibly been painted by Saint John Damascene himself, but however that may be, it is the very same image before which he prayed for the restoration of his severed hand.

“Gratitude for the benefits received at the hands of the Lord is a virtue so noble, that by means of it we may preserve our intercourse and correspondence with God Himself: He, as rich, generous and powerful conferring upon us his gifts; we, as poor, humble and aware of our needs, returning for them our thanks. He desires to give us plentifully, but at the same time He wishes us to be grateful, rendering Him the glory, honor and praise contained in gratitude.” *

*from The City of God, by Ven. Mary of Agreda

Icon of the Mother of God of “the Three Hands”

The Icon of the Mother of God, “Of the Three Hands”: In the eighth century during the time of the Iconoclasts, St. John of Damascus (December 4) was zealous in his veneration of holy icons. Because of this, he was slandered by the emperor and iconoclast Leo III the Isaurian (717-740), who informed the Damascus caliph that St. John was committing treasonous acts against him. The caliph gave orders to cut off the hand of the monk and take it to the marketplace. Towards evening St. John, having asked the caliph for the cut-off hand, put it to its joint and fell to the ground before the icon of the Mother of God. The monk begged Our Lady to heal the hand, which had written in defense of Orthodoxy. After long prayer he fell asleep and saw in a dream that the All-Pure Mother of God had turned to him promising him quick healing.

Before this the Mother of God bid him toil without fail with this hand. Having awakened from sleep, St. John saw that his hand was unharmed. In thankfulness for this healing St. John placed on the icon a hand fashioned of silver, from which the icon received its name “Of Three Hands.” (Some iconographers, in their ignorance, have mistakenly depicted the Most Holy Theotokos with three arms and three hands.) According to Tradition, St. John wrote a hymn of thanksgiving to the Mother of God: “All of creation rejoices in You, O Full of Grace,” which appears in place of the hymn “It is Truly Meet” in the Liturgy of St. Basil the Great.

St. John Damascene accepted monasticism at the monastery of St. Sava the Sanctified and there bestowed his wonderworking icon. The Lavra presented the icon “Of Three Hands” in blessing to St. Sava, Archbishop of Serbia (+ 1237, January 12). During the time of an invasion of Serbia by the Turks, some Christians who wanted to protect the icon, entrusted it to the safekeeping of the Mother of God Herself. They placed it upon a donkey, which without a driver proceeded to Athos and stopped in front of the Hilandar monastery. The monks put the icon in the monastery’s cathedral church (katholikon). During a time of discord over the choice of igumen, the Mother of God deigned to head the monastery Herself, and from that time Her holy icon has occupied the igumen’s place in the temple. At the Hilandar monastery there is chosen only a vicar, and from the holy icon the monks take a blessing for every obedience.

In Slavic usage, this Icon is commemorated on July 12.

Permanent link to this article: https://luisapiccarreta.com/109-miraculous-cure-of-st-john-damascene-by-our-lady/