10/9 MIRACULOUS CURE OF ST. JOHN DAMASCENE BY OUR LADY

Our Lady of Gifts 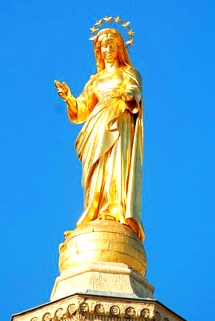 Saint Martha of Bethany was the sister of Lazarus and Mary. She it was who is mentioned in the New Testament waiting on Jesus “troubled about many things.” According to the Golden Legend, after Jesus’ death and resurrection, she left Judea with her brother and sister “in a ship without sail, oars, or rudder.” This occurred in about the year 48 AD.

Their boat was conducted on its way by Our Lord from heaven. Martha went first to the territory of Aquenese or Aix, a region now known as Provence, France. After converting the people to the True Faith, she and her siblings then travelled on to settle in Avignon.

There is a tradition that attributes the foundation of the church of Our Lady of Gifts, or “Our Lady of Doms,” at Avignon, to Saint Martha, and this while Our Lady was still alive! This church was built over what remained of a pagan temple atop a hill called “Le Rocher des Doms.” It is reported that this church was visibly consecrated by Our Lord Himself. Later in history the church was demolished by the Saracens, and was repaired by the Emperor Charlemagne.

“There was at that time upon the river of Rhone, in a certain wood between Arles and Avignon, a great dragon, half beast and half fish, greater than an ox, longer than a horse, having teeth sharp as a sword, and horned on either side; head like a lion, tail like a serpent, and defended him with two wings on either side, and could not be beaten with cast of stones nor with other armor, and was as strong as twelve lions or bears; which dragon lay hiding and lurking in the river, and perished them that passed by and drowned ships. He came thither by sea from Galicia, and was engendered of Leviathan, which is a serpent of the water and is much wood, and of a beast called Bonacho, that is engendered in Galicia. To him Martha, at the prayer of the people, came into the wood, and found him eating a man. And she cast on him holy water, and showed to him the cross, which anon was overcome, and standing still as a sheep, she bound him with her own girdle, and then was slain with spears and glaives of the people.”

Also known as Avignon Cathedral, and the Cathedrale Notre-Dame des Doms d’Avignon in French, the church at the present location was constructed in the 12th century in the Romanesque style. The seat of the Archbishop of Avignon, it is also a national monument in France. Atop the western tower is the large gilded statue of the Blessed Virgin Mary shown above.

Expectation of a new era.  The surest sign that it is near.

As I was in my usual state, my good Jesus came, but all afflicted.  It seemed to me that He could not detach from me, and, all goodness, told me:  “My daughter (Luisa), I have come to make you suffer.  Don’t you(Luisa) remember when I wanted to chastise man and you (Luisa) did not want Me to, wanting to suffer yourself in their place, and in order to make you (Luisa) content, I told you (Luisa) that instead of doing ‘ten’, for love of you (Luisa) I would do ‘five’[]?  Now the nations want to fight against one other, and those which believe themselves to be the most powerful are taking up arms to their teeth in order to destroy the weak nations.  This is about total destruction, my daughter.  This is why I have come to make you (Luisa) suffer – to give you (Luisa) that ‘five’ which I promised you.  My justice will give to fire and water the power of the office which they contain, in order to destroy peoples and entire cities; therefore, a little bit of your suffering is necessary in order to reduce the chastisements by half.”

Now, while He was saying this, He moved in my interior, as though holding many instruments in His hands; and as He moved them, sufferings and pains were formed, with such tearing of all my members that I don’t know how I remained alive.  And when He would see me moaning and shivering because of the intensity of the pains, with the air of one who has triumphed over everything, Jesus would say to me:  “You (Luisa) are my Life, and with my Life I can do whatever I want.”  And He would continue His crafting to make me suffer.  May everything be for the glory of God, for the good of my soul, and for the salvation of all.

Then, afterwards, He added:  “My daughter (Luisa), the whole world is upside down, and everyone is awaiting changes, peace, new things.  They themselves gather to discuss about it, and are surprised at not being able to conclude anything and to come to serious decisions.  So, true peace does not arise, and everything resolves into words, but no facts.  And they hope that more conferences may serve to make serious decisions, but they wait in vain.  In the meantime, in this waiting, they are in fear, and some prepare themselves for new wars, some hope for new conquests.  But, with this, the peoples are impoverished, are stripped alive, and while they are waiting, tired of the sad present era, dark and bloody, which enwraps them, they wait and hope for a new era of peace and of light.

The world is exactly at the same point as when I was about to come upon earth.  All were awaiting a great event, a new era, as indeed occurred.  The same now; since the great event, the new era in which the Will of God may be done on earth as It is in Heaven, is coming – everyone is awaiting this new era, tired of the present one, but without knowing what this new thing, this change is about, just as they did not know it when I came upon earth.  This expectation is a sure sign that the hour is near.  But the surest sign is that I am manifesting what I want to do, and that turning to a soul, just as I turned to my Mama in descending from Heaven to earth, I communicate to her my Will and the goods and effects It contains, to make of them a gift for the whole of humanity.

Permanent link to this article: https://luisapiccarreta.com/108-feast-of-our-lady-of-gifts/