4/23 Tomorrow is the Anniversary of the Birth of the Servant of God, Luisa Piccarreta

THE TESTIMONY OF EUGENIA CARVELLI

Luisa had a good word for everybody, a word of hope”

The Testimony of Eugenia Carvelli 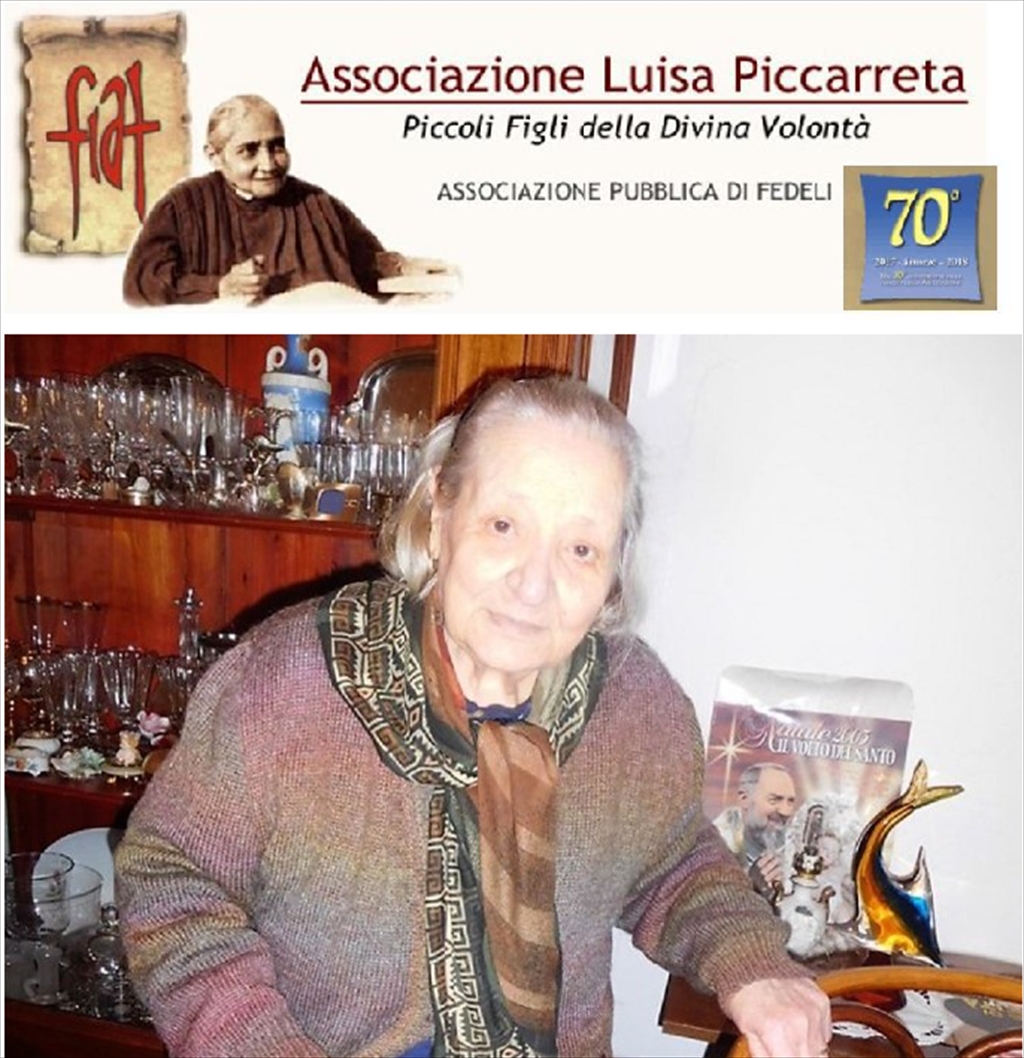 Miss Eugenia Carvelli died on April 13th at the age of 93. She was one of the lucky people who knew the servant of God Luisa Piccarreta. Eugenia was born in Catanzaro on 10 March 1925. She was the last of six siblings, and lost both her parents at the age of three. The children, left orphans, were entrusted to a different orphanage. Providence brought Eugenia to the Institute of the Sisters of Divine Zeal in which she remained until she reached the age of majority. And it was in this place that her meeting with Luisa originated.

We report, below, some excerpts of an interview that was made with Dr. Marina Labartino and published on Lostradone newspaper in which her memories emerge.

“For the most part, during the summer or on the warm days of spring and autumn, I and the other girls had the task of taking Luisa out in the garden, on the wheelchair, after lunch, during the recreation … Luisa attended the Mass from access to the sacristy sitting on the wheelchair; she lived in a room close to the chapel, and was helped by her sister Angelina and another attendant … .. She spoke very little – Eugenia continued – she always spoke only of the Divine Will “.

In the convent, Eugenia received the sacraments of Reconciliation, Eucharist and Confirmation. Miss Maria Greca Calvi, sister of Don Benedetto accompanied her on the Christian path. In fact, she became Eugenia’s godmother of Confirmation, and promised her that, at the age of majority, she and Don Benedetto would welcome her into their home as a niece. And so it happens. At the age of 21, Eugenia left the orphanage and went to live with them; she was joined to them by a deep bond, and when she spoke to them she affectionately called them “Uncle Benedetto” and “Aunt Maria Greca”.

After her transfer to Calvi family’s house, Eugenia went with Maria Greca to visit Luisa in her house in Via Maddalena, every afternoon and spent time with her for about an hour. ” We often talked with her sister Angelina in the other room, because there were always so many people in Luisa’s that we preferred to move or leave … Luisa had a good word for everybody, a word of hope. Most people who went to her, suffered from some disorder or illness, or worried about some family members. Luisa told them to entrust themselves to the Divine Will, that the strength to bear everything would come from God. Also the foreigners who came from anywhere were so many, they came even from America “.

Eugenia reported that she often saw Luisa with a booklet in her hand while writing. “When it happened, Aunt Maria Greca and I, we immediately moved to the next room so as not to disturb.” She also remembered the molten iron bowl near the bed where Luisa vomited all her food: “Luisa ate very little, more liquid things, but after an hour she vomited everything. She was unable to throw up only the Eucharist”.

The thing that fascinated her most was the fact that Luisa never complained, that she was always sitting, in the same position for years, yet she had no sores, as it happens to people who are bedridden  for a long time.

Eugenia remembered vividly also the day of Luisa’s funeral: We were called immediately. Aunt Maria Greca and I, we ran to help dress her. As her body was soft and flexible,  we also tried to stretch it on the bed, holding it firm, but, as we loosened the grasp, the body lifted up again and restored the original position that it had held for so many years. Each of our operations aimed at lying down was vain. As Luisa remained in a sitting position when she was  alive, so she remained even after death. So, a coffin especially for her was built. “

Even the memories of the exhumation of Luisa’s body in 1963 were still shining: “Aunt Maria Greca and I, we cleaned the bones, one by one, with pieces soaked in alcohol. A few tiny fragments and the shirt that was worn by Luisa was cut into strips and given to those who wanted a memory of her. Together with some dressmakers devoted to Luisa, we made many small cardboard hearts covered with white silk. Inside, between the two cardboard hearts, we inserted the relics: some shreds of cloth or crumbs of bones. Nothing was lost or thrown away. During Mass celebrated by Uncle Benedetto in Santa Maria Greca,  there were so many foreigners. Then what remained of Luisa’s body was buried in a grave placed on one side of the Church of Santa Maria Greca “.

It is always nice to read or listen to testimonies of people who knew Luisa, because they also allow us to have a direct encounter with her humanity.

Permanent link to this article: https://luisapiccarreta.com/the-testimony-of-eugenia-carvelli/