Expectation of A New Era

The Necessity of the Mystical Marriage in the Divine Will

The Necessity of the Mystical Marriage in the Divine Will 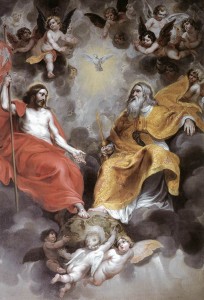 December 5, 1921
One who does not accept the gifts of God is ungrateful. The gift of the Divine Will was given to Luisa from the time of the Renewal of Mystical Marriage before the Holy Trinity, thirty-two years before. Doubts and difficulties. Jesus answers them in advance.

After I wrote that which is said above, I felt all concerned and, more than ever, annihilated. And as I began to pray, my always lovable Jesus came, and clasping me tightly to His Heart, told me: “Daughter of My Will, why do you not want to Recognize the Gifts that your Jesus Wants to Give you? This is highest ingratitude. Imagine a king, surrounded by his faithful ministers, and a poor boy, barefooted and ragged, who, taken by love of seeing the king, goes up to the royal palace, and making himself smaller than he is, looks at the king from behind the ministers, and then lowers himself for fear of being discovered. The king notices this, and while the boy is huddled behind the ministers, he calls him and takes him aside. The little one trembles and blushes, fearing of being punished, but the king presses him to his heart and says to him: ‘Do not fear, I took you aside to tell you that I want to raise you above all. I want you to surpass all the gifts I that I gave to my ministers, nor do I want you to leave my royal palace ever again…’ If the boy is good, he will accept with love the proposal of the king; he will tell everyone of how good the king is. He will say it to the ministers, calling everyone to thank the king. If then he is ungrateful, he will refuse to accept, saying: ‘What do you want from me? I am a little one – poor, ragged and barefooted. These gifts are not for me.’ And he will keep in his heart the secret of his ingratitude. Is this not a horrendous ingratitude? And what will happen to that boy? So you are: because you see yourself unworthy, you would rather get rid of My Gifts.”

And I: ‘My Love, you are right, but what concerns me the most is that You always want to speak about me.’ And He: “It is Right, it is Necessary that I speak about you. Would it be nice if a bridegroom who is about to marry his bride, were forced to deal with others but not with her; while it is necessary that they confide their secrets to each other, that one know what the other has, that their parents provide this couple with a dowry, and that they become used to each other’s ways in advance?”

And I added: ‘Tell me, my Life, who is my Family? What is my dowry and Yours?’ And smiling, He continued: “Your family is the Trinity. Don’t you remember that in the first years of bed I took you to Heaven and we celebrated our Union before the Most Holy Trinity? It endowed you with such Gifts that you yourself have not yet known; and as I speak to you about My Will, about Its Effects and Value, I make you discover the Gifts with which, from that time, you were endowed. I do not speak to you about My dowry, because what is Mine is yours. And then, after a few days, We, the Three Divine Persons, descended from Heaven, took Possession of your heart, and Formed Our Perpetual Residence in it. We took the Reins of your intelligence, of your heart, and of all of yourself; and everything you did was an Outpouring of Our Creative Will over you, and the confirmation that your human will was animated by an Eternal Will.

The work is already done. There is nothing left but to make it Known, so that, not only you, but others also may take part in these Great Goods. And this I AM doing by Calling now one minister, now another, and even ministers from places afar, to make Known to them these Great Truths. Therefore, this thing is Mine – not yours; so, let Me do. Even more, You Must Know that every time you manifest one additional value of My Will, I Feel So Much Contentment that I Love you with Multiplied Love.”

And I, blushing about my difficulties, said: ‘My Highest and Only Good, see how I have become more bad. Before I used to have no doubts about what You told me; now – no; how many doubts, how many difficulties. I myself don’t know where I go fishing for them.’ And Jesus: “Do not worry about this either. Many times I Myself cause these difficulties in order to answer not only you, confirming to you the Truths that I tell you, but to answer all those who, in reading these Truths, may find doubts and difficulties. I answer them in advance, so that they may find Light, and all of their difficulties may be dissolved. Criticism will not be lacking; therefore, Everything is Necessary.”

“I will Espouse you in the Faith” – mean nothing less but that the Lord, in this Mystical Marriage, comes to endow the souls with His own Virtues.

It seems to me that it happens as to two spouses: as they join their properties together, the belongings of one can no longer be distinguished from those of the other, but both of them become their owners.

However, in our case, the soul is poor – All the Good comes from the Lord, who lets her Share in His Possessions.

Permanent link to this article: https://luisapiccarreta.com/the-necessity-of-the-mystical-marriage-in-the-div-ine-will/