Return to THE HOLY MASS

A Short History of the Roman Mass 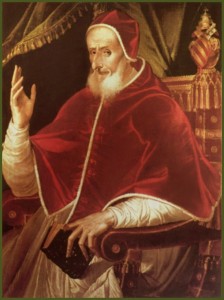 Portrait of St. Pius V, who codified the Roman Mass for all time.

A Short History of the Roman Mass

“Our Mass goes back, without essential change, to the age when it first developed out of the oldest liturgy of all. It is still redolent of that liturgy, of the days when Caesar ruled the world and thought he could stamp out the faith of Christ, when our fathers met together before dawn and sang a hymn to Christ as to a God. The final result of our inquiry is that, in spite of unsolved problems, in spite of later changes, there is not in Christendom another rite so venerable as ours.”

“From roughly the time of St. Gregory [d. 604] we have the text of the Mass, its order and arrangement, as a sacred tradition that no one has ventured to touch except in unimportant details.”

THE first source for the history of the Mass is obviously the account of the Last Supper in the New Testament. It was because Our Lord told us to do what He had done, in memory of Him, that Christian liturgies exist. No matter in which respects there are differences in the various Eucharistic liturgies they all obey His command to do “this,” namely what He Himself had done. A definite pattern for the celebration of the Eucharist had developed within decades of the death of Our Lord, a pattern which was carried on well past the conclusion of the 1st century, and which can still be discerned clearly in the finalized Roman Mass of 1570.

The earliest and most detailed account of the Eucharist is found in St. Paul’s First Epistle to the Corinthians, which, of course, predates the Gospels, and was written in Ephesus between 52-55 A.D. Scholars agree that the Consecration formula used by St. Paul in 1 Corinthians, Chapter 11, quotes verbatim from a stylized formula already in use in the Apostolic liturgy. St. Paul’s account reads:

For I have received of the Lord that which also I delivered unto you, that the Lord Jesus, the same night in which He was betrayed, took bread, and giving thanks, broke, and said: Take ye, and eat: This is My Body, which shall be delivered for you: this do for the commemoration of Me.

Therefore whosoever shall eat this Bread, or drink the Chalice of the Lord unworthily, shall be guilty of the Body and of the Blood of the Lord. [1 Cor: 11:23-27].

The passage is rich in doctrine. It identifies the Eucharist with the Passion. A new and permanent covenant or alliance is concluded between God and man in the Blood of Jesus. His sacrifice was mystically anticipated at the Last Supper. The Apostles, and implicitly their successors, are commanded to celebrate the Eucharist in His memory; and this remembrance is of such efficacy that it is an unceasing proclamation of His redemptive death, and renders it actually present until the day when He returns in the full glory of His Second coming. The Eucharist is the memorial of the Passion, anamnesis in Greek, and it commemorates the Passion by renewing it in an unbloody manner upon the altar. Finally, great purity of soul is required to take part in a rite as sacred as the offering and reception of the Body and Blood of Our Saviour.

By combining St. Paul’s account with those of the four synoptic Gospels, we have the essentials of the Eucharistic liturgy in every ancient rite. Our Lord took bread, gave thanks, blessed and broke it, and gave it to His Apostles to eat; then He took a cup of wine, again gave thanks [Luke and Paul do not add this second thanksgiving], said the words of Institution [or Consecration] over it, and gave it to them to drink. We thus have the five essential elements for the Christian Eucharist: 1) Bread and wine are brought to the altar; 2) The celebrant gives thanks; 3) He takes bread, blesses it and says the words of Consecration; 4) He does the same over the wine; 5) The consecrated Bread, now having become the Body of Christ, is broken and is given to the people in Communion together with the contents of the Chalice, that is, the Precious Blood.

Our knowledge of the liturgy increases considerably in the 2nd century, and special reference must be made to the testimony of a pagan Roman—–the younger Pliny [C. Plinius Caecilius, c. 62-113], at that time Governor of Bithynia [modern Northwest Turkey]. About the years 111-113 he writes to his master, the Emperor Trajan, to ask how he is to treat Christians. He describes what he has learned about them from Christians who had apostatized under torture. Referring to his apostate informers, he writes with satisfaction: “All have worshiped your image and the statues of the gods and have cursed Christ.” Then he recounts what the apostates revealed about Christian worship:

They assert that this is the whole of their fault or error, that they were accustomed on a certain day [stato die] to meet together before daybreak [ante lucem], and to sing a hymn alternately [secum invicem] to Christ as a god, and that they bound themselves by an oath [sacramento] not to do any crime, but only not to commit theft nor robbery nor adultery, not to break their word nor to refuse to give up a deposit. When they had done this, it was their custom to depart, but to meet again to eat food—–ordinary and harmless food however. They say that they [the apostate informers] have stopped doing; this after my edict which forbade private assemblies [hetaerias] as you commanded. 1

The status dies is certainly Sunday. There are, according to Pliny, two meetings, the early one, in which they sing their hymn, and a later one, when they eat food—–the Agape or Eucharist. The oath to do no wrong is probably a confusion of Pliny’s mind. He would have taken it for granted that these secret meetings must involve some kind of conspirator’s oath; whereas, the only obligation of which his informers could tell him was not to do wrong. Pliny’s letter does not add much to our knowledge of the early liturgy, but it is worth quoting for the picture it gives, one of the first mentions of Christianity by a pagan, of the Christians meeting before daybreak and singing their hymn “to Christ as a god.” The early Christians assembled for Divine worship in the house of one of their number which possessed a large dining room, a coenaculum, as the Vulgate puts it. This was because, as a persecuted minority, they could erect no public buildings. Our knowledge of the details of the liturgy increases from the earliest Fathers and with each succeeding century. There is a gradual and natural development. The prayers and formulas, and eventually the ceremonial actions, develop into set forms. There are varying arrangements of subsidiary parts and greater insistence on certain elements in different places will produce different liturgies, but all go back eventually to the biblical pattern. The Roman Mass is a liturgical form that we find first, not in the laws of some medieval pope, but in the Epistles, the Acts of the Apostles, and the Gospels.

Permanent link to this article: https://luisapiccarreta.com/the-holy-mass/a-short-history-of-the-roman-mass/