Feast of Pentecost in the Divine Will

Prayer for the Glorification of the Servant of God, Luisa Piccarreta 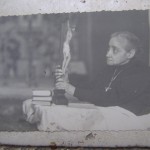 The Servant of God

It was during the year 1917. The new Archbishop of Trani, Archbishop Regime, perhaps influenced by that part of the clergy, who not only attached no importance to all that was happening to Luisa Piccarreta but openly manifested their hostility to the Servant of God, had established a very severe decree with regard to Luisa: priests were prohibited from entering her house and from celebrating Holy Mass there, a privilege which had been granted to Luisa by Pope Leo XIII and confirmed by Pope Pius X in 1907.

This measure was to be read out in all the churches of the diocese. This is what happened:

While he was signing his “famous decree”, he was suddenly afflicted by partial paralysis. When the priests present at that moment came to his help, he made them understand that he wanted to be taken to Luisa’s house.

Aunt Rosaria described this unusual episode in this way:

“It was about eleven o’clock when we heard the sound of a carriage that stopped right outside the porch of Luisa’s house. I looked out from the balcony to see who it was and saw three priests, one of them, as it were, supported by the other two. Luisa said to me: ‘Open the door, the bishop is coming’. In fact, Archbishop Regime was at the door, supported by two other priests“,probably the vicar and chancellor of the Curia of Trani, “the bishop was uttering incomprehensible words. He was immediately ushered into Luisa’s room. It was his first visit to the home of the Servant of God, who, as soon as she saw him, said: “Bless me, Your Excellency“. The bishop raised his hand as though nothing had happened and blessed her. He was completely cured! Archbishop Regime remained in Luisa’s room in a secret conversation for about two hours, and to the wonder of all, especially the priests, he emerged from her room smiling. He blessed those present and left“.

An effort was made to keep the case secret, and so it remained to the wider public. As long as he was in Trani, Archbishop Regime regularly visited Luisa Piccarreta, with whom he would have spiritual conversations. This episode inspired a sacred fear in the clergy and Luisa’s holy confessor, Gennaro di Gennaro, was able to continue his ministry more peacefully. After this event, St. Annibale Maria Di Francia also visited the Servant of God more often.

Permanent link to this article: https://luisapiccarreta.com/the-bishop-healed/