‘The Kingdom of The Divine Will in the midst of creatures.  Book of Heaven.The call of the creature to the O rder, the Place and the Purpose for which he was created by God’ 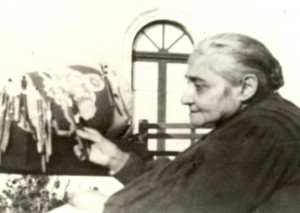 Divine messengers that bring the good news to the Celestial Fatherland.  How the Divine Will is not content with only words, but wants to do deeds.

My abandonment in the Divine Volition continues, and I try as much as I can to unite my little acts to those of the Divine Will, so as to form a single one with Its acts, almost to be able to say:  “Whatever You do, I do.  I plunge myself into Your light in order to extend myself together with You, and in this way I can embrace and love all with Your own Will.”

But while I was doing this, my beloved Jesus told me:  “My daughter(Luisa), the acts done in My Divine Will have such virtue and power as to transform themselves into Divine Messengers, that set off from the earth for the vault of the Heavens.  And since these messengers set off from within My Divine Will, but sent by a creature who operates and lives in It, they bring with themselves free entrance into Our Celestial Fatherland, and bring the happy news that the earth wants the Kingdom of Our Will, because a little exiled one lives and operates in It, and does nothing but make use of that same Will that reigns in Heaven in order to ask that It may descend to reign upon earth as It reigns in Heaven.  These messengers of light—how many secrets do they not hide!  Already on its own, the light of Our Divine Will is the secretary of all things, Divine and human, and it knows how to keep the true secret; and while in appearance one sees light, inside this light it hides all secrets and all things—no one can escape it.  This light contains the great secret of the whole history of Creation, and it confides its secrets only to one who wants to live in its light.  In fact, the light has the virtue of disposing the creature to live and to comprehend its Divine Secrets, and, if needed, it will dispose her to lay down her life so that it may give life to its intimate secrets and to the purpose of Creation, which was only that Our Will would reign on earth as It does in Heaven.

“Therefore, My daughter(Luisa), if you(Luisa) remain attentive to live always of My Will, It will entrust to you(Luisa) all the secrets of the history of Creation, It will make in your soul the deposit of all Its joys and Its intimate sorrows, and, as to Its own secretary, with Its vibrating light, transforming Itself into brush, It will paint in you(Luisa) the sun, the heavens, the stars, the sea, the beautiful flowerings.  In fact, when It speaks, It is not content with only words; to Its inextinguishable Love and to Its interminable Light words are not enough, but It wants to do deeds; and therefore, with Its Creative Virtue, while It entrusts Its secrets, It speaks and forms the New Creation in the creature.  It is not content with telling Its secrets, but It wants to do the works that Its secrets contain.  Therefore, in the creature who lives in My Will, new heavens, suns more refulgent than the very Creation, will be seen.  In fact, you(Luisa) must know that My Will has a yearning, an ardent desire, of wanting to always operate; but It keeps looking for one who wants to listen to It, and who wants to receive Its Creative Virtue, so as not to expose Its works to uselessness.  And in order to be sure, It keeps looking for Its own Will in the soul; and, in finding It, It finds Its works secured by Its same Divine Fiat; therefore It spares Itself in nothing, and there It does the most beautiful works and the greatest prodigies.  Oh! Power of My Omnipotent Will—if all knew You, loved You and let You reign, the earth would turn into Heaven.”

Permanent link to this article: https://luisapiccarreta.com/reflection-from-book-of-heaven/the-acts-done-in-the-divine-will-are-divine-messengers-to-the-celestial-fatherland/