To the priests, as to new prophets, is the task given to make known the Divine Fiat 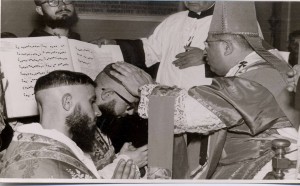 PASSAGES ON TO THE PRIESTS, AS TO NEW PROPHETS, IS THE TASK GIVEN   TO MAKE KNOWN THE DIVINE FIAT FROM THE BOOK OF HEAVEN

I was continuing my round in the acts of the Divine Fiat, and as I reached the point in which I would accompany the Prophets when the Divine Volition manifested Itself to them—the how and the when of the coming of the future Redeemer—and the Prophets longed for Him with tears, prayers and penances, making everything they did my own, because all this was the fruits of the Eternal Divine Fiat, I offered it in order to impetrate Its Kingdom upon earth.

But while I was doing this, my sweet Jesus, moving in my interior, told me:  “My daughter(Luisa), when a good is universal and must and can bring good to all, it is necessary that entire peoples—and if not everyone, a great part—know the good that they must receive, and with prayers, sighs, desires and works, they impetrate a good so great, in such a way that first the good they want is conceived in their minds, sighs, desires, works, and even in their hearts, and then is the good that they longed for given to them in reality.  When a good that must be received is universal, it takes the strength of a people to impetrate it; on the other hand, when it is individual or local, one can be enough to obtain the intent.

“Therefore, before coming upon earth and being conceived in the womb of the Sovereign Queen of Heaven, I can say that I was conceived in the minds of the Prophets, and I confirmed and gave value to this sort of conception in them through My manifestations of the when and the how I was to come upon earth in order to redeem mankind.  And the Prophets, faithful executors of My manifestations, acted as trumpeters, manifesting to the peoples, with their words, what I had manifested about My coming upon earth; and conceiving Me in their words, they made the news that the Word wanted to come upon earth fly from mouth to mouth.  And by this, not only was I conceived in the word of the Prophets, but I remained conceived also in the word of the people, in such a way that all talked about it, and prayed, and longed for the future Redeemer.

“And when the news of My coming upon earth was diffused among the peoples, and almost an entire people, with the Prophets at the head of it, prayed and longed for, with tears and penances—only then, being as though conceived in their wills, I let the Queen come to life, in whom I was to conceive in reality, so as to make My entrance into a people that had been longing for Me and desiring Me for forty centuries.  What a crime would the Prophets not have committed, had they concealed, hidden within themselves, My manifestations about My coming.  They would have prevented My conception in the minds, in the prayers, words and works of the people—a necessary condition for God’s being able to concede a universal good, which was My coming upon earth.

“Now, My daughter(Luisa), the Kingdom of Redemption and the Kingdom of My Divine Fiat hold hands, and since It is also a universal good, such that, if they want it so, all can enter into It, it is necessary that many know the news about It, and that It be conceived in the minds, in the words, in the works and hearts of many, so that, through prayers, desires, and a holier life, they may dispose themselves to receive the Kingdom of My Divine Will into their midst.  If the news is not divulged, My manifestations will not act as trumpeters, nor will the knowledges about My Divine Fiat fly from mouth to mouth, forming the conception of It in the minds, prayers, sighs and desires of creatures.  My Divine Volition will not make Its triumphant entrance, of coming to reign upon earth.

“How necessary it is that the knowledges about My Fiat be known; not only this, but that it be made known that My Divine Will already wants to come to reign on earth as It does in Heaven into the midst of creatures.  And it is to the priests, as to new prophets, through the word as well as through writing and through works, that the task is given of acting as trumpeters in order to make known what regards My Divine Fiat; nor would their crime be lesser than that of the Prophets, had these hidden My Redemption, if they do not occupy themselves as much as they can with what regards My Divine Will.  They themselves would be the cause of a good so great being neither known nor received by creatures; and to suffocate the Kingdom of My Divine Will, to keep suspended a good so great, such that there is no other similar to it—is this perhaps not a crime?  Therefore, I recommend to you(Luisa) :  on your part, do not omit anything, and pray for those who must occupy themselves with making known a good so great.”

Then He added with a more tender and afflicted tone:  “My daughter(Luisa), this was the purpose for which I permitted the necessity of the coming of the priest—that you(luisa) might deposit in them, as a sacred deposit, all the truths that I have spoken to you(Luisa) about My Divine Fiat, and that they be attentive and the faithful executors of what I want—that is, that they make the Kingdom of My Divine Will known.  Be certain that I would not have permitted their coming if not for the purpose of fulfilling My great designs over the destiny of the human family.

“And just as in the Kingdom of Redemption I left My Queen Mama in the midst of the Apostles, so that, together with Her, helped and guided by Her, they might give start to the Kingdom of Redemption—because the Sovereign Queen of Heaven knew more than all of the Apostles, She was the most interested; it can be said that She kept It formed within Her maternal Heart, therefore She could very well instruct the Apostles in the doubts, in the way, in the circumstances; She was the true Sun in their midst, and one word of Hers was enough for My Apostles to feel strong, illuminated and fortified—in the same way, for the Kingdom of My Divine Fiat, having placed in you(Luisa) the deposit of It, I keep you(Luisa) in the exile still, so that the priests might draw from you(Luisa), as from a new mother, what can serve as light, as guidance, as help, to give start to making known the Kingdom of My Divine Will.  And as I see their little interest—if you(Luisa) knew how much I suffer….  Therefore, pray, pray.”

Permanent link to this article: https://luisapiccarreta.com/reflection-from-book-of-heaven/824-2/