Letter # 20 of The Servant of God, Luisa Piccarreta

GOD THE FATHER AND THE DIVINE WILL 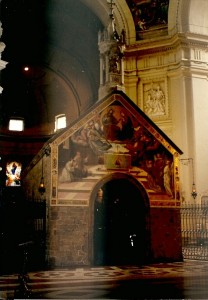 The dates are from noon on August 1 until midnight on August 2, the feast of Our Lady of the Angels.

Plenary indulgence goes from noon on August 1 until midnight August 2.  Two Masses during the All Night Vigil will cover each day!

On a hot July evening in the year 1216 Saint Francis of Assisi at prayer devoured by his love for God and a thirst to save souls was visited upon by Our Blessed Savior and Our Blessed Mother. Our Lord spoke to him “Francis you are very zealous for the good souls. Ask me what you want for their salvation.” Francis answered that he wanted an indulgence to all those who enter this church,(The Portiuncula)  who are truly contrite and have confessed their sins. Our Lord consented to Francis’ wish, but only after he received approval from Pope Honorius III. The pope granted this petition, and this indulgence has been extended to all parish churches throughout the world from noon August 1 until midnight on August 2.

The conditions to obtain the Plenary Indulgence of the Forgiveness of Assisi (for oneself or for a departed soul) are as follows:

* Sacramental confession (during eight days before or after the dates below)

* Participation in the Mass and Eucharist.

* Recitation of the Apostles’ Creed, Our Father and a prayer for the pope’s intention.

The Portiuncula Indulgence is a grace not to be missed, not only for yourself but for the many souls suffering in purgatory.

Permanent link to this article: https://luisapiccarreta.com/portiuncula-plenary-or-partial-indulgence/