The Priesthood And The Holy Sacrifice of The Mass 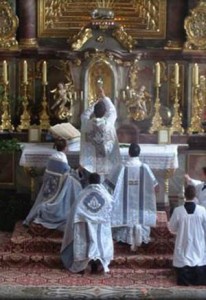 The Priesthood and the Sacrifice of the Mass

By now, there must be as many definitions of the priesthood as there are dictionaries in print. But in the Catholic Church, the priest exists for one main purpose: to offer the Sacrifice of the Mass.

There would be no Catholic Church. This may sound strange, even exotic. But the fact of life is So true is this that, without the priesthood, there would not only be no Sacrifice of the Mass. that God became man in order to sacrifice Himself on the Cross by dying for the salvation of the world. Having died once on Calvary, He continues offering Himself in every Mass so totally that He would be willing to die every time that Mass is offered.

It is impossible to exaggerate this identification. The Catholic Church exists mainly that the Sacrifice of the Mass may continue to be offered from thousands of altars every day, even until the end of time. True, Jesus died only once physically. But every time that Mass is offered, He is ready and willing to die and offer His life for the salvation of the world.

It is impossible to exaggerate the importance of identifying Christianity with the Cross. The human race began to sin from the time of our first parents. It has continued sinning over the centuries throughout the world. We can safely say that God would long ago have destroyed the world because of its sin, except that the Sacrifice of the Mass had been offered by now on thousands of altars throughout the world. People may wonder why the Catholic Church so emphasizes the importance of the Mass, or why Catholics are encouraged to assist at the Mass, not only once a week, but even every day. For those who have the faith, the reason is obvious. The world was saved from destruction only because the mercy of God has been appeased by now through thousands of Masses offered every day.

To begin to appreciate the importance of the Catholic priesthood, we must first understand the tragedy of sin from our first parents to the present day. God is a just God. The human race has deserved to be annihilated many times because of its sins. What has appeased the anger of God? What has placated the justice of God? Why has the world been spared over these centuries? The world has been spared the penalty it deserves because God became man, He died on the Cross on Calvary to redeem a sinful mankind. But His death on Calvary has been repeated, and is being repeated every time that Mass is being offered. It is no exaggeration to say that except for the Sacrifice of the Mass, the human race would long ago have been destroyed by an offended God for its countless crimes.

But then we ask the most important question: what makes the Mass possible? The Mass is possible only because Christ’s death on Calvary is literally repeated in every Mass offered on Catholic altars throughout the world. This is not indulging in rhetoric. This is the literal truth! Except for the Mass, the justified anger of God would long ago have wiped out the human race because of its multitude of sins.

How we need the Mass! But there is no Mass without the priesthood. That is why Christ instituted the Sacrament of the priesthood, to ensure that His sacrifice on Calvary would be renewed and repeated in every Mass until the end of time. It is impossible to overestimate the importance of the Mass being offered on thousands of altars every day. Except for the Mass, I repeat, the world would long ago have been destroyed because of its sins.

That is the fundamental meaning of the Sacrifice of the Mass. Its daily oblation throughout the world ensures the appeasement of God’s mercy on a sin-laden world.

Permanent link to this article: https://luisapiccarreta.com/other-category/the-role-of-the-priests/the-priesthood-and-the-holy-sacrifice-of-the-mass/