Respect For The Priesthood 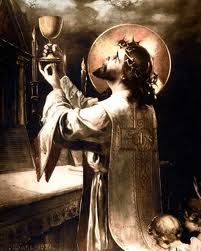 Respect for the Priesthood

But, it is not only the sacrament of Confession but also the sacrament of Anointing of the Sick which removes sins. Through the sacrament of anointing the priesthood can also enable the forgiveness of sins, including grave sins, and thus the removal of the eternal punishment, which we believe is the consequence of mortal sin.

Over the years I have many times helped priests in hospitals, particularly at night. Depending on the hospital, especially in the downtown part of the city, a priest could be in for a very busy evening. I would tell the doctors and nurses, get me up if a person is brought in for a fatal accident or a murder. The busiest night I had was nine D.O.A. in one night. What is a D.O.A.? Dead On Arrival. That night I didn’t sleep. A person can be anointed as long as a soul is still in the body. Just because a person has stopped breathing, does that mean the person is dead? No. Just because a pulse is no longer moving, does that mean the person is dead? No. Up to eight hours after apparent death a person may still be alive. It happened in Chicago, which can be very cold in the winter. A woman was driving late at night. Her car stalled in below zero weather. She stepped out to look at the car, fell over, and never got back into the car. The police found her eight hours after she collapsed because her watch stopped when she broke it falling on the ground. The police had enough sense to take the woman, a virtual cake of ice, to the hospital. No breathing, no pulse moving, no blood circulation. Then in the hospital they slowly thawed her out. Slowly she began to breath again. For an unconscious person who is near death, the Sacrament of Anointing of the sick can, anytime after the person has lost God’s friendship and provided the person at least has the fear of God, remove both the guilt and the punishment due to sin, especially grave sin and eternal punishment. How I would drill this into the priests I was teaching! So, there are two sacraments of forgiveness instituted by Christ besides Baptism, and they are the Sacraments of Confession (or Penance) and Anointing of the Sick.

There is a third level to what we are saying. There are three great gifts Christ gave to His Church through the priesthood – the Holy Eucharist, forgiveness of sins, and authority. Christ founded the Church on the Apostles. We have authority, of course, in that the bishop of the diocese is to be obedient to the bishop of Rome. In his diocese, the bishop has authority to teach the people to tell them what to do and what not to do. He has a right to command. And always the bishop of Rome has supreme authority. However, even a priest, for example in Confession, has authority to direct the people he absolves. After the penitents have confessed their sins, the priest can tell them how they are to live, what they are to do or stop doing. In other words, the authority which Christ bestowed on His Church is vested in the Sacrament of Holy Orders. Having said that, I cannot tell you how important it is to draw from it some practical implications for our lives.

As we have said, without the priesthood we would not have the Holy Eucharist, we would not have forgiveness of sins, and we would have no authority in the Catholic Church. What are some of the implications? We should pray for priests. I cannot begin to tell you, how and I use the word advisedly, how desperately priests need our prayers. And we should sacrifice for priests. In other words, ask our Lord, by prayer and sacrifice to give priests the grace to be faithful to their priesthood. However, that is not all. Priests need encouragement. And the more faithful a priest wants to be to his vowed commitment, and especially if he is not living as a member of a community, the more encouragement he will need. Ask our Lord to enlighten you on how you, in your own way, can help priests to be of service to others. And never for a moment forget that a priest, no matter how he may talk or behave as a priest, still needs respect for his priesthood from the faithful. In fact, there is nothing he needs more.

How are we to assist priests in this area? By using their services. I cannot begin to tell you how important it is for a priest, what shall I say, to be needed. And a priest’s priesthood must be recognized especially by him because his services are needed. When I say that, I am implying as you can estimate, you should not hesitate to make demands on priests. In other words, give them an opportunity to exercise their priesthood. And this is especially to exercise their priesthood in giving counsel.

There is one more large area that I want to share with you regarding the priesthood. There is now as you know in the Church, and this is a safe term, a crisis. And the crisis, especially, is a crisis in the priesthood. I know. As I have said before in all my years in working for the Holy See, especially for the Congregation for the Clergy, I have come to believe that we might say and we should say, that the priest is one who’s to give us the guidance and direction we need. And pray that priests will give you that kind of guidance and direction. And I know what I am talking about. We must know our own faith, especially the Church’s moral teaching so well that, when necessary, we can help priests so that they will give us the right direction. I have seen much more than you can imagine.

Finally, the more we can use the Sacrament of Confession, the more God will bless the priest through you. What priests need, I have taught so many priests, I know them, what priests need is to hear confessions of people who have only venial sins to confess, because, as a priest I can assure you, a priest’s ministry depends on the people to whom he ministers, only in heaven will you know how you have helped priests to live a holy, obedient, humble and chaste life, by your own lives of humility, obedience, and chastity. I trust you will understand the reason why I am saying what I am saying. Women religious who are faithful to their vowed lives are, I hesitate using the word, indispensable for the sanctification of priests. I repeat you have a great deal, much more than you will ever know until you reach heaven, how much the Church needs sisters who are living a faithful, obedient, patient and chaste life. How many priests you have helped over the years, including this priest who is speaking to you.

Permanent link to this article: https://luisapiccarreta.com/other-category/the-role-of-the-priests/respect-for-the-priesthood/