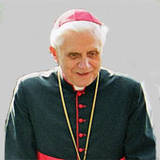 Vatican City,  (VIS) – The Letter to the Philippians which, the Holy Father said, is in some way St. Paul’s “spiritual last will and testament”, was the theme of his catechesis during the general audience, which was held this morning in the Paul VI Hall.
The Apostle of the Gentiles dictated this Letter from jail, when he felt death approaching, yet nonetheless it closes with an invitation to be joyful. Joy, the Holy Father explained, “is a fundamental characteristic of being Christian. … But how can one be joyful in the face of an imminent death sentence? From where, or better from whom, does St. Paul draw his peace of mind and the strength and courage to face martyrdom?”
The answer is to be found in the middle of the Letter to the Philippians, in the so-called “carmen Christo” or “Christological hymn”, which “summarises the Son of God’s divine and human itinerary”. It opens with these words: “Let the same mind be in you that was in Christ Jesus”. This, the Pope said, “means not only following Jesus’ example, … but also involving the whole of our lives in His way of thinking and acting”.
This hymn to Christ begins by saying that He is “‘in the form of God’. Yet Jesus, true God and true man, did not experience this condition … in order to triumph and to impose His supremacy”, but to take “‘the form of a slave’, the human form marked by suffering, poverty and death. He assimilated Himself fully to mankind, except in sin”.
St. Paul continues by outlining the historical context of Jesus’ earthly life, up to the cross where He “experienced the greatest degree of humiliation, because crucifixion was the punishment reserved for slaves, and not for the free”. Yet it is “in the cross of Christ that man is redeemed and Adam’s experience is transformed “. If the first man sought to be like God, “then Jesus, though ‘in the form of God’, lowered Himself and immersed Himself in the human condition, … to redeem the Adam within us and to restore to man the dignity he had lost”.
“Human logic”, Benedict XVI went on, “often seeks realisation in power and domination. … Man still wants to build the Tower of Babel with his own strength, to reach the heights of God, to be like God. The incarnation and the cross remind us that full realisation lies in conforming our human will to that of the Father, in emptying ourselves … of selfishness in order to fill ourselves with the love of God and thus to become truly capable of loving one another”.
The Pope then noted that, in the second part of the Christological hymn, the subject changes: no longer Christ but God the Father. “He Who abased Himself by taking on the form of a slave, is exalted and raised above all things by the Father, Who gives Him the name of ‘Kyrios’, ‘Lord’. … The Jesus Who is exalted is the Jesus of the Last Supper Who … bends to wash the feet of the Apostles. … It is important to remember this always during our prayers and our lives”.
“This hymn in the Letter to the Philippians contains two important indications for our own prayers. The first is the invocation of ‘Lord’ addressed to Jesus Christ Who, … amidst so many ‘dominators’ who seek to rule, remains the one Lord of our lives. … Therefore it is important to maintain a scale of values in which the first place belongs to God”.
“The second indication is prostration, … the ‘bending of every knee in heaven and on earth’, … the adoration that all creatures owe to God. Genuflection before the Blessed Sacrament or kneeling in prayer express the attitude of adoration before God. … When we kneel before the Lord we confess our faith in Him, we recognise that He is the one Lord of our lives”.
“At the beginning of this catechesis we asked ourselves how St. Paul could be joyful when faced with the risk of imminent martyrdom”, the Holy Father concluded. “This was possible only because the Apostle never removed his gaze from Christ”.
Published byVISarchive 02-Wednesday, June 27, 2012

Permanent link to this article: https://luisapiccarreta.com/other-category/the-papacy/the-lord-we-adore-is-he-who-washed-the-apostles-feet-at-the-last-supper-by-pope-benedict-xvi/