Pope Francis: Where There is Culumny, There is Satan Himself 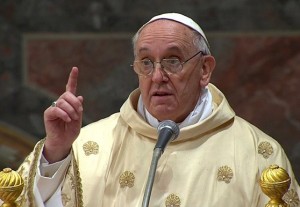 Pope Francis: Where There Is Calumny, There Is Satan Himself!

Pope Francis Continues To Speak On Satan And The Works Of Evil!

By, Edward Penetin – For the third time in as many weeks, Pope Francis has warned not to speak ill of others, and again mentioned the devil in another striking homily this morning in the chapel of the Vatican’s Santa Martha residence.

Calumny, he said, is worse than sin and is the direct expression of Satan. “We are all sinners; all of us. We all commit sins. But calumny is something else. It is of course a sin, too, but it is something more,” he said, according to a Vatican Radio report.

“Calumny aims to destroy the work of God, and calumny comes from a very evil thing: it is born of hatred. And hate is the work of Satan. Calumny destroys the work of God in people, in their souls. Calumny uses lies to get ahead.” Be in no doubt, he said: “Where there is calumny, there is Satan himself.”

He then gave the example of St. Stephen, who was a victim of calumny, wrongly accused of bearing false witness, and was martyred because of it. The Church’s first martyr, the Pope said, does not repay falsehood with falsehood. Instead, he “looks to the Lord and obeys the law”, being in the peace and truth of Christ. It’s the way of martyrdom, he said, and there have been numerous examples of those who have witnessed to the Gospel with great courage.

But he added – and later repeated – that the age of martyrs “is not yet over” and that “even today we can say, in truth, that the Church has more martyrs now than during the first centuries.”

“The Church has many men and women who are maligned through calumny, who are persecuted, who are killed in hatred of Jesus, in hatred of the faith,” the Holy Father continued. “Some are killed because they teach the catechism, others are killed because they wear the cross … Today, in many countries, they are maligned, they are persecuted … they are our brothers and sisters who are suffering today, in this age of the martyrs”.

This age of “such great spiritual turmoil” reminded the Pope of an ancient Russian icon that depicts Our Lady covering the people of God with her mantle: “We pray to Our Lady to protect us, and in times of spiritual turbulence the safest place is under the mantle of Our Lady. She is the mother who takes care of the Church. And in this time of martyrs, she is the protagonist, the protagonist of protection: She is the Mother. (…) Let us state with faith: Mother, the Church is under your protection: Care for the Church.”

This is the third time at these early morning Masses that the Pope has warned against speaking poorly of others. Last month he said it was the equivalent of selling someone “like a commodity,” not unlike Judas, who sold out Jesus for 30 pieces of silver. A few days later, he warned against gossip, saying that complaining behind each other’s backs is a temptation that comes “from the Evil One, who does not want the Spirit to dwell among us and give peace.”

Since his election last month, the Pope has also made frequent references to the devil. Observers have noted this emphasis with interest, especially as explicit mentions of the devil largely fell into disuse in the years following the Second Vatican Council. With his disappearance from Church texts, exorcists complained that the rite of exorcism had become useless against demons.

Pope Francis’s frequent allusions to “Satan” and the “Evil One” may well be part of an effort —one that Benedict XVI had already begun — to cast out the presence of evil and so bring back healing and harmony to the Church, and to parts of the Vatican in particular.

Permanent link to this article: https://luisapiccarreta.com/other-category/the-papacy/pope-francis-where-there-is-culumny-there-is-satan-himself/