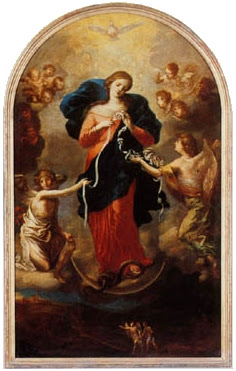 Our new Pope Francis has a very special devotion to Our Lady Untier of Knots. Many have never heard of this devotion, but it’s a great one…going all the way back to the second century.

Before describing “Our Lady Untier of Knots,” I’d like to share a recent experience from my own life as it relates to this special Marian devotion:
Recently at Fisher More College, during the offertory of our High Mass for the feast of Saint Thomas Aquinas, a student tapped me on the shoulder, “Dr. Marshall, you’re needed in the courtyard.” I was a bit puzzled, but I followed the student outside.
Outside in the courtyard, I saw one of the altar servers handing a hot thurible and the chains were tangled and knotted. The priest was about to incense the altar, and in its current condition, the thurible would not close. It was a jangled up mess. Apparently, the base of the thurible had flipped over a few times and the chains were wound up around each other. If you have handled a thurible, you may have experienced this before.
We literally had 45 seconds until the priest needed the thurible at the altar. I prayed, “Our Lady, Untier of Knots, pray for us.” And like magic I tumbled around the base of the thurible about three times. Aha! It was straight again. The altar server used his bare hands to put the coals in the thurible (he was in a hurry, after all) and he darted inside to the altar…just in time.
So what is meant by the title Our Lady Untier of Knots?
Pope Francis’s Devotion to ‘Our Lady Untier of Knots’
Our new Pope Francis has been one of the chief promoters of “Our Lady Untier of Knots.” When Pope Francis, then Jorge Mario Bergoglio, was studying in Germany, he was stunned by a Bavarian painting of “Holy Mary, Our Lady Untier of Knots.” He acquired a copy of the painting and brought it to Argentina and promoted devotion to Mary under this title. Apparently it has caught on with the faithful of Argentina.
It is interesting that this Marian devotion of Pope Francis is rooted in Bavaria – it therefore creates a bridge between the Pontificate of Pope Benedict XVI and that of Pope Francis. In fact, Cardinal Bergoglio had an image of Our Lady Untier of Knots engraved into a chalice and presented it to Pope Benedict XVI.
The Theology of Our Lady Untier of Knots
The theology of Mary untying knots goes back to the second century – less than one hundred years after the death of the Apostles. Saint Irenaeus of Lyons wrote “the knot of Eve’s disobedience was loosed by the obedience of Mary. For what the virgin Eve had bound fast through unbelief, this did the virgin Mary set free through faith.” (Adversus haereses, 3, 22) This is one of the earliest examples of describing Mary as the “New Eve.” Eve, standing next to Adam, is the “co-peccatrix” (co-sinner) Mary, standing next to Christ crucified, is the “co-redemptrix” (co-redemptress). This does not mean that Mary directly saves or redeems us. It means that Mary consents and participates in the redemptive action of Christ. Her role is congruent and relative to the condign and absolute role of Christ.
Our Lady Untier of Knots is Patristic and may be the way forward for establishing and expanding Marian theology. The doctrine of Mary’s universal mediation and her subordinate role to Christ in human salvation is beautifully summed up in this saying of Saint Irenaeus of Lyons. The fact that it goes back to the second century reveals that this is not a medieval accretion. It’s a doctrine deriving from the Apostles themselves.

Permanent link to this article: https://luisapiccarreta.com/other-category/the-papacy/pope-francis-and-mary-our-blessed-mother/pope-francis-favorite-marian-image/