St. Joseph, Model Of The Role and Responsibility Of Fatherhood 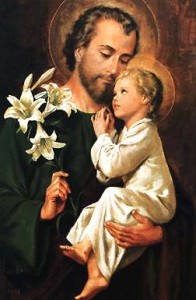 The Role and Responsibility of Fatherhood – St. Joseph as Model

If there was one fact of our Christian faith which needs to be stressed today it is the need for a father in the family. At the center of the social revolution today is the attack on men, as husbands and fathers of families. Behind this revolution is the philosophy of Karl Marx. According to Marx, families are the invention of dictating males who created, what we call the family, in order to dominate women in human society.

The result has been disastrous. Most of the laboring force in America is women. Feminism is an epidemic that our popes tell us will destroy family life. Abortions are only the most tragic consequence of this plague.

I thought this introduction was worth making before we begin our conference on, “The Role and Responsibility of Fatherhood, St. Joseph as Model.”

Men as Husbands and Fathers

Within the family community, the man is called upon to live his gift and role as husband and father.

In his wife, he is to see the fulfillment of God’s intention, as expressed in the first book of the Bible, “It is not good that the man should be alone; I will make him a helper fit for him.” The Lord makes His own the cry of Adam, the first husband; “This at last is bone of my bones and flesh of my flesh.”

At the dawn of creation, God made the human race as two genders, men and women. He told them to increase and multiply. He promised them a Redeemer after they had sinned. He assured them of His blessings, provided they responded to His divine will.

With the coming of Christ marriage was elevated beyond anything known before in human history. He restored marriage to its condition before the fall of our first parents. He told the Pharisees that a man may not put away his wife. Even if she is unfaithful, he cannot remarry.

Our present Holy Father could not be clearer on the quality of love that a husband should have for his wife.

Authentic conjugal love presupposes and requires that a man have a profound respect for the equal dignity of his wife: “You are not her master,” writes St. Ambrose, “But her husband; she was not given to you to be your slave, but your wife … reciprocate your attentiveness to you, and be grateful to her for her love.” With his wife, a man should live, “A very special form of personal friendship.” As a Christian, he is called upon to develop a higher form of love, showing his wife a charity that is both gentle and strong like that which Christ has for the Church” (Familiaris Consortio, 25).

But that is only the beginning. The husband is to love his wife as mother of their children and love the children themselves. This love belongs to the very essence of fatherhood.

In countries like our own, fathers are encouraged to be less concerned with their family and less involved in the education of the children. Here the Church’s highest authority tells us that fathers must restore what is God’s revealed command: the role of the father in the family is of unique and irreplaceable importance. In this context, I think it is important to quote the exact words of Pope John Paul II.

“As experience teaches, the absence of the father causes psychological and moral imbalance and notable difficulties in family relationships. In contrary circumstances, the oppressive presence of a father, where there still prevails the phenomenon of machismo, or a wrong superiority of male prerogatives which humiliates women and inhibits the development of healthy family relationships (Familiaris Consortio, 25).

Christ tells his married followers that they are to reveal and relive on earth the very fatherhood of God. On these premises, a man is called to ensure the harmonious and united development of all the members of his family. He will perform this responsibility by exercising generous, even heroic charity, for the life conceived under the heart of the mother. He must be deeply concerned for the education of his children. He must share with his wife the duty of training these children in the knowledge of their faith and their love for God. With God’s grace, he must do everything possible to avoid division, and foster unity and stability in the family. With his wife, he is to be a channel of grace to his children, whom they have brought into this world in order to reach their heavenly destiny.

In the litany of St. Joseph, we say, “St. Joseph, Head of the Holy Family, pray for us.” There is more hidden behind this invocation than meets the eye.

We know, of course, that Mary is the Virgin Mother of Jesus Christ. We know that the Savior was not conceived of a human father. Yet the Church has never tired insisting on the fatherhood of St. Joseph in the Holy Family.

It is crucially important to understand that there are two levels to fatherhood. There is the physical level of providing for the conception of a human body. In this sense, Christ did not have a human father.

From all eternity, Joseph was destined to be the spouse of the Blessed Virgin. They were truly married. Joseph was Mary’s husband, and she was his wife.

Marriage is the most intimate of all unions between two human beings. It imparts a community of gifts between those joined together in matrimony. Consequently, in giving Joseph the Blessed Virgin as his spouse, God appointed him to be not only her life’s companion, but also the witness of her virginity, the protector of her honor. No, by reason of his conjugal tie to Mary, he participated in her sublime dignity.

We cannot exaggerate the importance of seeing St. Joseph as the true spouse of Mary. Under God, he was to share in her unique role as Mother of the Word made flesh who dwelt among us.

St. Luke tells us that, on returning to Nazareth after Mary and Joseph found the young Christ in the temple, “Jesus advanced in wisdom and age and grace before God and men (Luke 2:52)”.

What are we being told? We are being told that the Christ child constantly manifested greater wisdom as he grew in age. In God’s mysterious providence, both Mary and Joseph contributed to this manifestation of greater wisdom in Jesus.

We return to our main theme: that St. Joseph is the divinely revealed model of human fatherhood. We know only too well that a man can father a child in body without even being married to the mother of his offspring.

How, then, is St. Joseph the exemplar of fatherhood? He is, to coin a word, the prototype of what all human fathers should be. They should reflect, in their families the seven virtues which the Church specially honors in St. Joseph’s relationship to Jesus and Mary.

“St. Joseph, spouse of the Blessed Virgin Mary and foster father of the Son of God, obtain from Jesus the grace we fathers need to raise our families according to the will of God. We need light to recognize our grave responsibility as husbands and fathers. Above all we need the courage to persevere in the fatherly care of our families through time into the endless reaches of eternity. Amen.”

Permanent link to this article: https://luisapiccarreta.com/other-category/saints/st-joseph/st-joseph-model-of-the-role-and-responsibility-of-fatherhood/