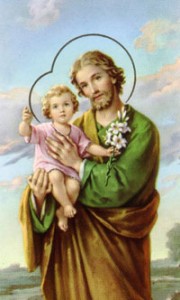 In 1870, Pope Pius IX declared Joseph patron of the universal Church and instituted another feast, with an octave, to be held in his honour on Wednesday in the second week after Easter. This was abolished by Pope Pius XII, when in 1955 he established the Feast of “St. Joseph the Worker”, to be celebrated on 1 May. This date counteracts May Day, a union, workers and socialists holiday and reflects Joseph’s status as what many Catholics and other Christians consider the “patron of workers” and “model of workers.” Catholic and other Christian teachings and stories about or relating to Joseph and the Holy Family frequently stress his patience, persistence, and hard work as admirable qualities which believers should adopt.

Pope John XXIII added the name of Joseph to the Canon of the Mass. The 19 March feast is a solemnity and is transferred to another date if impeded (for instance, if it falls on a Sunday within Lent). The 1 May celebration is an optional memorial, and so is omitted if impeded. (However, the 1 May celebration is 1st class in the Tridentine calendar, so in it St. Joseph the Worker was celebrated on 2 May in 2008 because 1 May was Ascension Thursday.)

Permanent link to this article: https://luisapiccarreta.com/other-category/saints/st-joseph/st-joseph-feast-days/