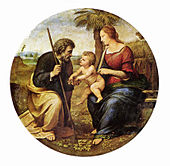 Together with the Blessed Virgin Mary and the Child Jesus Joseph is one of the three members of the Holy Family; since he only appears in the birth narratives of the Gospels, Jesus is depicted as a child when with him. The formal veneration of the Holy Family began in the 17th century by Mgr François de Laval.

Pope Pius IX proclaimed Saint Joseph the patron of the Universal Church in 1870, the unofficial patron against doubt and hesitation, as well as the patron saint of fighting communism, and of a happy death[citation needed]. Having died in the “arms of Jesus and Mary” according to Catholic tradition, he is considered the model of the pious believer who receives grace at the moment of death, and prays especially for families, fathers, expectant mothers (pregnant women), travelers, immigrants, house sellers and buyers, craftsmen, engineers, and working people in general.

The earliest records of a formal devotional following for Saint Joseph date to the year 800 and references to him as nutritor Domini (educator/guardian of the Lord) began to appear in the 9th century, and continued growing to the 14th century.[38][39][40] Saint Thomas Aquinas discussed the necessity of the presence of Saint Joseph in the plan of the Incarnation for if Mary had not been married, the Jews would have stoned her and that in his youth Jesus needed the care and protection of a human father.[41][42]

In the 15th century major steps were taken by Saint Bernardine of Siena, Pierre d’Ailly and Jean Gerson.[38] Gerson wrote Consideration sur Saint Joseph and preached sermons on Saint Joseph at the Council of Constance.[43] In 1889 Pope Leo XIII issued the encyclical Quamquam Pluries in which he urged Catholics to pray to Saint Joseph, as the patron of the Church in view of the challenges facing the Church.[44]

Josephology, the study of the theology of Saint Joseph, is one of the most recent theological disciplines.[45] In 1989, on the occasion of the centenary of Quamquam Pluries Pope John Paul II issued Redemptoris Custos, i.e. Guardian of the Redeemer which presented Saint Joseph’s role in the plan of redemption, as part of the “redemption documents” issued by John Paul II such as Redemptoris Mater to which it refers.[46][47][48][49]

Permanent link to this article: https://luisapiccarreta.com/other-category/saints/st-joseph/sainthood/