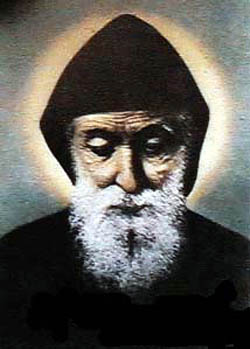 The Saint of today is Sharbel Makhlouf. This great monastic saint is a wonderful patron for the Church of the Middle East. He is one of the wonder workers of the 20th century! Here is the story from CNA:

Yussef Antoun Makhloof –later and forever after known as Sharbel– was of humble birth.

Yet Sharbel belongs to more than his village, monastery, church or country. He belongs to the Universal Church and all Christians. When he was beatified on December 5, 1965, His Holiness Pope Paul VI announced that Saint Sharbel is “a new, eminent member of monastic sanctity [who] through his example and his intercession is enriching the entire Christian people.” (Saint Sharbel: The Hermit of Lebanon 1977: 27)

Yussef, who later took the name Sharbel, was the youngest of five children born to Antoun Zaarour Makhlouf and Brigitta Elias al-Shediyaq. His father died when he was three years old. Like many of the Christians from the Lebanese Mountain, his father had been taken away from his family [by the Turks] and forced into hard labor.

Yussef studied at the parish school and tended the family cow. He spent a great deal of time outdoors in the fields and pastures near his village and he meditated amid the inspiring views of boundless valleys and proud mountains.

From early childhood, Yussef showed that he loved prayer and solitude. In 1851, without informing anyone, he left home. Tanious, his uncle and guardian, wanted Yussef to continue working with him. His mother wanted him to marry the young woman who loved him. (Daher 1952: 18-19; Sfeir 1995: 72-75)

When Yussef became Brother Sharbel, he was filled with determination and walked all the way to his new home, “the monastery,” his new family, “the Lebanese Maronite Order,” and his new bride, “the Church.” He followed in the footsteps of his maternal uncles, who were already hermits at the hermitage of Mar Boula (Saint Paul) in the Holy Valley of Qadisha, across from the Monastery of Our Lady of Qannobine. (Daher 1993:48-49)

The Lebanese Maronite Order of monks is the embodiment of the ancient eastern monasticism, which since early Christian times existed and thrived within widely dispersed, independent monasteries.

At Mass on November 1, 1853, Sharbel took the monastic vows. Neither the monk’s family nor the public were allowed to attend this solemn occasion.

After his ordination, Father Sharbel returned to the Monastery of St. Maron. During his 19 years there, Sharbel performed his priestly ministry and monastic duties in an edifying way. He dedicated himself totally to Christ to live, work and pray in silence.

As he worked the land and performed manual labor at the monastery, he continued a life of purity, obedience and humility that has yet to be surpassed. In 1875, because he showed “supernatural power,” he was granted permission to live as a hermit at the Hermitage of Saints Peter and Paul, which is near the monastery.

It was in this secluded sanctuary that the monk Sharbel spent the remaining twenty-three years of his life practicing severe mortification.

Father Sharbel suffered a stroke on December 16, 1898 while he was reciting the prayer of the Holy Liturgy:

His tomb has been a site for pilgrimages ever since the day he died. Hundreds of miracles were performed through the intercession of Saint Sharbel in ‘Annaya, Lebanon, and throughout the world.

At the closing of the Second Vatican Council, on December 5, 1965, Sharbel was beatified by Pope Paul VI who said: “Great is the gladness in heaven and earth today for the beatification of Sharbel Makhlouf, monk and hermit of the Lebanese Maronite Order. Great is the joy of the East and West for this son of Lebanon, admirable flower of sanctity blooming on the stem of the ancient monastic traditions of the East, and venerated today by the Church of Rome.

Permanent link to this article: https://luisapiccarreta.com/feast-of-st-sharbel/