FROM THE LETTERS OF THE SERVANT OF GOD, LUISA PICCARRETA

Letter # 20 of The Servant of God, Luisa Piccarreta

FEAST OF OUR LADY OF MT. CARMEL 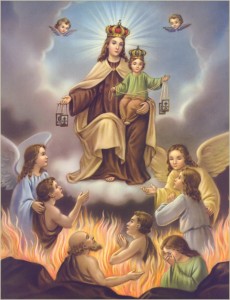 “The Brown Scapular of our Lady of Mount Carmel,” associated with the Carmelite Order, is the most well-known. In A.D. 16 July 1251, Our Lady appeared to St. Simon Stock in Cambridge, England after he prayed for help for his Order. She appeared to him with the scapular and said, “Take, beloved son this scapular of thy order as a badge of my confraternity and for thee and all Carmelites a special sign of grace; whoever dies in this garment, will not suffer everlasting fire. It is the sign of salvation, a safeguard in dangers, a pledge of peace and of the covenant.”  Whether this happened exactly in this way or not (St. Simon’s original descriptions of the vision are not extant and the wording may not be exact), the Scapular was given to St. Simon Stock, and the devotion spread and was well-known by the 16th c. What can be safely believed because of papal decree is the promise known as the “Sabbatine Privilege.” The Sabbatine Privilege is the promise that Our Lady will intercede and pray for those in Purgatory who, in earthly life:

You can be enrolled in the Confraternity of our Lady of Mount Carmel by any priest. Just obtain a scapular, take it to him to have it blessed, and express your desire for enrollment. Warning: Some falsely believe that wearing the Brown Scapular offers some sort of guarantee of salvation because of the legendary words attributed to Our Lady. This is against Church teaching, is superstitious and a grave error. Sacramentals are not magical ways to manipulate God; they are Church-instituted rituals/objects that remind us of what we are supposed to be doing/thinking of, that depend on the faith, hope and love of the user, and which help prepare us to receive God’s saving grace. One must do more than “wear the scapular”; one must wear it worthily.

A critical or skeptical person might say, “Well, that sounds fine in theory, but what proof is there that it actually works that way in practice?” Actually, there are many stories that have been recorded and approved by the Church as worthy of belief that verify the truth of this promise. I will tell you about a few of these cases.

Back in the 1950’s in Ashtabula, a Catholic wearing the Brown Scapular was run over by a train and was cut in two. Yet somehow this man did not die right away, and a priest who was summoned came and heard his confession. The man then died. Apparently this happened because the man, who was wearing the Brown Scapular, needed to be absolved that he might save his soul according to Our Lady’s promise.

There is also a story of a young lady who made it a practice to wear the Brown Scapular, but began living a life of sin. Eventually she despaired of God’s mercy, and decided to kill herself. She threw herself into a river, hoping to drown. God in His Providence, however, because she was still wearing the Brown Scapular, arranged for a fisherman to see her. The man came quickly and tried to help her, but in her despair she refused his help. In the struggle she tore off the scapular and, throwing it away from herself, she then drowned.

In France, a fallen-away Catholic, an officer in the armed forces, had lived a sinful life and lay dying in a hospital. When he became unconscious, one of the attendants placed a Brown Scapular on him. When he regained consciousness and found the scapular around his neck, he cried out, “Why have you put fire on me? It’s burning me! Take it away! Take it away!” At that point he tore it off and soon died. These last two stories from the book Purgatory by Fr. Shouppe show us that if someone wearing the Brown Scapular at the hour of death is not repentant of mortal sin and not willing to cooperate with grace to be truly sorry for mortal sin, God, through the prayers of the Blessed Virgin Mary, will make sure that somehow the scapular is removed before that person dies.

Many Catholics, even among those who wear the Brown Scapular, are not aware of the second part of the Blessed Virgin Mary’s promise, namely that the scapular will be “a safeguard in danger.” Apparently the dangers referred to are not only those of a spiritual nature, but temporal or physical as well. Again, let us look at a few examples that illustrate this.

In the 1950’s in Germany a fire broke out in a residential neighborhood. One house after another caught on fire, to the point that within five hours 22 homes had burned to the ground. Only one remained untouched. Why? Because when the fire was approaching a member of that household took a Brown Scapular and fastened it to the front door of the house. The fire literally went around this house. People were amazed to see this one house standing untouched while 22 others around it were reduced to smoking rubble.

In 1845 an English ship crossing the Atlantic Ocean was on the point of being sunk by a hurricane. A young Irishman on board, upon seeing the danger the ship was in, took off his Brown Scapular and threw it into the huge waves. Immediately the wind ceased and the waves became calm. Another wave washed the Brown Scapular back onto the deck. A Protestant minister and his wife who were present asked the young man what it was that he threw into the ocean. This was the beginning of their conversion to the Catholic Faith.

There is another account of a priest who was offering Mass when a maniac with a gun came into the church and shot at him. The priest continued offering Mass, and everyone assumed the man had missed. After Mass, when the priest took off his vestments, he found the bullet embedded in his Brown Scapular. Finally, in the area of spiritual dangers, a holy Frenchman named Francis Ypes — in fact he is called Venerable by the Church — one day dropped his scapular. The devil appeared to him howling, saying “Take it off! Take off the habit which snatches so many souls from us!” The devil then admitted that there were three things he feared: the Holy Name of Jesus, the Holy Name of Mary, and the Brown Scapular.

I hope that this information and these examples will motivate you to wear the Brown Scapular if you do not already do so. And if you do wear it, I hope that it will motivate you to wear it with greater trust and confidence and dependence upon the Blessed Virgin Mary, your spiritual Mother. If you faithfully wear the Brown Scapular throughout life and at the hour of death, you will understand more clearly why we address the Blessed Virgin in the Salve Regina with these words: “Hail Holy Queen, Mother of Mercy! Hail our life, our sweetness, and our hope! Turn then thine eyes of mercy towards us, and after this our exile show unto us the fruit of thy womb, Jesus.”

Permanent link to this article: https://luisapiccarreta.com/feast-of-our-lady-of-mt-carmel/