THOMAS VANDERWOUDE’S STORY OF A FATHER’S SELF SACRIFICING LOVE 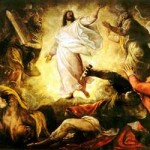 From the Writings ofThe Servant of God Luisa Piccarreta

The Resurrection is the Confirmation of the Fiat Voluntas Tua on earth as It is in Heaven.

From :  The Virgin Mary in the Kingdom of the Divine Will

The Queen of Heaven in the Kingdom of the Divine Will. The Hour of the Triumph. Apparitions of Jesus. The Fugitives cling to the Virgin as the Ark of Salvation and of Forgiveness. Jesus departs for Heaven.

The soul to her Mother Queen:

Admirable Mother, here I come to You again, on your maternal knees, to unite myself with You in the feast and triumph of the Resurrection of our dear Jesus. How beautiful is your appearance today! – all loveliness, all sweetness, all joy. I seem to see You risen together with Jesus. O please! O holy Mama, in so much joy and triumph, do not forget your child! Rather, enclose the seed of the Resurrection of Jesus in my soul, so that, by virtue of It, I may rise again fully in the Divine Will, and live always united with You and with my sweet Jesus.

Lesson of the Queen of Heaven:

Blessed child of my Maternal Heart, great was my joy and my triumph in the Resurrection of my Son; I felt reborn and risen again in Him. All of my sorrows changed into joys and into seas of graces, of light, of love, of forgiveness for creatures, and laid my Maternity over all my children, given to Me by Jesus, with the seal of my sorrows.

Now, listen to Me, dear child. You must know that after the death of my Son I withdrew in the cenacle, together with beloved John and Magdalene. But my Heart was pierced because only John was near Me, and in my sorrow I said: “And the other apostles…where are they?”

But as they heard that Jesus had died, touched by special graces, all moved and weeping, the fugitives drew around Me, one by one, surrounding Me like a crown; and with tears and sighs, they asked for my forgiveness for having so cravenly abandoned their Master, and having run away from Him. I welcomed them maternally in the ark of refuge and salvation of my Heart; I assured them of the forgiveness of my Son, and I encouraged them not to fear. I said to them that their destiny was in my hands, because He had given them all to Me as my children, and I recognized them as such.

Blessed child, you know that I was present at the Resurrection of my Son. But I did not say a word to anyone, waiting for Jesus Himself to manifest Himself as risen, gloriously and triumphantly. The first one to see Him risen was the fortunate Magdalene; then the pious women. All came to Me telling Me that they had seen Jesus risen, and that the sepulcher was empty; and I listened to all, and with an air of triumph I confirmed all in the faith in the Resurrection. By evening, almost all of the apostles had seen Him, and all felt as though triumphant at having been the apostles of Jesus. What change of scene, dear child! – symbol of those who have first let themselves be dominated by the human will, represented by the apostles who run away, abandoning their Master; and their fear and fright is such that they hide, and Peter reaches the point of denying Him. Oh, if they had been dominated by the Divine Will, they would never have run away from their Master, but, courageous and triumphant, would never have departed from His side, and would have felt honored to lay down their lives to defend Him.

Now, dear child, my beloved Son Jesus remained forty days, risen, on earth. Very often He appeared to His apostles and disciples to confirm them in the faith and certainty of His Resurrection; and when He was not with the apostles, He was with His Mama in the cenacle, surrounded by the souls who had come out of Limbo. But as the forty days ended, Jesus instructed the apostles, and leaving His Mama as their guide and Teacher, He promised us the descent of the Holy Spirit. Then, blessing us all, He departed, taking flight for the vault of the heavens, together with that great crowd of people who had come out of Limbo. All those who were there, and they were a great number, saw Him ascend; but as He went up high, a cloud of light removed Him from their sight.

Now, my child, your Mama followed Him into Heaven, and was present at the great feast of the Ascension. More so, since the Celestial Fatherland was not foreign to Me; and then, the feast of my Son, ascended into Heaven, would not have been complete without Me.

Now a little word to you, dearest child. Everything you have heard and admired has been nothing other than the power of the Divine Will operating in Me and in my Son. This is why I so much love to enclose in you the life of the Divine Will – and operating life – because everyone has It, but the majority of them keep It suffocated and in their service. And while It could operate prodigies of sanctity, of grace, and works worthy of Its power, It is forced by the creatures to remain with folded arms, unable to carry out Its power. Therefore, be attentive, and let the Heaven of the Divine Will extend within you and operate, with Its power, whatever It wants and however It wants.

Most holy Mama, your beautiful lessons enrapture me, and – oh, how I wish and sigh for the operating life of the Divine Will in my soul! I too want to be inseparable from my Jesus and from You, my Mama. But to be sure of this, You must take on the commitment to keep my will enclosed in your maternal Heart; and even if You should see that it costs me much, You must never give it to me. Only then will I be certain; otherwise, it will always be words, but I will never do facts. Therefore, your child commends herself to You, and hopes for everything from You.

Today, to honor Me, you will make three genuflections in the act in which my Son ascended into Heaven, and you will pray Him to make you ascend in the Divine Will.

My Mama, with your power, triumph in my soul, and make me be reborn in the Will of God.

Permanent link to this article: https://luisapiccarreta.com/feast-of-easter/