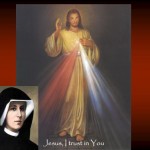 The Feast of Divine Mercy Sunday is prominent worldwide.

On This Feast of Divine Mercy, April 27, The Canonization of Popes John Paul II and John XXIII lend special significance in 2014 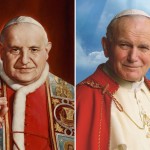 This year the devotion will get more international attention as the canonization Mass for Blessed John XXIII and Blessed John Paul II is scheduled to begin at 10 a.m. April 27. Pilgrims are expected to begin filling St. Peter’s Square early in the morning and will have an opportunity to participate in the recitation of the Divine Mercy chaplet, a series of prayers focusing on the gifts of God’s mercy, especially shown through the passion of Christ. Pope John Paul decided in 2000 to put the devotion on the Church’s universal calendar the Sunday after Easter. Presiding over the first universal observance of Divine Mercy Sunday in 2001, Pope John Paul quoted from his 1980 encyclical “Dives in Misericordia” (“Rich in Mercy”): The cross and resurrection of Christ speak and never cease “to speak of God the Father, who is absolutely faithful to his eternal love for man … believing in this love means believing in mercy.” Meeting in March with priests from the Diocese of Rome, Pope Francis said one of the greatest inspirations of Pope John Paul was his intuition that “this was a time for mercy.” St. Faustina Kowalska is the Polish nun who promoted the Divine Mercy devotion and was canonized by Pope John Paul II in 2000. The devotion began in the late 1930s by St. Faustina, who had a vision of Jesus where he asked for devotions to divine mercy.

Permanent link to this article: https://luisapiccarreta.com/feast-of-divine-mercy/