Feast of the Immaculate Conception

The Test for the Children of the Divine Will

Feast Day of Our Lady of Loreto, Site of the Holy House of Mary

12/10 Feast Day of Our Lady of Loreto, Site of the Holy House of Mary 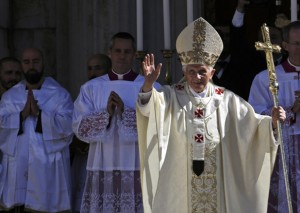 Pope Emeritus Benedict XVI blesses faithful at the end of Mass
In front the Basilica of Loreto, Italy

Pope Emeritus Benedict XVI made a pastoral visit to Loreto on October 4, 2012. The visit was set to coincide with the 50th anniversary of Blessed John XVIII’s visit to the Shrine of the Holy House in the Italian town.

The shrine, a Catholic place of pilgrimage visited by thousands each year, contains the house where the Virgin Mary lived.

Many saints, blesseds, and Popes have visited the house of Loreta. Amongst them were Saint Francis of Sales where he made his vows of celibacy in the Holy House; Saint Therese of Lisieux – before she went to ask the Pope for permission to enter the Carmel at the age of 15, she visited the Holy House; Saint Maximilian Kolbe – in his return to the city of the Immaculata, shortly before being taken to the concentration camp; and many other saints. 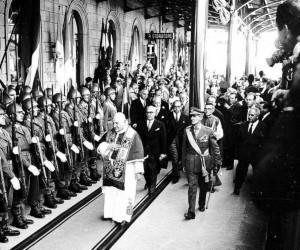 That was the first time in modern times that a Pope left the Vatican. 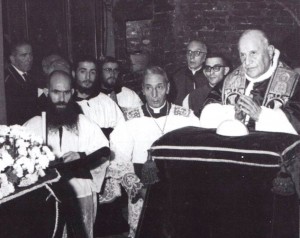 Pope St. John XXIII asked the Virgin of Loreto for the protection of the Council

LORETO, Italy, OCT. 4, 2012 (Zenit.org).- Pope Benedict XVI made a pastoral visit today to the Marian Shrine of Loreto where he entrusted the upcoming Synod of Bishops on the New Evangelization and the Year of Faith to the Blessed Mother. The visit of the Holy Father also commemorates the 50th anniversary of Blessed Pope John XXIII’s visit to the shrine. The late Pope entrusted the Second Vatican Council to the Virgin Mary on the eve of its inauguration.

The shrine, a Catholic place of pilgrimage visited by thousands each year, contains the house where the Virgin Mary lived. Upon arriving via helicopter to Loreto, the Pope met with a community of Capuchin Friars before entering the shrine to pray in front of the Blessed Sacrament.

The highlight of the day was the morning mass at the Piazza della Madonna di Loreto in front of the shrine. In his homily, the Pope reflected on the significance of the house of Mary in Loreto, where the Annunciation and the Incarnation took place. The Holy Father also reminded the faithful of Blessed Pope John XXIII invitation 50 years ago to “reflect on that union of heaven and earth, which is the purpose of the Incarnation and Redemption.”

“This invitation resounds today with particular urgency. In the present crisis affecting not only the economy but also many sectors of society, the Incarnation of the Son of God speaks to us of how important man is to God, and God to man. Without God, man ultimately chooses selfishness over solidarity and love, material things over values, having over being. We must return to God, so that man may return to being man,” the Pope said.

Pope Benedict XVI also said that even in the most difficult of times or moments of crisis, the mystery of the Incarnation provides hope and “that we are never alone, that God has come to humanity and that he accompanies us.”

Contemplating on the Annunciation, the Holy Father underlined the liberty given by God to choose His will freely. “But grace does not eliminate freedom; on the contrary it creates and sustains it. Faith removes nothing from the human creature; rather it permits his full and final realization,” the Holy Father said.

The Pope concluded his homily, entrusting the difficulties affecting the world to the Virgin Mary. Closing with a prayer, the Holy Father commended the upcoming Synod and Year of Faith as well. “Mother of the “yes”, you who heard Jesus, speak to us of him; tell us of your journey, that we may follow him on the path of faith; help us to proclaim him, that each person may welcome him and become the dwelling place of God. Amen,” the Pope said.

Permanent link to this article: https://luisapiccarreta.com/feast-day-of-our-lady-of-loreto-site-of-the-holy-house-of-mary/