FEAST OF THE HOLY TRINITY IN THE DIVINE WILL

Celebration for Father Giuseppe Bernardino Bucci’s 50th Anniversary of His Ordination on March 14, 1964

The quote directly under the picture:

“Jesus was the administrator of the Most Holy Trinity:
He bestowed on people the power, the wisdom, the love of the Divine Persons.
The sacerdotal priesthood, being the continuation of Christ’s priesthood through time, perpetuates His work in souls. “
Servant of God Luisa Piccarreta

The information to the right of the picture:

Loving and powerful Will,
Immense Will from which everything comes out of
and nothing escapes, I come to bring
to your Most Holy feet the love of all.”
Luisa Piccarreta

On the 50th Anniversary
Of his Priestly Ordination 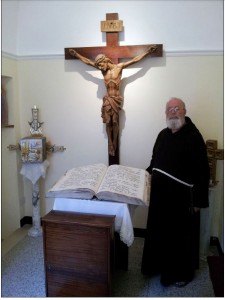 Father Bernardino Giuseppe Bucci was born in Corato on June 15, 1935.   In 1955, he entered the Novitiate of the Capuchin Friars at Alessano, in the Province of Lecce and completed his philosophical studies at the Studentate in Scorrano.

On 14 March 1964, in the Capuchin church of Triggiano, he was ordained a priest by Archbishop Nicodemo of Bari.  You can send him your Birthday and Anniversery greetings to:

Permanent link to this article: https://luisapiccarreta.com/father-giuseppe-bernardino-buccis-50th-anniversay-of-his-ordination-on-march-14-1964/