Feast of the Immaculate Conception

Eve of the Feast of the Immaculate Conception

12/7 Eve of the Feast of the Immaculate Conception: In conceiving, the Virgin conceived the Kingdom of the Fiat; in being born, She gave back to us the rights to possess It. 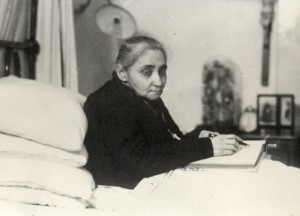 My abandonment in the Fiat is continuous; and while I was following Its acts, my poor mind paused to think about the Conception of the Celestial Queen and Her great fortune of being exempted from original sin.

And my Beloved Jesus, moving in my interior, told me:  “My daughter, the seed with which the Celestial Sovereign was conceived was taken from the human stock, because She too had Her human life as all other creatures, as I too had.  However, there is this great difference, not conceded to any other creature:  before Her beautiful soul was conceived, My Fiat, with Its omnipotence, concentrated Its rays in this seed, and with Its light and heat It annihilated the evil that was in it, and made it die, purifying the seed completely, and rendering it pure and holy, and exempt from original sin; and then, the Immaculate Baby Girl was conceived in this seed.

“So, the whole portent of the Immaculate Conception was operated by My Divine Will.  It did not make another human seed, nor did It destroy it, but It purified it; and with Its heat and light It removed from it all the humors that this seed had contracted from the sin of Adam, and It restored in Her the human seed, just as it had come out of Our creative hands.  Therefore, as the little Virgin Queen was conceived, the Kingdom of My Divine Will was conceived in Her and in the human generations, because in forming and giving surprising graces to one creature, in her We look at the whole humanity of the human family, as if it were one alone.  See, then, as the Virgin was conceived in this seed exempt from every stain—which was all work of the Divine Fiat—Its Divine Kingdom was conceived again within humanity; and as the Immaculate little Virgin was born, the right to be able to possess It was given back.

“Now, when I came upon earth to take on human flesh, I made use of the seed of the Sovereign of Heaven, and it can be said that We worked together to form again this Kingdom of Ours in the human generations.  So, there is nothing left but to know It in order to possess It, and this is why I am manifesting what belongs to My Kingdom and to My Divine Will, so that the creature may cover Its ways, follow Our steps, and take possession of It.  And My Divine Will, with Its light and heat, will repeat the prodigy of removing the bad humors that the human seed possesses; and in order to be sure, It will place the seed of Its light and heat, and will constitute Itself life of that seed.  And so they will exchange possession:  My Divine Will will take possession of the seed in order to form in it Its life of light, of heat and sanctity; and the creature will return to take new possession of the Kingdom of My Divine Fiat.

“See then, My daughter, everything is ready—nothing else is needed but to make It known.  And this is why I so much yearn that what regards My Divine Will become known—to cast into creatures the desire to possess a good so great, so that My Will, drawn by their desires, may concentrate Its luminous rays and, with Its heat, perform the prodigy of giving back the right to possess Its Kingdom of peace, of happiness and of sanctity.” . . .

Permanent link to this article: https://luisapiccarreta.com/eve-of-the-feast-of-the-immaculate-conception/