OUR LADY OF REVELATION 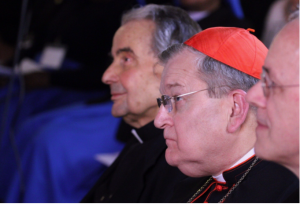 The former prefect of the Apostolic Signatura explains in a new interview how a correction of parts of the Holy Father’s magisterium would be enacted, pays tribute to the recently deceased Cardinal Meisner, and stresses the importance of true mercy.
Edward Pentin

In a new interview, Cardinal Raymond Burke has said it is “now necessary” that a declaration be issued on key areas of Church doctrine that are “not clear” in Pope Francis’ teachings.

The Holy Father will then be “obliged to respond” in order to bring clarification to those teachings, he said.

The cardinal told The Wanderer newspaper Aug. 14 that such a formal act of correction has not been invoked “for several centuries” and until now it has never been used “in a doctrinal way.”

But he said it would be “quite simple” and involve presenting on the one hand the “clear teaching of the Church” and on the other “what is actually being taught by the Roman Pontiff.” The teaching in question in particular relates to doctrinal matters published in the Pope’s 2016 apostolic exhortation, Amoris laetitia.

“If there is a contradiction, the Roman Pontiff is called to conform his own teaching in obedience to Christ and the Magisterium of the Church,” the cardinal explained, adding that a “formal declaration” would be submitted to the Holy Father to which he would be “obliged to respond.”

The cardinal stressed that the dubia, five questions which he and three other cardinals (Cardinals Carlo Caffarra, Walter Brandmüller and Joachim Meisner) issued nearly a year ago, aimed to give the Holy Father the occasion to clarify these aspects of Church teaching.

They were issued in a “very respectful way and not in any way aggressive,” he said, but as the Pope has “chosen not to respond” to them, “so it is now necessary simply to state what the Church teaches about marriage, the family, acts that are intrinsically evil, and so forth.”

“These are the points that are not clear in the current teachings of the Roman Pontiff; therefore, this situation must be corrected. The correction would then direct itself principally to those doctrinal points,” he said.

The cardinal, a former prefect of the Apostolic Signatura, the Church’s highest court, did not give a timeframe for the correction, but hinted at its urgency by stressing that the Church is “being torn asunder right now by confusion and division” and that unity is at stake.

“The Holy Father must be called on to exercise his office to put an end to this,” he said.

Cardinal Burke first suggested a possible formal correction of the Pope in an interview with the Register last November, saying it is “clearly quite rare” but if there was no response, then it would be a “question of taking a formal act of correction of a serious error.” He spoke then of “tremendous division” that is “not the way of the Church.”

In his latest interview, he said he finds the situation “has only worsened” and pointed to groups of lay faithful, priests and bishops he has met who are “practically in desperation” over what is happening.

Any fraternal correction is expected to be undertaken in the first place in camera caritatis, in other words, not in public, according to Cardinal Brandmüller.

In his interview with The Wanderer, the cardinal warned of the danger of schism if universal doctrinal discipline is not restored, but reiterated his firm opposition to that ever happening. “A schism can never be correct,” he said, adding that what is happening is a situation of apostasy that the Blessed Mother warned about in her Message of Fatima.

“There can be apostasy within the Church and this, in fact, is what is going on,” he said. “In connection with the apostasy, Our Lady also referred to the failure of pastors to bring the Church to unity.”

In a speech last month, Cardinal Burke observed that disorientation and error had entered into the Church “in a diabolical way,” but encouraged the faithful to remain steadfast in the faith as well as courageous and serene, knowing Christ’s victory is “already written.”

In his latest interview, the cardinal also praised Cardinal Joachim Meisner, the archbishop emeritus of Cologne and one of the four cardinals to sign the dubia, saying he had a “profound sense of the Catholic Faith” and always “supported and encouraged” those who defended the Church’s “constant teaching and practice.”

“He was a wonderful pastor,” Cardinal Burke said, who never criticized those who supported the Church’s teaching as “legalists” who “do not care about people” and were “throwing stones” at others. “He was a very loving pastor who understood that a good shepherd of the flock must teach the truth to the faithful in its entirety.”

The cardinal also confirmed the existence of a commission to examine Bl. Paul VI’s encyclical Humanae vitae and warned that if the Church’s infallible teaching on contraception (that it “is intrinsically disordered, that to separate the unitive and procreative aspects of the marital act is always and everywhere wrong”) is not upheld, it would “be an opening to all kinds of immoral activity involving our sexual faculties while people would justify sinful genital acts.”

He also stressed the importance of “discriminating mercy” which “distinguishes the sin from the sinner.”

“An expression of love toward the sinner makes it very clear that the sin he or she is committing is absolutely repulsive and must be stopped. Yet, the tendency is to respond with a false sense of mercy,” the cardinal said.

Permanent link to this article: https://luisapiccarreta.com/cardinal-burke-outlines-formal-correction-of-pope-francis-teaching/