Return to THE SERVANT OF GOD LUISA PICCARRETA

Luisa and St. Francis of Paola 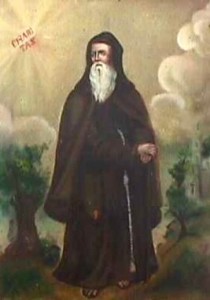 PASSAGES ON ST. FRANCIS OF PAOLA FROM THE BOOK OF
HEAVEN

Our Lord Jesus Christ to the Servant of God, Luisa
Piccarreta, The Little Daughter of the Divine Will

The Divine Will is continuous communion. How to know whether a state is Will of God.

I was concerned because I was not able to receive Communion every day, and good Jesus, on coming, told me: “My daughter(Luisa), I do not want you(Luisa) to be bothered by anything. It is true that having Communion is a great thing, but how long does the tight union with the soul last? A quarter of an hour at the most. But the thing you should cherish the most is the complete undoing of your will in Mine, because for one who lives of my Will, there is tight union not only for a quarter of an hour, but always – always. My Will is continuous communion with the soul; so, not once a day, but every hour and every moment is always communion for one who does my Will.”

I have gone through most bitter days because of the privation of my highest and only Good, thinking and fearing that my state might be a pretense. Being in bed without movement or occupation until the coming of the confessor – and without that usual doziness – tormented me and martyred me so much, to the extent of making me fall ill for the pain and the continuous tears. More than once I begged the confessor to give me permission and obedience to sit on the bed according to my habit, and do my usual work of ‘tombolo’, if I were not dozy and if Jesus Christ were not pleased to let me share, as victim, in one of the mysteries of His Passion. But he continuously and absolutely prohibited it to me. Rather, he added that this state of mine, although I was deprived of my highest Good, was to be considered as state of victim, because of the violence and the pain of the privation itself and of obedience.

I always obeyed, but the martyrdom of my heart was constantly saying to me: ‘Isn’t this a pretense? Where is your doziness? Where, your state of victim? And what do you suffer of the mysteries of the Passion? Get up, get up, don’t make pretenses! Work, work! Don’t you see that this pretense will lead you to damnation? And you – don’t you tremble? Don’t you think of the terrible judgment of God? Don’t you see that after so many years you have done nothing but dig your own abyss from which you will never get out for eternity?’ Oh God! Who can say the ripping of my heart and the cruel sufferings that tormented my soul, crushing me and throwing me into a sea of pains? But tyrant obedience did not allow me even one atom of my own will. May the Divine Will be done, which disposes this way.

While in the midst of these cruel torments, last night, as I was in my usual state, I found myself surrounded by some people who were saying: “Recite a ‘Pater, Ave, Gloria’ in honor of Saint Francis of Paola, who will bring you some refreshment for your sufferings.” So I recited it; and as I did so, the
Saint appeared, bringing me a little loaf of bread. He gave it to me, saying: “Eat it.”I ate it, and felt all strengthened. Then I said to him: ‘Dear Saint, I would like to tell you something.’ And he, all affability: “Tell me, what would you like to say?”

And I: ‘I fear very much that my state may not be Will of God. Listen: in the first years of this illness, which occurred at intervals, I would feel Our Lord
calling me to become a victim; at the same time I would be caught by internal sufferings and wounds, such that externally it appeared that I was having a fit. Now, I fear that it was my fantasy that produced these evils.’

And the Saint: “The sure sign to know whether a state is Will of God is that the soul is ready to do otherwise, if she knew that the Will of God was no
longer that state.”

Not persuaded, I added: ‘Dear Saint, I have not told you everything. Listen: the first ones were at intervals; then, from the time when Our Lord called me to continuous immolation, it is twenty-one years since I have been always in bed – and who can tell my tribulations? Sometimes it seems that He leaves me, He takes suffering away from me, the only and faithful friend of my state; and I remain crushed without God, and even without the support of suffering… and so, doubts and fears that my state may not be the Will of God.’

And he, all sweetness: “I repeat to you what I have said to you before: if you are ready to do the Will of God, if you knew It, then your state is His Will.’

Now, I very much feel within my soul that if I knew the Will of God with all clarity, I would be ready to follow this Holy Volition at the cost of my life.
So I remained more tranquil. May the Lord be always thanked.

Permanent link to this article: https://luisapiccarreta.com/biographical-notes/passages-on-st-francis-of-paola-from-the-book-of-heaven/