Prayer For the Glorification of The Servant of God LUISA PICCARRETA

Appearance of Our Lady to St. Agnes of Montepulciano 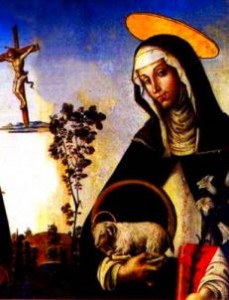 June 18: Appearance of Our Lady to St Agnes of Montepulciano, Italy

Saint Agnes of Montepulciano was born into a noble family in the village of Gracciano, Italy, in about the year 1268. A miracle occurred to demonstrate that she was a predestined soul, for it is recalled that burning torches appeared to illuminate her crib on the day she was born. Agnes was no more than four years old when she began seeking solitude where she could pray privately for many hours to Jesus, whom she already loved.

At the age of nine Saint Agnes told her parents that she desired to enter the Dominican monastery at nearby Montepulciano. Both parents initially opposed Agnes’ wish, so she prayed that God might change their opinions. In a short time she entered the convent and began living under the rule of Saint Augustine. The sisters she lived with soon recognized that Agnes appeared more like an angelic spirit than a human being. She lived an austere life, sleeping on the ground with a stone for a pillow, and fasted on bread and water.

To test Agnes’ holiness and commitment to her prayer life, the sisters gave her difficult duties to perform in the convent. They were greatly edified to see that Agnes regularly completed her duties without complaint, and that she continued with her prayer life and regular acts of charity. In fact, it was about this time that Agnes could be observed absorbed in prayer while seemingly unaware that she was suspended nearly two feet above the ground, or violets, lilies or roses would be found growing up through the stones where Saint Agnes had just prayed.

Several of the residents of the town of Procena built a monastery for their daughters, and naturally desired that Saint Agnes should come with some of her sisters and become the prioress of the new convent. Agnes was only 15 years old, and feared for her humility should she accept the position. Pope Nicholas IV commanded her to accept the office, so she agreed to become the superior of the sisters there.

There are many miracles recorded at this time involving St Agnes of Montepulciano. She frequently multiplied loaves, as Christ did in the gospels, to feed those in need. She had also apparently reached such a level of sanctity that invalids and those afflicted with different types of mental illness would be restored to health just by being brought into her presence.

The Blessed Virgin Mary appeared to Saint Agnes and told her that she would one day found a large monastery based on faith in the Most High and undivided Trinity. She did in fact establish the convent under the Dominican rule, as she had been instructed by an angel, about the year 1300, as the citizens of Montepulciano had built a new convent there, hoping to lure Agnes back to them. She governed there until her death in 1317.

Agnes was known to have experienced several visions during her life. On the night of the Feast of the Assumption, the Blessed Virgin placed the Infant Jesus in her arms. She encouraged Agnes to continue suffering for the love of Christ – she had been sick practically all her life. The Mother of God left with St Agnes of Montepulciano a small cross to comfort and strengthen her. This little cross is still shown with great solemnity to pilgrims, especially during the month of May. Mary likewise vouchsafed Agnes a vision of Christ’s suffering, which lasted three days.

To comfort Agnes, Mary appeared to her on the feast of the Purification while she was at Holy Mass. Mary told her this was the hour she had taken the Child Jesus to offer Him in the Temple. Our Lady smiled sweetly, and gave Agnes her Babe to hold and caress. Saint Agnes was also known to have received Holy Communion from an angel. She experienced repeated levitations, as noted above, and performed miracles for the faithful of the region.

Shortly before her death, Saint Agnes was sent to bathe in springs that were thought to have curative powers. The waters did nothing to help Agnes, though a new spring emerged close by which did indeed have curative power. It was given the name “the Water of Saint Agnes.” While there, the saint prayed over a child who had recently drowned, bringing the child back to life.

St Agnes of Montepulciano then went back to the monastery, where she died on April 20th, 1317, at the age of only 43. Her body was found to be incorrupt, and a mysterious, sweet smelling liquid was observed to stream from both her hands and feet. When Saint Catherine of Siena went to pray before Saint Agnes’ incorrupt body, the deceased saint lifted her foot for Saint Catherine to kiss. She also revealed to Saint Catherine that they would both enjoy the same amount of glory in heaven.

St Agnes of Montepulciano was solemnly canonized by Pope Benedict XIII in 1726. Her feast day is April 20th.

Permanent link to this article: https://luisapiccarreta.com/appearance-of-our-lady-to-st-agnes-of-montepulciano/