8/5 Feast of The Dedication of St. Mary Major in Rome

The foreigner coming in from the country

The fifth outpouring: Jesus sheds blood on the way to Calvary 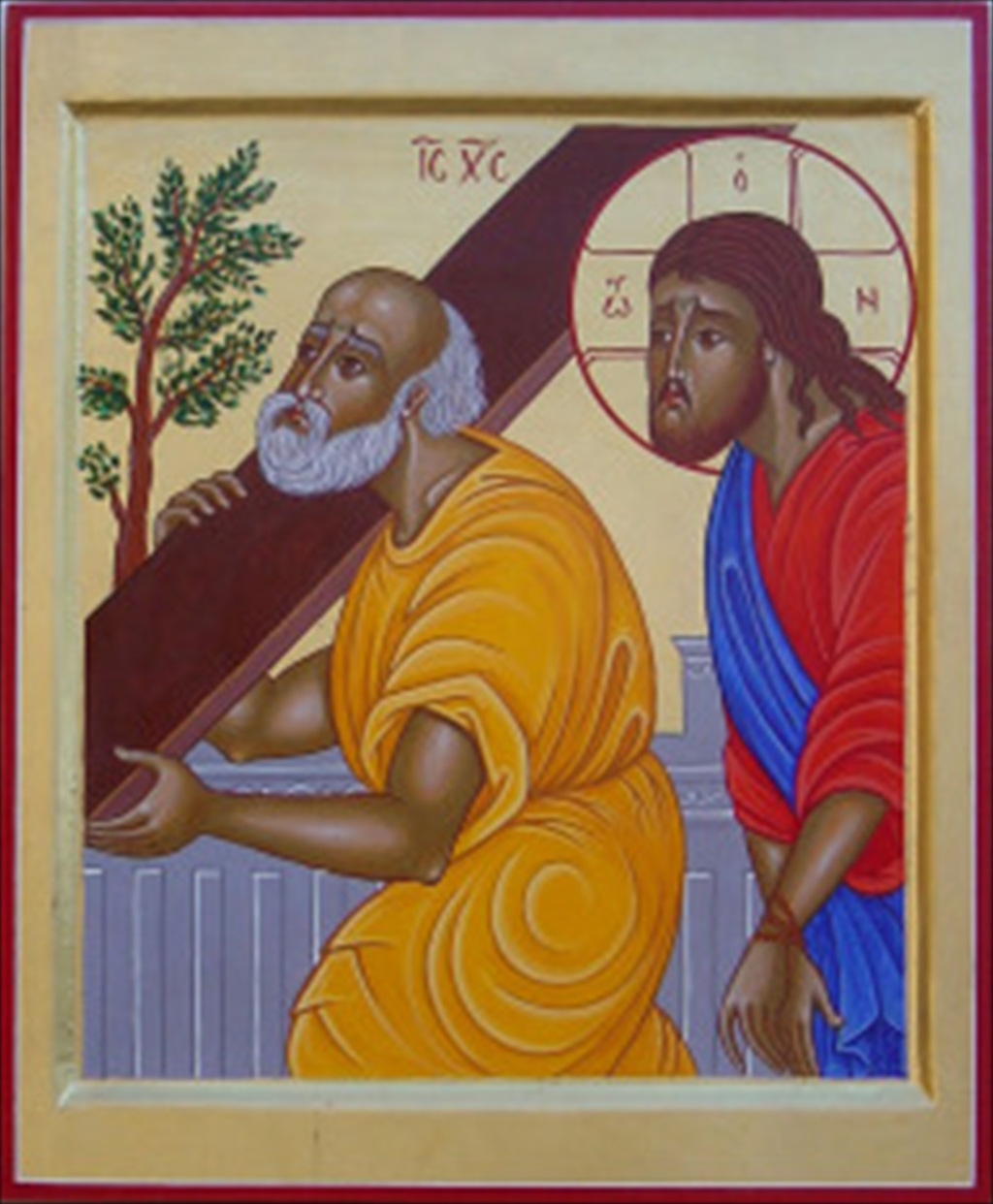 “A certain man from Cyrene, Simon, the father of Alexander and Rufus, was passing by on his way in from the country, and they forced him to carry the cross.  They brought Jesus to the place called Golgotha, which means ‘the place of the skull’”.

It’s time to leave, the charge has been announced, yet no one understood what Jesus was doing. The crowd rejoices satisfied because on a day of celebration the reigning power had given them a gift. The teachers of the Law exult over the victory of their personal justice. The Romans laugh because for them it is becoming a game to see people being led to their death. The soldiers take Jesus by the tunic, they tug at it and push Him. He is brought into the courtyard and there they place a heavy wooden beam on His shoulders.

Jesus’ journey with the cross begins. It seems that others are forcing Him, but no one understands that it is Jesus who freely accepts it. Every wicked act He receives He transforms into an act of love that frees and saves. Jesus takes the cross that crushes his back and opens His wounds and turns it into an instrument of life. Every step along the way to Calvary brings Him closer to His death, while it brings us closer to life. His face and body no longer look as they they did a few hours before. There is nothing in His appearance that could attract the attention of men. As he passes, the people cover their faces. He is mocked and humiliated as something evil that one would wish to flee from. As Jesus walks by the people judge him, the women turn their backs and the soldiers cover Him with insults and beatings. He repeatedly falls and then gets up, growing weaker and weaker.

The way of the cross, Jesus tells Luisa, is a way that is studded with stars, and as one walks this path those stars are changed into brilliant suns. What happiness it will be for the soul to be surrounded by these suns for all eternity! Then, the great reward that Jesus gives to the cross is so much that there is no measure, no width or length; it is almost incomprehensible to the human mind, and that is because in bearing crosses there can be nothing human, instead everything is divine.

The shouts of the people can be heard hundreds of yards away. There is a man, unaware of everything, who is returning to his home, yet his curiousity draws him close to see what is happening. Simon is a man like many others. He leads a normal life. He is returning from work in the country as he does every day and at the same time. He has a family and two sons, Alexander and Rufus. He is a foreigner from Cyrene, a country far away from Jerusalem. He culture is different from that of the Jews; he knows nothing of their laws, his children are not circumcised, he is not waiting for the Messiah and does not rent his garments if there is a man who says he is the Son of God. Simon was not among those who were shouting “Crucify him”, nor was he with the Romans who washed their hands of Jesus and made fun of Him; he isn’t one of the disciples whose traces have been lost since Jesus was captured.

Simon is a common man and as such he cannot help but wonder what the meaning of his life is. Jesus is headed towards death, but is it really the end of everything? For Simon, this had never made any sense. His heart is filled with desires that are too great to be limited by space and time. The yearning of the soul is something that goes beyond the limits of death and that our earthly existence cannot contain.

Simon’s days pass by and this torment wearies and oppresses him. He wonders whether his labors have any logic in themselves, whether family love is the greatest good to be desired, or whether the good of his country could satisfy his desire for the infinite. The infinite – this is what Simon yearns for, like every other man.

The foreigner coming in from the country is unconsolable. The torment haunts him. As he approaches to see what is happening his gaze falls upon Jesus; Simon is appalled. Jesus is the man whom he had heard speak in the streets of Jerusalem just a few days before in the presence of a multitude of people enchanted by His words. He thought that everyone loved Jesus; he knew that just a week before all of Jerusalem had welcomed Him like a king. He, too, was impressed by Jesus’ words. And it was from that day onward that his heart became restless. Jesus’ words had awakened his deepest desires as if they had brought the truth to the surface. Some of the Master’s words in particular would repeat over and over in his head like a broken record: “Come and I will refresh you. Take My yoke upon you and learn from Me, for I am meek and humble of heart, and you will find rest for your souls. For My yoke is easy and My burden is light” (Mt 11:28-30).

Why was Jesus there? The cross is a punishment reserved for the worst offenders. What could He have possibly done? The Cyrene looks at Jesus in awe, not believing his eyes. He is attracted by Jesus’ peace. Jesus’ face is disfigured and His body is covered with wounds, it drips with blood and moans in pain, yet all this ugliness is as if covered with a soft veil. His gaze is serene; there is no hatred toward those who persecute Him, only compassion. Simon sees in Jesus’ eyes the infinite he yearns for and the eternity that he feels is his home. The foreigner coming in from the country, who knows nothing of Jesus, recognizes in Him the meaning of all things.

The violence with which the soldiers force Simon and Jesus to walk with the cross seems to break the unspoken dialogue that was created between the two. Simon senses a strange feeling: he is suffering, but it is not the same suffering as with the other labors. It is an unjust pain, but he feels no resentment; he rather feels a sense of peace and lightness. Now he understands the words of Jesus, the words He spoke to His disciples who have now fled. No one had yet understood the deep meaning of His words, except for this foreigner coming in from the country because he had wanted to all his life. Now, at last, his eyes are lost in those of Jesus and he can walk beside Him.

After a few hundred yards, as if tired of that sadistic game, the soldiers pull Simon away from Jesus, who continues His journey while Simon looks on. Simon resumes his walk home as he had been doing before meeting Jesus along the way to Calvary, but now his heart has changed. His days will continue to unfold as always, between work in the countryside and the hearth, but the way he will live all of this has changed. The heaviest labors will never be the same, and even suffering will take on a new form. Simone understood the value of the cross and has chosen to carry it with Jesus, to continue to walk with Him and to love as He loves – giving his life for those he loves. In every cross of his life, Simon will relive the few steps taken with Jesus and still feel Him close; it will seem like he is continuing his journey to Golgotha with Jesus. Each cross carried together will be an act that completes Jesus’ passion, an act of love that frees and saves. What gives meaning to suffering is being able to live it with Jesus and to participate in His mystery of love. The meaning of life is to love as Jesus loves unto giving up one’s life.

Jesus teaches Luisa how our actions can be continuous encounters with Jesus and serve to lift Him from the weight of carrying the cross. The single intention of a truly loving soul, in all of her actions, is that of encountering the Beloved and of relieving Him from the weight of His cross. And since human life is a continuous flow of acts, both internal and external, all the soul does is engage in continuous encounters with her Beloved. But will the soul just encounter the Beloved? No, no, she will greet and embrace Him; she will kiss, console and love Him and speak a word to Him, even if only fleeting. Then the Beloved will be happy. If the soul’s act serves to meet the sacrifice contained in each one, then the act will be used to relieve Jesus from the weight of His cross. Oh how happy this soul will be, constantly in touch with Jesus as she operates! Love will continue to grow in every encounter.

In another passage (of February 1908), Jesus says that carrying the cross in life, like He and the Cyrenian did, is a burden but in death it is a treasure. It is true that life is a burden, but when this burden is carried with Jesus and when at life’s end the soul finds that she can relieve this burden in Him, this weight is transformed into treasure, where the soul will find the gems, precious stones, diamonds and all the riches to make her happy forever.

O Savior of the world,

may the Blood shed on the way to Calvary

and help us to carry the cross with You,

to behold Your passion within us.

Permanent link to this article: https://luisapiccarreta.com/83-the-fifth-outpouring-jesus-sheds-blood-on-the-way-to-calvary/