7/29 The Novena to God the Father starts today, July 29th 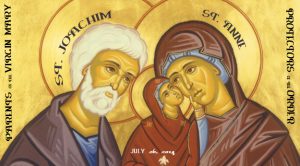 SAINT ANNE was the spouse of St. Joachim, and was chosen by God to be the mother of Mary, His own Blessed Mother on earth. They were both of the royal house of David, and their lives were wholly occupied in prayer and good works. One thing only was wanting to their union—they were childless, and this was held as a bitter misfortune among the Jews. At length, when Anne was an aged woman, Mary was born, the fruit rather of grace than of nature, and the child more of God than of man. With the birth of Mary the aged Anne began a new life : she watched her every movement with reverent tenderness, and felt herself hourly sanctified by the presence of her immaculate child. But she had vowed her daughter to God, to God Mary had consecrated herself again, and to Him Anne gave her back. Mary was three years old when Anne and Joachim led her up the Temple steps, saw her pass by herself into the inner sanctuary, and then saw her no more. Thus was Anne left childless in her lone old age, and deprived of her purest earthly joy just when she needed it most. She humbly adored the Divine Will, and began again to watch and pray, till God called her to unending rest with the Father and the Spouse of Mary in the home of Mary’s Child.

REFLECTION.—St. Anne is glorious among the Saints, not only as the mother of Mary, but because she gave Mary to God. Learn from her to reverence a divine vocation as the highest privilege, and to sacrifice every natural tie, however holy, at the call of God. 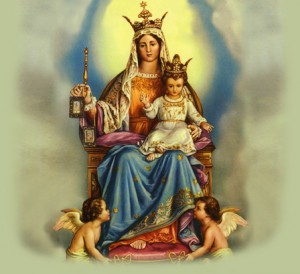 Day Fifteen The Queen of Heaven in the Kingdom of the Divine Will.

On the same Topic: Her Life in the Temple.

The soul to the Queen of Heaven:

Queen Mama, here I am; your child is at your side to follow your steps as You enter the temple. Oh, how I wish my Mama would take my little soul and enclose it in the living temple of the Will of God, isolating me from everyone, except my Jesus and Her sweet company.

Lesson of the Queen of Heaven:

My dearest child, how sweet is your whispering to my ears – hearing you say that you want to be enclosed in the living temple of the Divine Will, and that you want no other company but that of your Jesus and mine. Ah, dear child, you make the joys of a true Mother arise in my maternal Heart! If you let Me do it, I am certain that my child will be happy, and my joys will be hers; and to have a happy child is the greatest happiness and glory of a maternal heart.

Now listen to Me, my child; I arrived at the Temple only to live of Divine Will. My holy parents delivered Me to the superiors of the temple, consecrating Me to the Lord; and while they were doing so, I was dressed up in a festal manner, and hymns and prophecies were sung, which regarded the future Messiah. Oh, how my Heart rejoiced!

Afterwards, with courage, I said good-bye to my dear and holy parents; I kissed their right hands, and I thanked them for the care they took of my childhood, and for having consecrated Me to the Lord with so much love and sacrifice. My peaceful presence, without crying and courageous, infused so much courage in them, that they had the strength to leave Me and to depart from Me. The Divine Will ruled over Me and extended Its Kingdom in all of these acts of mine. Oh, power of the Fiat –You alone could give Me the heroism to separate myself from those who loved Me so much, even though I was so little and I saw that they felt their hearts break in separating themselves from Me!

Now, my child, listen to Me: I enclosed myself in the temple; the Lord wanted it so, that I might lay the Kingdom of the Divine Will in the acts which I was to do in it, so as to let Me prepare the ground with my human acts, as well as the heaven of the Divine Will which was to be formed over this ground, for all souls consecrated to the Lord. I was most attentive to all the duties which were normally done in that holy place. I was peaceful with everyone, nor did I ever cause any bitterness or bother to anyone. I submitted myself to the most humble tasks; I found difficulty in nothing, either in sweeping or in doing the dishes. Any sacrifice was an honor – a triumph for Me. But do you want to know why? I looked at nothing – everything was Will of God for Me. So, the little bell that called Me was the Fiat; I would hear the mysterious sound of the Divine Will which called Me in the sound of the little bell, and my Heart would rejoice and run to go wherever the Fiat was calling Me. My rule was the Divine Will, and I saw my superiors as the ones who imparted the commands of a Will so holy. So, for Me, the little bell, the rule, the superiors, and my actions, even the most humble ones, were joys and feasts which the Divine Fiat prepared for Me; and extending Itself also outside of Me, It called Me to extend Its Will in order to form Its Kingdom in the smallest of my acts. And I acted like the sea, which hides everything it possesses, and lets nothing but water be seen. So I did: I hid everything in the immense sea of the Divine Fiat; I could see nothing but seas of Divine Will, and so all things brought Me joys and feasts. Ah, my child, you and all souls ran within my acts! I could do nothing without my child; it was precisely for my children that I prepared the Kingdom of the Divine Will.

Ah, if all the souls consecrated to the Lord in holy places would make everything disappear in the Divine Will, how happy they would be, converting communities into many celestial families, and populating the earth with many holy souls! But, alas! – with the sorrow of a Mother, I must say: how many bitternesses, disturbances and discords are not there? – while sanctity is not in the office given to them, but in doing the Divine Will, in whatever office which may be entrusted to them. The Divine Will is the peacemaker of souls, the strength and support in the hardest sacrifices.

O holy Mama, how beautiful are your lessons! How sweetly they descend into my heart! O please! I ask You to extend the sea of the Divine Fiat within me, and to raise it around me like a wall, so that your child may see and know nothing but Divine Will – in such a way that, journeying always through It, I may know Its secrets, Its joys and Its happiness.

Today, to honor Me, you will do twelve acts of love for Me, to honor the twelve years which I spent in the temple, asking Me to admit you to the union with my acts.

Queen Mama, enclose me in the sacred temple of the Will of God.

Permanent link to this article: https://luisapiccarreta.com/726-feast-of-st-joachim-and-st-anne/