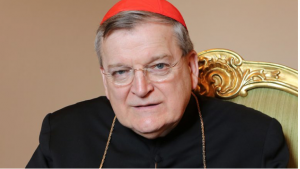 This is the official endorsement of “Novena for Our Nation” by His Eminence, Cardinal Raymond Burke:

“There is no doubt that our beloved nation is in one of the worst crises which it has ever experienced, a profound moral crisis which generates division on all levels and results in an ever-greater more pervasive violence and killing. For Roman Catholics, who have always been known for their faith-filled patriotism, the first response to this crisis is fervent prayer and, in particular, prayer through the intercession of Our Lady of the Holy Rosary, Mary Immaculate who is also the patroness of our nation.

One of the most powerful prayers which is ours in the Church is, in fact, the Holy Rosary. I think, for instance, of the Battle of Lepanto and the victory which was won on October 7, 1571, over the Saracens who were bent on conquering Christian Europe. Let us now turn to the powerful prayer of the Holy Rosary, asking Mary Immaculate to intercede with Our Lord to bring healing to our nation and to inspire in her citizens the holiness of life which alone can transform our nation.

I wholeheartedly endorse the Novena for Our Nation (Starting August 15) and the Rosary Rally on October 7th next, the 445th anniversary of the Battle of Lepanto. I urge as many as are able to participate in these great spiritual works for the sake of our entire nation. In a special way, as the spiritual advisor to the Holy League, I urge all members of the Holy League to give strong leadership in this great campaign of prayer for our nation.”

This is a nationwide prayer campaign called the “Novena for Our Nation.” Everyone from around the nation is encouraged to join ranks as, united, we pray the very powerful 54 Day Rosary Novena from the Feast of the Assumption on August 15 to the Feast of Our Lady of the Rosary on October 7.

Permanent link to this article: https://luisapiccarreta.com/720-cardinal-burke-calls-our-nation-to-pray-54-day-rosary-novens/