“And You, Sovereign Queen, hide me under Your mantle.
Keep me defended from everything; never leave me alone,
so that I can complete the Divine Will in everything.”
Book of Heaven; Volume 32; 3/12/33

Mount Carmel is mentioned in the Bible in 1 Kings 18:16-40. It was there that the prophet Elijah took his stand against the pagan prophets of Baal and Asherah. He revealed to them all the power of Our Lord and God.  During the 12th Century, the Carmelite Order was founded on Mount Carmel.

Today being July 16
the Church honors the Blessed Virgin Mary
under the title of
Our Lady of Mt. Carmel

We remember her appearance to St. Simon Stock, the superior general of the Carmelites, in Cambridge, England, on Sunday, 16 July, 1251. St. Simon Stock had appealed to Mary through prayer to help the new Carmelite order to overcome oppression. She appeared with the Brown Scapular and said to him:

“Take, beloved son, this scapular of the order as a badge of my confraternity and for you and all Carmelites a special sign of grace; whoever dies in this garment, will not suffer everlasting fire. It is the sign of salvation, a safeguard in dangers, a pledge of peace and of the covenant”.

Two great founders of the Religious Orders, St. Alphonsus, of the Redemptorists and St. John Bosco of the Salecians had a very special devotion to Our Lady of Mount Carmel and both wore Her Brown Scapular. When they died each was buried in priestly vestments and Scapular. Many years later their graves were opened, the bodies and sacred vestments in which they were buried were decayed-dust! BUT THE BROWN SCAPULAR WHICH EACH WAS WEARING WAS INTACT. The Scapular of St. Alphonsus is on exhibit in his Monastery in Rome.

On day St. Simon Stock was called promptly by Lord Peter of Linton: “Come quickly, Father, my brother is dying in despair!” St. Simon Stock placed his large Scapular over the dying man and prayed that Mary would keep her promise. The man instantly repented of his sins and died in a state of grace.

Blessed Pope Gregory X was buried wearing the Scapular, only 25 years after the vision. When his tomb was opened over 600 years later, the wool scapular remained perfectly intact and had not degraded in the least.

Every single baptized Catholic in the world can be enrolled in the Confraternity of the Brown Scapular and be able to wear the brown Scapular. If you would like to be enrolled, just ask a priest. The prayer he says to enroll a person is very short.

By the wearing of the Brown Scapular, Mary promises to pray for us at the hour of death. And more than that – intercede with God to obtain the graces we need to remain in the state of grace. And if we are in a state of mortal sin, she will intercede for us that sanctifying grace may come back into our soul before we die. Mary also promises that the Scapular will be “a safeguard in danger.” Those are the two promises by Mary for those that wear the Scapular.

Now, does Mary’s promise (Whoever dies wearing this scapular shall not suffer eternal fire) allow us to live a sinful lifestyle and go to Heaven? No! One who wears the scapular must be in the state of grace, live their lives according to their vocation, pray the rosary, and try to live a holy life. This must not be viewed as magical or a superstition.

Once a man that lived a horribly sinful lifestyle that also wore the Brown Scapular. He hated everything holy and thought that just because he wore the Scapular, without a conversion of heart, that he would enter Heaven. Now the time of his death came, and his scapular began to glow red and burn his skin. It became so intense that he had to remove the Scapular. He then died. 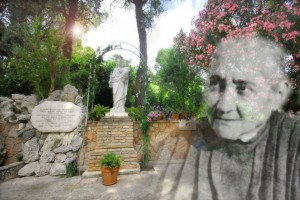 Book of Heaven; 6/6/35 – Vol. 33
The Queen of Heaven goes around through all the nations
in order to place Her children in safety.

…  So after this I (Luisa) continued to think about the Divine Will, and I prayed that It would hurry and that with Its Omnipotence that can do everything, It would conquer all the obstacles and would make His Kingdom come and that His Will would Reign on earth as It does in Heaven.  But while I thought this, before my mind, my sweet Jesus made seen so many mournful and horrifying things, before which the hardest hearts are shaken, and the most obstinate knocked down.  Everything was terror and fright.  I remained so afflicted as to feel myself dying, and I prayed that He would spare so many scourges.

And my beloved Jesus, as if He would have pity on my affliction, told me:  “My daughter, courage, everything will serve for the Triumph of My Will.  If I strike, it is because I want to heal.  My Love is so much, that when I cannot conquer by way of Love and of Graces, I seek to conquer by way of terror and fright.  The human weakness is so much that many times he does not care about My Graces, he is deaf to My Voice, he laughs at My Love.  But it is enough to touch his skin, to remove the things necessary to natural life, that it abases his haughtiness.  He feels so humiliated that he makes himself a rag, and I do what I want with him.  Especially if they do not have a perfidious and obstinate will, one chastisement is enough—to see himself at the brink of the grave—that he returns to Me into My arms.

“You must know that I (Our Lord Jesus Christ) always Love My children, My beloved creatures.  I would eviscerate Myself in order to not see them stricken, so much so that in the mournful times that will come, I have placed them all into the hands of My Celestial Mama.  I have entrusted them to Her, so that She keeps them secure for Me under Her mantle.  I will give to Her all those that She will want, death itself will not have power over those who will be in the custody of My Mama.”

Now while He said this, my dear Jesus made me see with deeds that the Sovereign Queen descended from Heaven with an indescribable Majesty and a Tenderness all Maternal, and She went around in the midst of creatures in all the nations and She marked Her dear children, and those who must not be touched by the scourges.  Each one my Celestial Mama touched, the scourges had no power to touch those creatures.  Sweet Jesus gave the right to His Mama of placing in safety whomever She pleased.  How moving it was to see the Celestial Empress going around through all the parts of the world, that She took them in Her Maternal Hands, She entrusted them to Her bosom, she hid them under Her Mantle, so that no evil could harm those whom Her Maternal Goodness kept in Her custody, guarded and defended.  O! if everyone could see with how much Love and Tenderness the Celestial Queen did this office, they would cry from consolation, and they would Love She who Loves them so much.

Permanent link to this article: https://luisapiccarreta.com/716-feast-of-the-brown-scapular-1251/