Blessed Wishes on the Feast Day of St. Benedict to

The Benedictine Daughters of the Divine Will! 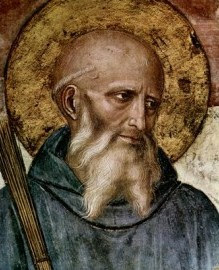 Saint Benedict, the Father of Western monasticism was born in Nursia, Italy about 480 AD, and educated in Rome. He was repelled by the vices there and in 500, fled to Enfide, thirty miles away. Benedict lived as a hermit. settling in Subiaco  where he resided in a cave for three years, fed by a monk named Romanus. Despite Benedict’s desire for solitude, his holiness and austerities became known and he was asked by a community of monks at Vicovaro to be their abbot He accepted, but when the monks resisted his strict rule and tried to poison him, he returned to Subiaco which became a center of spirituality and learning.

A few years later Benedict left Subiaco to found the abbey of Monte Cassino on the heights of Campania. There he wrote his Rule of Benedict in which he combined the Roman genius and the monastic wisdom of the Christian East. St. Benedict died in 547.

The Life of St. Benedict

Born in Nursia, Italy, he was educated in Rome, was repelled by the vices of the city and in about 500 fled to Enfide, thirty miles away. He decided to live the life of a hermit and settled at mountainous Subiaco, where he lived in a cave for three years, fed by a monk named Romanus.

Despite Benedict’s desire for solitude, his holiness and austerities became known and he was asked to be their abbot by a community of monks at Vicovaro. He accepted, but when the monks resisted his strict rule and tried to poison him, he returned to Subiaco and soon attracted great numbers of disciples. He organized them into twelve monasteries under individual priors he appointed, made manual work part of the program, and soon Subiaco became a center of spirituality and learning. He left suddenly, reportedly because of the efforts of a neighboring priest, Florentius, to undermine his work, and in about 525 settled at Monte Cassino.

He destroyed a pagan temple to Apollo on its crest, brought the people of the neighboring area back to Christianity, and in about 530 began to build the monastery that was to be the birthplace of Western monasticism. Soon disciples again flocked to him as his reputation for holiness, wisdom, and miracles spread far and wide. He organized the monks into a single monastic community and wrote his famous rule prescribing common sense, a life of moderate asceticism, prayer, study, and work, and community life under one superior. It stressed obedience, stability, zeal, and had the Divine Office as the center of monastic life; it was to affect spiritual and monastic life in the West for centuries to come.

While ruling his monks (most of whom, including Benedict, were not ordained), he counseled rulers and Popes, ministered to the poor and destitute about him, and tried to repair the ravages of the Lombard Totila’s invasion. He died at Monte Cassino on March 21.

Excerpted from the Dictionary of Saints, John J. Delaney

O God, who made the Abbot Saint Benedict an outstanding master in the school of divine service, grant, we pray, that, putting nothing before love of you, we may hasten with a loving heart in the way of your commands. Through our Lord Jesus Christ, your Son, who lives and reigns with you in the unity of the Holy Spirit, one God, for ever and ever. Amen.

Permanent link to this article: https://luisapiccarreta.com/711-feast-day-of-st-benedict-abbot/