6/15 – Blessed Birthday Wishes in The Divine Will to Fr. Bernardino Giuseppe Bucci! 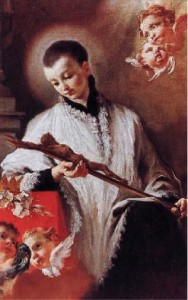 R. I, thy most unworthy client, * commend to thee most earnestly * the chastity of my mind and body.

V. I beseech thee, for the sake of thine angelic purity,

R. To commend me to the immaculate Lamb, * Christ Jesus (☨), * and to His most holy Mother, * the Virgin of virgins; * and to protect me from every grievous sin.

R. Permit me not to defile myself by any spot of impurity; * nay, when thou seest me in temptation * or in the danger of sin, * banish far from my heart * every unclean thought and desire.

V. Awaken in me the thought of eternity and of Jesus (☨) crucified;

R. imprint deeply in my heart * a lively sense of the holy fear of God; * set me on fire with the love of God; * grant me the grace to imitate thee on earth * that I may worthily enjoy the possession of God * in heaven with thee. * Amen.

Marian Prayer of Saint A. Gonzaga

R. Into thy blessed trust and custody, * and into the care of thy mercy * I this day, every day, * and in the hour of my death, * commend my soul and my body. * To thee I commit all my anxieties and miseries, my life and the end of my life, * that by thy most holy intercession * and by thy merits * all my actions may be directed and disposed * according to thy will * and that of thy Son. Amen.

O most innocent and pure St Aloysius Gonzaga, by thy illustrious merits we beseech thy gracious intercession before the throne of Almighty God, that He may grant us:

(Pause and state your intentions)

V. If it be for the greater glory of God and our sanctification.

V. Let us pray. O God, the Giver of all heavenly gifts, who in the angelic youth, Aloysius, didst join wondrous innocence with equal penance: be entreated by his merits and his prayers and grant unto us who have not followed him in his innocence the grace to imitate him in his penance. We ask this through Christ our Lord.

When her Cause for Beatification and Canonization was officially proposed, Cardinal  Joseph Ratzinger (now Pope Emeritus Benedict XVI),  at that time the Prefect of the Congregation for the Doctrine of the Faith, nullified the previous condemnations of the Index, thereby removing the impediment to her Cause. Thus on the Feast of Christ the King, Sunday November 20, 1994, the process for the Cause of the Servant of God, Luisa Piccarreta, was finally opened.

On June 11, 2010 the First Theologian gave full approval for the Writings of the Servant of God Luisa Piccarreta.

The second theologian assigned to evaluate the writings of Luisa Piccarreta by the Vatican Congregation for the Causes of the Saints has also given a positive, that is, a favorable judgement. This means that both of the official censors librorum for the cause of Luisa have found nothing contrary to the faith in her writings, and her cause can now go forward.

“We are glad to inform you that the second Theologian, which the Holy See had appointed to review the Writings of the Servant of God Luisa Piccarreta, has completed his task and given his approval.”

On July 24, 2010 it was officially announced that the two Theological Censors appointed by the Holy See to review the Writings of the Servant of God Luisa Piccarreta had given their approval

(Note: This has been posted previously, but it is well worth repeating)

“The Archbishop, therefore, blesses all prayer groups inspired by Luisa Piccarreta, but does not intend to assume responsibility for them, which is deferred to the ordinary authorities of each place for the verification of their authenticity and orthodoxy.  It would be desirable that these be guided by prudent priests, and of proven orthodoxy.”

The importance of priests teaching the spirituality of Luisa can also be found in other letters published by Trani. For example, the talk given by Archbishop Picherria on October 27, 2005 at the Corato Congress, he states the following:

“As Pastor of this beloved Church I feel the responsibility . . . of showing them to the sister Dioceses, where there are present groups who are inspired by the Divine Volition, directing myself to the Brother Pastors—those who have the duty of overseeing so that one is not led astray—the thinking contained in the writings of Luisa, accepting the reliable studies of theologians who present them with a critical and correct preparation according to the sound doctrine of the Church; . . .”

In Protocol No. 31/06VGG, Archbishop Piccheria has left the enforcement of guidelines to local bishops where Divine Will Prayer Groups are located and functioning:

“. . . those who talk about Luisa Piccarreta must have the il nulla osta of the Bishop of the place where there are groups of the Divine Will or where one is invited to guide groups of spirituality.”

The reason for this guideline can be found in the following excerpt taken from the March 9, 2006 letter of Archbishop Picchieri of Trani, which may allude to the January 22, 1998 letter issued by his predecessor Archbishop Carmelo Cassati to seven promoters of Luisa concerning an incident reported by William G. Bilton to Arthur & Joanne Kirby, April 04, 1997:

. . .  “All of you who have taken part in the meeting of October, certainly feel as one called and feel a duty shared with everyone in the Church, the Spirituality lived by Luisa.

Nevertheless, the experiences of these years says to us that the Doctrine of the Divine Will has not always been presented in a respectful and correct way, according to the Doctrine and the Magisterium of the Church, placing in the mouth of Luisa statements that one does not find even implicitly in her writings.  This causes trauma in consciences and even confusion and refusal in the people and among the Presbyteries and Bishops.

Other times they distort certain essential themes or points of this spirituality,presenting them outside of the context and the totality of the writings. They make unauthorized deductions or conclusions; subjective thoughts are given as objective truth, or else they emphasis secondary aspects as if they were essential, in this way distorting the substance and diverting attention to less important things.  From this is the need of seeing possible deformations, inaccurate interpretations, imprudent or inappropriate teachings, in order to correct them and to present everything in full conformity with the Doctrine of the Church.”

Permanent link to this article: https://luisapiccarreta.com/6-12-novena-to-st-aloysius-gonzaga/