5/7 THE SEVEN GIFTS OF THE HOLY GHOST

5/9 Jesus pours in Luisa so much grace, so much love as to make Luisa surpass all other creatures 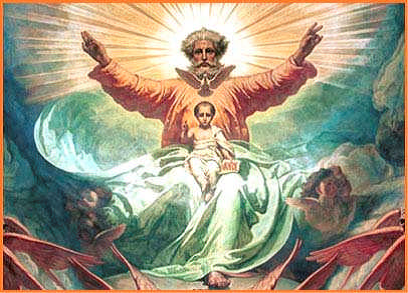 For the Lord himself shall come down from heaven with commandment (a shout), and with the voice of anarchangel, and with the trumpet of God: and the dead who are in Christ, shall rise first.

…See then, how necessary it is that my Will be known in all of Its relations, prodigies, effects and value – what I did in this Will for the creatures, and what they must do. This knowledge will be a powerful magnet in order to attract the creatures and make them receive the inheritance of my Will, and so as to make the generation of the children of light enter the field. Be attentive, my daughter; you will be my spokesperson – the trumpet, to call them and gather this generation, so beloved and longed for by Me.”…(also August, 4, 1926 ) First I make the preparations, I form in you all the properties of It, and then I speak to you, so that, by feeling Its properties within yourself, you may be the spokesperson of my Will, the crier of It, Its telegraph and the little trumpet which, with a shrill sound, may call the attention of those passing by to listen to you.

…. Jesus told me: “My daughter, to all you have said on fusing yourself in my Will, another application must be added – that of fusing yourself in the order of grace, in all that the Sanctifier – the Holy Spirit – has done and will do to those who are to be sanctified. Furthermore, while We – the Three Divine Persons – remain always united in working, if Creation is related to the Father, and Redemption to the Son – the “Fiat Voluntas Tua” was attributed to the Holy Spirit. And it is exactly in the “Fiat Voluntas Tua” that the Divine Spirit will display His Work…..”

The third Fiat will bring to completion the glory and the honor of the Fiat of Creation, and will be confirmation and development of the fruits of the Fiat of Redemption. These three Fiats will conceal the Most Holy Trinity on earth.

… while I was praying, my sweet Jesus leaned His head against Mine, sustaining His forehead with His hand; and a light coming from His forehead told me: “My daughter, the first Fiat was pronounced in Creation with no intervention of creature. The second Fiat was pronounced in Redemption; I wanted the intervention of the creature, and I chose my Mama for the completion of the second Fiat. Now, for the fulfillment of both, I want to pronounce the third Fiat, and I want to pronounce It through you; I have chosen you for the fulfillment of the third Fiat. This third Fiat will bring to completion the glory and the honor of the Fiat of Creation, and will be confirmation and development of the fruits of the Fiat of Redemption. These three Fiats will conceal the Most Holy Trinity on earth, and I will have the Fiat Voluntas Tua on earth as it is in Heaven. These three Fiats will be inseparable – each one will be life of the other. They will be one and triune, but distinct among themselves. My Love wants it, my Glory demands it: having unleashed the first two Fiats from the womb of my Creative Power, It wants to unleash the third Fiat because my Love can no longer contain It – and this, in order to complete the work which came from Me; otherwise, the works of Creation and of Redemption would be incomplete.” On hearing this, I was not only confused, but stunned, and I said to myself: ‘Is all this possible? There are so many. And if it is true that He has chosen me, it seems to me that this is one of the usual follies of Jesus. And then, what could I do or say from within a bed, half crippled and inept as I am? Could I ever face the multiplicity and infinity of the Fiat of Creation and of Redemption? Since my Fiat is similar to the other two Fiats, I must run together with them, multiply myself with them, do the good which they do, braid myself with them… Jesus, think of what You are doing! I am not for this much.’ But who can tell all the nonsense that I was saying?

Now, my sweet Jesus came back and told me: “My daughter, calm yourself – I choose whomever I please. However, know that I begin all of my works between Myself and one creature; and then they are spread. In fact, who was the first spectator of the Fiat of my Creation? Adam, and then Eve. It surely wasn’t a multitude of people. Only after years and years did crowds and multitudes of people become spectators of It. In the second Fiat my Mama was the only spectator; not even Saint Joseph knew anything, and my Mama found herself more than in your condition:

the greatness of the Creative Power of my work which She felt within Herself was such that, confused, She did not feel the strength to mention it to anyone. And if, then, Saint Joseph knew it, it was because I manifested it to him. So, this Fiat germinated like a seed within Her virginal womb; the ear of grain was formed in order to multiply It, and then It came to the light of day. But who were the spectators? Very few. In the room of Nazareth my dear Mama and Saint Joseph were the only spectators. Then, when my Most Holy Humanity grew up, I went out and I made Myself known – but not to all. Afterwards, It spread more, and It will still spread. So will the third Fiat be. It will germinate within you; the ear of grain will be formed; only the priest will have knowledge of It. Then, a few souls – and then, It will spread. It will spread, and will follow the same path as Creation and Redemption. The more crushed you feel, the more the ear of the third Fiat grows and is fecundated in you. Therefore, be attentive and faithful.”

While the world wants to cast Jesus away from the face of the earth, He is preparing an Era of Love: the Era of His third Fiat.

This morning, after receiving Communion, I heard in my interior my always lovable Jesus saying: “O iniquitous world, you are doing everything you can to cast Me away from the face of the earth, to banish Me from society, from schools, from conversations – from everything. You are plotting how to demolish temples and altars, how to destroy my Church and kill my ministers; while I am preparing for you an Era of Love – the Era of my third Fiat. You will make your own way in order to banish Me, and I will confuse you by means of Love. I will follow you from behind, and I will come toward you from the front so as to confuse you in Love; and wherever you have banished Me, I will raise my throne, and there will I reign more than before – but in a more astonishing way; so much so, that you yourself will fall at the foot of my throne, as though bound by the power of my Love.”

Then He added: “Ah, my daughter, the creature rages more and more in evil! How many machinations of ruin they are preparing! They will reach the point of exhausting evil itself. But while they are occupied with following their own way, I will be occupied with making the Fiat Voluntas Tua have Its completion and fulfillment, and my Will reign upon the earth – but in a completely new way. I will be occupied with preparing the Era of the third Fiat in which my Love will show off in a marvelous and unheard-of way. Ah, yes, I want to confuse man completely in Love! Therefore, be attentive – I want you with Me, in preparing this Celestial and Divine Era of Love. We will lend a hand to each other, and will work together.” ….

Jesus changes the state of victim of Luisa, in order to prepare the Era of His Will.

… “My daughter, the third Fiat- my ‘Fiat Voluntas Tua, on earth as it is in Heaven’ – will be like the rainbow which appeared in the sky after the deluge, which, as rainbow of peace, assured man that the deluge had ceased. So will the third Fiat be. As It comes to be known, loving and disinterested souls will come to live in my Fiat. They will be like rainbows – rainbows of peace – which will reconcile Heaven and earth, and dispel the deluge of so many sins which inundate the earth. These rainbows of peace will have the third Fiat as their own life; therefore my ‘Fiat Voluntas Tua’ will have Its completion in them. And just as the second Fiat called Me upon earth to live among men, the third Fiat will call my Will into souls, and It will reign in them ‘on earth, as in Heaven’.”

Then, since I was sad because of His absence, He added: “My daughter, be cheered – come into my Will. I chose you among thousands and thousands, so that my Will may have full completion in you, and so that you may be like a rainbow of peace which, with its seven colors, attracts others to live in my Will. Therefore, let us leave the earth aside. Up until now I have kept you with Me in order to appease my Justice and prevent greater chastisements from being poured upon the earth. Now, let us allow the current of human evil to run; I want you with Me, in my Volition, to be occupied with preparing the Era of my Will.

As you move forward on the path of my Volition, the rainbow of peace will form, which will form the link of connection between the Divine Will and human will. From it, my Will will have life on earth, and this will begin the fulfillment of my prayer, and the prayer of the whole Church: ‘Thy Kingdom come, Thy Will be done, on earth as It is in Heaven’.”

Permanent link to this article: https://luisapiccarreta.com/58-the-third-fiat/